Fellow Powerpuff Girls (crime-fighters and book devourers) Blossum aka Katiebabs and Bubbles aka Ana team up one more time to read and review a book of their choosing. (Their friend Buttercup aka Thea is still AWOL, word on the grapevine reports she was last seen trying to destroy copies of Terminator: Salvation with the help of both Gambit and Batman. ) . You know the drill: Ana posts here, Katie posts at hers. You can read her thoughts here 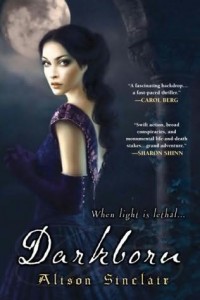 Summary:For the Darkborn, sunlight kills. For the Lightborn, darkness is fatal. Living under a centuries-old curse, the Darkborn and the Lightborn share the city of Minhorne, coexisting in an uneasy equilibrium but never interacting. When Darkborn physician Balthasar Hearne finds a pregnant fugitive on his doorstep just before sunrise, he has no choice but to take her in. Tercelle Amberley’s betrothed is a powerful Darkborn nobleman, but her illicit lover came to her through the daytime. When she gives birth to twin boys, they can see, something unheard of among the Darkborn. When men come for the boys, Balthasar is saved by the intervention of his Lightborn neighbor—and healed by the hands of his wife, Telmaine. Soon he finds himself drawn deeper into political intrigue and magical attacks, while Telmaine must confront a power she can no longer keep sheathed in gloves, a power she neither wants nor can control.

Why did I read the book: The cover caught my attention when Kmont blogged about upcoming books at Lurve a la Mode a few months ago. Then a couple of weeks past, M the Apprentice Writer emailed me telling me I HAD to read the book. I eagerly complied.

Minhorne is a city divided by sunrise and sunset. Its inhabitants, cursed centuries ago by a mage called Imogene, are either Lightborn or Darkborn. Darkness is lethal to the Lightborn as Light is lethal to the Darkborn. Separated by their biology (Darkborn are blind for example) they are also apart in their way of living. The Darkborn society comes to life after sunset and is a more traditional one, where women are expected to be no more than wives and mothers, magic is frowned upon and science and mechanics plays a larger role; contrary to the Lightborn society who comes to life after sunrise and where women can be spies and assassins and magic is fully accepted. (This mix of historical with mechanics and magic reads a lot like Steampunk by the way). Both Lightborn and Darkborn fear the Shadowborn although little is known about them – they live in the outskirts of society, apart from Light and Dark.

In this background, the lives of a group of citizens –both Lightborn and Darkborn is about to change when a Darkborn lady, fiancée to a powerful lord gives birth to twins with the help of Balthasar, a Darkborn physician who offers succour when she comes knocking at his door at the brink of sunrise. Telling a, ludicrous according to Bal, story of unwilling seduction by a shadowy figure that came to her in daytime, the woman’s children are a miracle because they are sighted which may well prove that the lady was telling the truth.

But before any further investigation can be done, the kids are taken away for adoption and as soon as that happens Balthasar is attacked by thugs in his own home, they are looking for them. He endures a most horrendous beating but gives no information and is left to die. Unbeknownst to him, his wife Telmaine is arriving from visiting her parents at that very moment. And the unthinkable happens – his eldest daughter is taken, kidnapped from her mother’s arm. Telmaine rushes to Balthasar’s side and with the help of Baron Ishmael di Studier , she uses magic to heal him. And now they must do anything to get their daughter back, in a world full of political intrigue, prejudice against magic, they try to fight against an unknown enemy that spreads death and who wants the sighted twins. As the narrative alternates between Balthasar, Telmaine and Ishmael, we are granted with a Darkborn view of the world.

Darkborn is a complex book with many layers. The first layer – the framework of Darkborn x Lightborn is an interesting one. As much as they are separated by light and dark they do share something in common: magic. Regardless of the fact that the Darkborn abhor and fear the mages, the truth is that a lot of them are mages, which points to the reality of their shared past as one race. I loved little details such as the Sunrise Bells and the Sunset Bells that would toll at the appropriate time. I would have loved to know more about the Lightborn but I guess that will come with the next book – Lightborn.

Similarly, the next layer, the plot involving the twins and the Shadowborn is full of intrigue, mystery and action. Although little in the way of answers is given as the plot is clearly one that will carry on to the next two books in the series.

But really, the best part of the book is the characters and their relationships with each other. Balthasar is a physician who specialises in something close to psychology. He is kind and good-natured. Ishmael on the other hand, has a foot firmly set on the dark side since he lives in the outskirts of society chasing shadows away (literally.). He is scarred, internally and externally and he is a well-known mage. Telmaine is a traditionalist, a well-born aristocratic lady who married under her station and that was the only step she ever took away from tradition. In everything else she conforms: she is especially conformist to her peers when it comes to mages. Her biggest secret and shame is that she is one herself. But ever since she discovered this truth when she was little, she hides it. She wears gloves all the time (because she can touch-feel and touch-heal) and her explanation for them is that she has a phobia. When her daughter goes missing, the mother in her will do anything in her power to get her back, even if it means accepting her own powers. Which she does with the help of Ish, who she can’t help but to feel attracted to given that for the first time someone, another Darkborn KNOWS her secret and shares it with her.

The most fascinating character to me though was one that was a secondary with very little page-time. Balthasar’s Lightborn next door neighbour Lady Floria White Hand, assassin and spymistress for the Lightborn princes. She and Balthasar have a most fascinating relationship since they were children, but they never ever even saw each other. At the top floor of their house, their rooms are separated by a paper wall that won’t let light or dark across but which will carry their words. Their friendship (and perhaps something more than that) is riveting and I hope to read more about it.

This is a good Fantasy book but I did find that I liked it less than I thought I would. For all its engaging mystery, characters and setting, I thought there was a je ne sais quoi missing. I can’t exactly pin-point it but I think this lacking made it possible for me to question things that I am sure I was not supposed to. For example: the physics behind the way the Darkborn “saw”. In fact they do not “see” anything given that they are blind. But their biology has been changed and an anatomic “device” has been incorporated to their eyes: the sonn. This is interesting because every time the verbs “to see” or “to look” would have been used, they were replaced with “to sonn”. The sonn basically assembles “echoes of unseen sound”. The Darkborn see no colours or transparency ,their awareness expand solely based on the limits of their sonn – they cannot see , or rather, sonn the stars for example. Their eyes have nerve impulses or frequencies. So how exactly, can they tell facial expressions when people are not moving or talking? How can they READ? Because several characters are shown reading and I can’t for the life of me, understand how as letters do not emit sounds or move. I mean, I am no scientist but I live with a physics teacher so enquiring minds want to know.

Another thing that I wondered: if the Darkborn abhor magic and magicians can even be arrested how is it that there are school for mages where they can learn and train? I also asked myself about Telmaine and her “phobia”: she was married to a psychologist, did he not ever try to treat her? Did he not ever wonder about whether it was true or not?

But my main problem with the book was really Telmaine and her story arc. She was by all means a fascinating character. Her worries and fears about her magic were realistic, her love for her husband true and poignant, her devotion to her family and children great. But as soon as she meets Ishmael it all comes into jeopardy far too easy, far too fast. In a matter of four days – that is the timeframe within the book – she becomes a most powerful mage who knows, basically instantly how to use her powers but also she falls in love with Ishmael. I would not begrudge her that if there was more time – even though she loves Balthasar, Ishmael is a light at the end of the tunnel, someone who can understand her at a basic level and I completely get the attraction here. But I have to object to her spending time, wasting her thoughts on how Ishmael’s tender kiss felt right or how she was falling in love with him whilst her beloved daughter was missing and whilst her husband, the husband she loved, cared for and how absolutely adored her is lying in bed after almost being killed. That just did not sit well with me, mostly because I felt it was out of character especially since less than 4 days ago she was immensely happy in her marriage and completely dedicated to her family. Given that this is a story that is taking place in three books, I feel I could have been spared the word “love” with regards to Ish and Telmaine. The love triangle could have started in this book, with a serious infatuation between the characters, but “love” felt too soon especially with everything that was going on besides and her clear love for Balthasar . I just didn’t buy it.

Let it be known that even with these grippes, I did like the book. In the end, the balance of what worked and what did not work, the former wins by a wide margin and I really want to read more about this world and its inhabitants, particularly Lady Floria.

This is it for me today! Now go read Blossum’s review.

Notable quotes/ Parts: All scenes between Floria and Balthasar and Telmaine and Balthasar. Telmaine walking through fire (literately) to get her daughter back.

Reading next: Salt and Silver by Anna Katherine