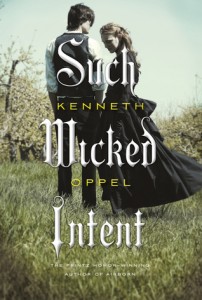 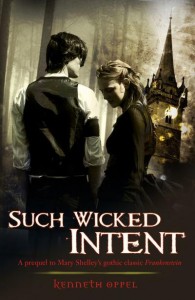 Devotion turns deadly in this second Gothic thriller from Kenneth Oppel.When does obsession become madness? Tragedy has forced sixteen-year-old Victor Frankenstein to swear off alchemy forever. He burns the Dark Library. He vows he will never dabble in the dark sciences again—just as he vows he will no longer covet Elizabeth, his brother’s betrothed.

If only these things were not so tempting.

When he and Elizabeth discover a portal into the spirit world, they cannot resist. Together with Victor’s twin, Konrad, and their friend Henry, the four venture into a place of infinite possibilities where power and passion reign. But as they search for the knowledge to raise the dead, they unknowingly unlock a darkness from which they may never return.

Stand alone or series: Book 2 in the Apprenticeship of Victor Frankenstein series

Why did I read this book: I am a huge fan of Kenneth Oppel’s writing, and loved This Dark Endeavor intensely. Thus, Such Wicked Intent was one of my most highly anticipated books of 2012.

**WARNING: This review contains unavoidable spoilers for the first book in the Victor Frankenstein series. If you have not read This Dark Endeavor and do not wish to be spoiled, LOOK AWAY.**

It has been weeks since Konrad’s death, and Chateau Frankenstein is frozen in a state of cold grief. Victor’s failed concoction – the elixir of life, brewed at much danger and cost Victor the fingers of his left hand – is a bitter blow. In his grief and rage, Victor turns away from alchemy and burns every book from the chateau’s Dark Library – all except for one book, which survives the flames. This book holds the key to another obsession and the hidden history of Chateau Frankenstein’s original patriarch, the enigmatic Wilhelm Frankenstein. Victor’s ancestral home holds many more secrets, from ancient caves beneath the home’s foundation, further hidden passages and secret rooms, and even a key to the realm of the dead. Using the notes and tools left behind by Wilhelm, Victor and friends Elizabeth and Henry unlock a way into the spirit world, where they are overjoyed to find Konrad, waiting in a kind of limbo.

Once again, Victor vows to save his twin brother and find a way to bring him back to the world of the living, using the occult arts and the knowledge he amasses in the spirit realm. But something else in the spirit world longs for life and light, and will use Victor’s obsessions, his jealousies, and his schemes to accomplish its own ends.

The second book in the apprenticeship of Victor Frankenstein series, Such Wicked Intent is every bit as well-written and haunting as This Dark Endeavor…if somewhat less satisfying. Whereas This Dark Endeavor focused on alchemy and the kindling of Victor Frankenstein’s obsession with the shadowy reaches of science, Such Wicked Intent absconds the sciences completely and shifts its focus to the occult and actual magic. I’m not sure how effective this switch is, or how in line with Mary Shelley’s text (which, after all, is the end goal this series is building towards). Traveling to the spirit world and resurrecting the souls of the dead in golems made of mud and bone seems a trifle more magical and sophisticated than Victor’s ultimate creation, his Modern Prometheus hewn from the bodies of men, and activated with his understanding of the alchemy, science, and electricity. The question of the unquestionably supernatural flavor of this second novel aside, there’s no question of Oppel’s skill as a storyteller, as Such Wicked Intent is a compulsively readable book with formidable monsters, twists, and incredibly effective character building – I’m just not entirely convinced that I liked the book.

Take the characters, for example. In this second installment, Victor’s passions burn even brighter, his schemes and manipulations more pronounced, his arrogance and hubris all the more glaring even after losing his twin. Victor is so consumed with his quest for knowledge and power, at the cost of anyone in his way, that it’s hard to feel any affinity for the character. He vows to save Konrad, but soon is making plans to ship the resurrected Konrad away from his family so that he can steal Elizabeth’s affections for himself. By the book’s end, there is some redemption for Victor – but it’s becoming increasingly hard to stomach him as a character. But perhaps that is ok, for likability is irrelevant – we all know Victor’s future and his fate, after all. But I can’t help but feel like we need something more, that we need something to root for Victor, ultimately. But perhaps that’s just me.

Victor aside, it’s hard to like any of the characters in this second book – Elizabeth in particular is frustrating in that she is the perpetual object of obsession, not just for Victor and Konrad’s ghost, but now also for Henry Clerval.[1. Yes, seriously, there is a new overlapping love triangle in this book between Henry, Elizabeth and Victor. In addition to one between Victor, Elizabeth, and Konrad. And Konrad, Elizabeth, and the spirit of a girl named Analiese. No thank you.] Additionally, Henry is given credit for one of Lord Byron’s most famous poem “She Walks in Beauty,” supposedly penning this piece for Elizabeth.[2. While I appreciate this nice allusion to Mary Shelley’s relationship with Lord Byron, attributing the poem to a lovestruck teenage Henry Clerval about Elizabeth is rather annoying.] And it’s not just Konrad, Victor, and Henry lusting/fighting over Elizabeth, either – even the long dead supreme spirit of a past boogeyman (and a violent golem in Konrad’s form) longs for her. This is Elizabeth’s role in the series – to be fought over and desired by all she meets. Not my favorite type of storyline or heroine.

These criticisms regarding characterization said, Such Wicked Intent is a beautifully written book and a bonafide page turner. The idea of the spirit world, of the secret caves beneath Chateau Frankenstein and the people who built these burial chambers, is fantastic. The monster of this piece (and some very creepy butterflies) is terrifying and original. I’m not exactly sure if the existence of the spirit world or of Chateau Frankenstein’s place in it ultimately makes sense, but this otherworldly storyline is haunting and effective stuff.

Suffice it to say, my feelings for Such Wicked Intent are conflicted. I appreciate, as always, Kenneth Oppel’s obvious skill as a writer and storyteller. I also appreciate his daring to create a conflicted and decidedly un-likable protagonist. I appreciate these things, but ultimately, I can’t say I loved this book. I’ll be around for Victor’s next dark obsession, though, with a wary eye.

THE BOOKS FLEW OPEN LIKE STARTLED BIRDS TRYING TO escape the flames. One after the other I savagely hurled them into the hottest part of the bonfire, watching them ignite almost before they landed.

We’d hauled everything out of the Dark Library, every alchemical tome, every grimoire, every glass vial and earthenware mortar. Father had ordered that it all be destroyed, and he’d enlisted the help of only our most trusted servants. But even with their assistance it had taken us many hours to carry it all out into the courtyard.

It was well past midnight now. There were no more books left to add to the conflagration, but my body still craved things to tear and throw. I prowled the margins of the fire with a shovel, flinging half-burned debris back into the center of the inferno. I was hungry for destruction. I looked at my father, the servants, their faces pale and terrible in the dancing light and shadow.

Pain throbbed from the stumps of my two missing fingers. The heat seared my face and brought water to my eyes. There was nothing remarkable about this bonfire, no spectral lights, no demonic whiff of brimstone. It was just cracked glass and burning paper and ink and reeking leather. The smoke lifted into the dark autumn sky, carrying with it all the lies and false promises I’d foolishly believed would save my brother.

Additional Thoughts: Today we are a stop on the official Such Wicked Intent blog tour and have Kenneth Oppel over for a guest post today!

You can check it out HERE.

Reading Next: The Raft by S.A. Bodeen

Anthology Review: It Happened One Night