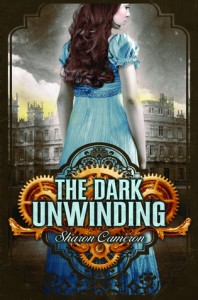 A spine-tingling tale of steampunk and spies, intrigue and heart-racing romance!

When Katharine Tulman’s inheritance is called into question by the rumor that her eccentric uncle is squandering away the family fortune, she is sent to his estate to have him committed to an asylum. But instead of a lunatic, Katharine discovers a genius inventor with his own set of rules, who employs a village of nine hundred people rescued from the workhouses of London.

Katharine is now torn between protecting her own inheritance and preserving the peculiar community she grows to care for deeply. And her choices are made even more complicated by a handsome apprentice, a secretive student, and fears for her own sanity.

As the mysteries of the estate begin to unravel, it is clear that not only is her uncle’s world at stake, but also the state of England as Katharine knows it. With twists and turns at every corner, this heart-racing adventure will captivate readers with its intrigue, thrills, and romance.

How did we get this book: We both picked up ARCs at BEA

Why did we read this book: Both of us were intrigued by the premise of the book (steampunk and spies? OK!), and when we saw that this title would be at BEA, it quickly made our list of ARCs To Get Or Else. (Of course, this book doesn’t have much of anything to do with steampunk or spies…but more on that below.)

Katherine Tulman has been given a simple task by her horrible Aunt Alice: she must go to her eccentric uncle’s estate in order to determine whether he should be committed to an asylum or not. They fear he has been squandering the family’s fortune – to be inherited by Aunt Alice’s young son one day. Although Katherine has no reason to be loyal to her loathsome Aunt, she also has no other option as she is Alice’s ward and as such is wholly dependent on her for survival. Katherine is determined, for her own sake, to do what is necessary to ensure her cousin’s inheritance.

When she arrives at the estate she realises that her uncle is a genius inventor but definitely someone who is unfit to run the state. He has been so for as long as anyone can remember but his mother (Katherine’s grandmother) has put a system in place to help things along; not to mention that Uncle Tully has friends and caretakers who deeply care for him.

Then weird, inexplicable events around the estate make Katherine question her own sanity and as the mysteries unfold, and the clock ticks down, Katherine must make a decision and soon.

At its core The Dark Unwinding is a simple Gothic tale and it has mystery elements which unfold well (if a bit predictably). The setting of Uncle Tully’s estate, the surrounding countryside all work well to provide a great sense of atmosphere. One of the best aspects of this story is how Katherine is taken by surprise several times by weird events and the narrative mirrors this by following her point of view and her point of view alone – and as such, the reader is left feeling as lost as Katherine. That could have been a confusing mess but the author avoids this with aplomb.

Despite the apparent simplicity of the story and the predictability of the plot (I knew exactly how the story would end), I enjoyed The Dark Unwinding to a great extent and this enjoyment can be explained by the prose (which I loved) and the characters, especially Katherine. I loved her pragmatism and her matter-of-fact way of addressing her problems and her situation. I loved that it took her quite a long time to decide what she would do. I loved her struggle between having to fend for herself (was always foremost in her thoughts) and finding herself falling for the people at her Uncle Tully’s estate. I also enjoyed the secondary romantic storyline – the romance develops slowly and subtly, just the way I like.

Just one small nitpicky note. It made me flinch every time Katherine thought about her young cousin as Fat Robert – which she did several times over the course of the book (there was a lot of flinching).

And last but least: the blurb promises a “tale of Steampunk”. I just wanted to say, once more WITH FEELING: there is absolutely nothing AT ALL that could possibly classify this book as Steampunk. It doesn’t even feature the bare minimum: it is not alternate history; it does not have advanced technologies for the time. Repeat after me: ONE inventor does not Steampunk make, people. This is not hard.

There is a lot going for The Dark Unwinding and although I can’t really say I am super enthused about it, I still thought it was a solid, enjoyable read.

I am somewhat more enthused than Ana. I loved The Dark Unwinding for the straightforward gothic novel that it is – the mystery of an estate that guards a precious secret, and a pragmatic girl’s coming of age story.

From a storytelling perspective, I was predisposed to like The Dark Unwinding from its opening sentence: “Warm sun and robin’s-egg skies were inappropriate conditions for sending one’s uncle to a lunatic asylum.” Sharon Cameron has a gift for worthsmithing and storytelling, and this novel’s prose is far and away superior to the many YA Victorian/Gothic titles out there today. Not once does Katherine’s narration slip into modern anachronisms, and her voice overall is convincing not only to the time, but to her character. There’s also a refreshing polished quality to the writing, and a sense of slow, careful pacing that I admire – though this book probably will be too slow for some, I liked the long burn approach to simmering tensions.

The plot itself may have a degree of familiarity, but I personally felt that this familiarity was more of an homage – there’s a lot of Jane Eyre in The Dark Unwinding, in the character of Katherine (orphaned with no inheritance, living with a cruel Aunt), to the windblown isolated setting of her Uncle Tully’s estate. And while one might guess the reason for Katherine’s odd behavior before the reveal in the novel, there are a few twists that came unseen – at least, unseen to me! I love the way the the story plays out, when our duplicitous villain is revealed and motives unmasked. I also loved the particular expression of Uncle Tully’s “lunacy” (which of course isn’t lunacy at all, but a form of autism/savant syndrome), and his many clockwork creations and inventions.[1. Though, it must be repeated: the inclusion of clockwork machines in a story does NOT mean a book is steampunk. Marketing copy FAIL.]

Of course, the other great boon to The Dark Unwinding is the character of Katherine herself. I have to fully agree with Ana in that I loved Katherine’s character – I love that she is pragmatic and doesn’t rush to any conclusions regarding her Uncle’s estate and her next course of action. I like that when she finally discovers just how deep Uncle Tully’s expenditures reach into her cousin Robert’s inheritance, she forms her own strategy. There’s great tension between gothic horror/haunting and Katherine’s fear for her own sanity explored in her character arc, just as there’s a strong coming of age arc. The most compelling thing about Katherine’s story, to me, is her strength in finding control and power in situations where she seemingly has none. She begins the book as a girl of seventeen with schemes to one day siphon enough money away from her cousin’s books (as she is in charge of the finances, at her aunt’s insistence) to gain some measure of freedom – but never really having the sand to actually put that plan into motion. When she discovers her uncle’s state and his creation of an industry entirely his own, Katherine part runs-away from her looming responsibility and terrible choice of putting a thousand men, women and children out of work by ignoring her Aunt. Finally, as events come to a climax in the novel, Katherine finally chooses to take action, completely of her own volition. That, to me, is an awesome thing.

Finally, I should mention that The Dark Unwinding features a strong romantic subplot that is wonderfully, skillfully executed, refreshingly free of the predictable romantic formulae that characterizes many other YA novels in this category. I love that the romance builds slowly, and ends unpredictably – as I said to Ana in an email: “I really love the way things ended though and the restraint with the love story. *LOVE* IT IS THE BEST. MORE YA. DO THIS. THIS.”

I truly loved The Dark Unwinding – it’s one of those books that get better upon reflection (and a sleeper for my best of/most notable reads of 2012 list). Absolutely recommended.

Warm sun and robin’s-egg skies were inappropriate conditions for sending one’s uncle to a lunatic asylum. I had settled this point four hours earlier, while miles of road slipped beneath the carriage wheels. The clouds, to my way of thinking, should have turned themselves black, should have rumbled and crashed, and flung needles of rain at the trees. But there they lazed, the errant things, like tufts of discarded goose down, shadowing the slopes of the passing moors. I removed my gaze from the window. The weather was most insensible.

Reading Next: Reefsong by Carol Severance