Book Review: Wheel of the Infinite by Martha Wells

Title: Wheel of the Infinite

Publisher: Eos (but the author recently released the ebooks)
Publication date: First published, 2000. Ebook was made available in 2011
Paperback: 355 pages 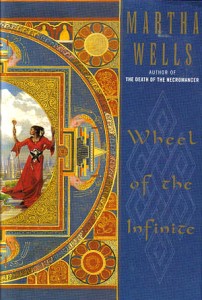 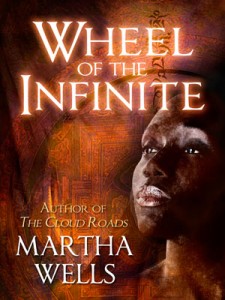 Every year, the Wheel of the Infinite must be painstakingly remade to ensure peace and harmony. And every hundred years, the Wheel and the world become one. But now a black storm ravages the beautiful mandala, and a woman with a shadowy past — an exile, murderer, and traitor — has been summoned back to put the world right. For if Maskelle and the swordsman Rian cannot stop the Wheel’s accelerating disintegration — then all that is what and will be…will end.

Why did I read this book: I became a huge fan of Martha Wells’Books of the Raksura series recently (The Cloud Roads and The Serpent Sea) and decided I wanted to read more of her backlist.

I’ve recently read (and loved) Martha Wells’ most recent books, The Cloud Roads (one of my top 10 of 2011) and The Serpent Sea. Ever since then I’ve been meaning to read some of her backlist titles. I decided to go with Wheel of the Infinite because it was recently re-released with a new cover. And I am so glad I did because OH MY WORD, this book was a thing of beauty.

Every year, the Voices of the Ancestors gather to renew the Wheel of the Infinite, a sand mandala that represents the world and shapes reality. Except this year something goes terribly wrong as the Wheel shows a darkness growing and the Celestial One summons Maskele, our main character, to help out. She used to be the Voice of the Adversary – the only Ancestor that was never human and who is the embodiment of justice, bound to destroy evil – but a few years ago she was exiled for murder and treason. Maskele travels back to the heart of the Celestial Empire in the company of her new lover, a swordsman called Rian and together, they must discover who is behind the Wheel’s disintegration, before it is too late.

At its heart, the plot of Wheel of the Infinite could perhaps be described as a Mystery as Maskele and Rian set out to investigate what in the world has happened to the Wheel, who is causing it, and why. They are running against time as the world – as they know it – can be reshaped and reformed by the Wheel. What sets this book apart is the fact this story takes place in one of the most beautifully realised Fantasy settings I’ve ever had the pleasure to read about. In fact, given that the last example of a brilliantly done Fantasy setting was Martha Wells’ own aforementioned Books of the Raksura, it is easy to assume that this author has definitely a way with creating extremely inventive, vivid, interesting secondary worlds. The use of sand mandalas might have been inspired by Eastern philosophies and religions (like Buddhism) but the concepts, the ideas, the whole structure of this world – including its religion and politics – is wholly innovative. I loved the idea of the Wheel as being inherent to forming reality as much as I loved the fact that this is a precarious reality in itself, able to be changed depending on those who could wield that power. Although I would have liked to see a bit more of the possible dangers of having only a group of individuals being able to see (and therefore affect) the Wheel, this was not in any way a deterrent for how good this book turned out to be.

I also loved that there was a dash of humour with a side of romance and adventure to the proceedings, not to mention that the whole cast of characters was awesome. The narrative alternates between Maskele and Rian’s point of view but despite that, Maskele is truly the main character here. Although I loved Rian and his story, his past, his competence as a warrior and above all, his dedication to Maskele, it is the latter that made me love this book wholeheartedly.

She is not only a PoC protagonist (amongst an entire plethora of PoC characters in a PoC world) but also an older heroine at over 45 years old AND three previous marriages (none ended well, oops). But this is just the start: I absolutely adored her arc with the heartfelt regret at the actions that led to her exile and all second-guessing that ensued; she was capable and powerful with the ability to kill mercilessly – all of which are also aspects of the Adversary (but where does the Adversary ends and where does the Voice start?). I also loved that it was a struggle NOT to kill because of a vow not to use her powers anymore. As it was a struggle to believe in herself again after her failure so many years ago.

I loved how well balanced and mutually respectful her relationship with Rian was and how their bond developed from initial attraction to something deeper in a very subtle but satisfying way, a lot of it based on mutual respect. Plus how much did I love the fact that Rian is a good 15 years younger and this is not even remotely an issue? A LOT.

And of course, there is the Adversary itself – the only one of the Ancestors who was never human to begin with. It has always been indentified and personified by its Voice (the most recent one being Maskelle) and I appreciated how the story addressed this from both the Voice’s perspective but also from the Adversary’s own.

As you probably have noticed by now, this review is basically a love-fest. Wheel of the Infinite is a tightly woven story driven by plot AND characters beautifully. It’s more than settled now: Martha Wells has just become a favourite author. Highly recommended.

Maskelle had been asking the Ancestors to stop the rain three days running now and as usual, they weren’t listening.

She stood on a little hill, surrounded by the heavy jungle that lined either side of the river of mud that had once been the road, and watched the wagons crawl painfully by. They were wooden and brightly painted but the roofs hadn’t been tarred in too long and she knew it was hardly any drier inside them than out. One of the oxen, straining to keep the wheels moving forward against the tide of mud, moaned loudly. I sympathize, Maskelle thought.

Rastim, leader of the little troupe, stumbled up the hill toward her, his boots squelching and his clothes a sodden mess. He paused a short distance from her and said, “O Great Protectress, why is it we’re going to Duvalpore?”

Maskelle leaned on her staff. “Because I said so.”

“Oh.” Rastim contemplated the wagons thoughtfully, then looked down at his shirt where the downpour was making the cheap dyes of the embroidery run, and sighed heavily.

Maskelle would have promised him better, if she made promises.

He glanced at her, brows lifted. “So, there’s no chance of just stopping and drowning here, say?”

“No, I think we’ll keep moving for now and drown a little further up the road.”

“Ah.” He nodded. “Then can you come and take another look at Killia’s poppet? She thinks she’s worse.”

Maskelle rolled her eyes to the Ancestors. Rastim was an Ariaden and they never believed in giving bad news without a lot of preamble, no matter how urgent it was. She started down the hill and plunged back into the mud river.

Killia’s wagon was painted with geometric designs in bright red and yellow, now splattered with dirt from the long journey. Maskelle caught the handhold at the back and stepped up onto the running board, which barely cleared the soupy mud. She knocked on the shutter and it was immediately cranked upward. Killia extended a hand to help her in and Maskelle discovered she needed it, her light cotton robes were so drenched that they added an unexpected amount to her weight. She sat on the bench just inside the entrance so she could wring them out a bit and wait for her eyes to adjust to the dark interior.

Various wooden bowls caught the leaks from the roof, but there were still puddles on the lacquered floor. Overhead, cooking pots banged into empty cage lamps and the bags that held costumes and drapes for the scenery, bundled up to keep them out of the water. Killia’s daughter was huddled in one of the two narrow bunks under a mound of damp blankets. Maskelle leaned over and burrowed in the blankets until she touched warm skin. Too warm. She swore under her breath.

“Bad?” Killia asked. She was a tiny woman with the pale skin of the Ariaden and long dark hair caught back by a number of clips and ribbons. Her face had the perfection of a porcelain doll’s and to Maskelle she looked hardly more than a child herself, but her eyes were old.

Maskelle shook her head. The priesthood took oaths to the truth, but she had broken all her oaths long ago and Killia had enough to worry about. “I’ll have to go down to the river for some more ivibrae — the real river, not the one under the wagon.”

“Ivibrae is good for any fever, not just lung rot. The girl doesn’t have lung rot,” Maskelle told her, and thought, Not yet, anyway.

Killia didn’t look reassured. Maskelle gathered her sodden robes and jumped down off the wagon bed.

Rastim had been walking behind it and the spray of mud as she landed splattered both of them. They eyed each other in mutual understanding; it had been one of those days. She said, “Camp in the Sare if you can make it before dark. If you’re not there, I’ll look for you along the road.”

He swept her a theatrical bow. “Yes, O Great Protectress.”

“You’re welcome, Rastim,” Maskelle said, and splashed toward the heavy dark wall of the jungle.

Reading next: Changeling by Delia Sherman