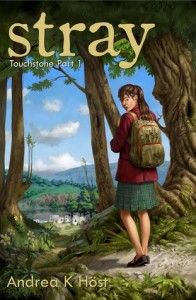 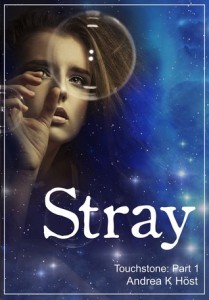 On her last day of high school, Cassandra Devlin walked out of exams and into a forest. Surrounded by the wrong sort of trees, and animals never featured in any nature documentary, Cass is only sure of one thing; alone, she will be lucky to survive.

The sprawl of abandoned blockish buildings Cass discovers offers her only more puzzles. Where are the people? What is the intoxicating mist which drifts off the buildings in the moonlight? And why does she feel like she’s being watched?

Increasingly unnerved, Cass is overjoyed at the arrival of the formidable Setari. Whisked to a world as technologically advanced as the first was primitive, where nanotech computers are grown inside people’s skulls, and few have any interest in venturing outside the enormous whitestone cities, Cass finds herself processed as a ‘stray’, a refugee displaced by the gates torn between worlds. Struggling with an unfamiliar language and culture, she must adapt to virtual classrooms, friends who can teleport, and the ingrained attitude that strays are backward and slow.

Can Cass ever find her way home? And after the people of her new world discover her unexpected value, will they be willing to let her leave?

Stand alone or series: First in the Touchstone trilogy

Why did I read this book: Because I absolutely loved the author’s And All The Stars which ended up as one of my top 10 of 2012. Plus, many of our blogging buddies have loved and highly recommended the Touchstone Trilogy.

I walked into adventure and adventure has given me blisters.

On the last day of high school, Cassandra Devlin walks away from her exams and just like that, stumbles into another world. She is only sure of two things: this is not Earth and that she must do everything to survive. She eventually finds an abandoned city where she plans to settle down for the time being.

Then one day she wakes up to find herself staring at two people who definitely look human but who don’t speak any recognisable language. They whisk her away to a world technologically advanced, where nanotechnology abounds and computers are inserted inside people’s heads. Now with an inbuilt dictionary that allows her to at least understand those around her, Cass comes to know that she has crossed one of the many gates between worlds and is branded one of the many “strays” lost between worlds.

As she spends more time with the Setari – the equivalent to an army that defend this world from attacks – and learns more about not only their special gifts but her own surprising effect on them, she understands that finding a way home might be within her grasp. If only she can make sure that 1) they will let her go and 2) going home doesn’t mean putting Earth in danger.

Stray , the first book in the Touchstone trilogy, is a Science Fiction story of a displaced teenager. Written in epistolary format, it chronicles Cassandra’s adventures as she writer in the notebook she had been carrying in her backpack when she crosses over. Writing is I believe, what keeps her going, giving her footing, allowing her to express her thoughts and feelings in her own language- this is fundamental to the story and to her mental health once she discovers that having a computer implanted in her brain means that anybody can assess her at any time.

The first few entries essentially tell a survivalist story: following Cass as she get to grips with where she is, attempting to understand what could have happened to her and trying to find food, water and shelter. It’s a really clever narrative too, effectively depicting both the sense of wonder and fear that Cass feels as well as her impressive surviving skills which stem from very clever decisions based on common sense.

The latter entries chronicle her days with the Setari, the attempts to understand one another including the necessity to learn their language and the intense physical training she undergoes. It’s awesome that her internal dictionary doesn’t automatically mean that she can speak the language which means she spends most of the story going back to basic schooling – frustrating as it is since back home, she had just graduated.

All of this punctuated by the fact that Cassandra is in reality a lab rat for these people – despite the fact that she does indeed creates several bonds among them (and when she does, so does the reader).

The question is: are any of those, real bonds at all or born out necessity from both sides? Because one of the more interesting aspects of Stray is the question of narrative reliability: Cassandra’s loneliness, her sense of displacement leap from the pages and even when she does not say these things outright those are very real in the manner that she connects with characters. She sees one of the main female characters almost like a mother figure, for example, which is speaks to how much she misses her family. But her usefulness to the Setari is very real as well and the fact that there is such a high level of control over people’s lives does put forth the question of how much of the decisions she makes are real decisions at all?

Those are incredibly engaging, thought-provoking aspects of the story and even the inevitable lull in the narrative when things settle down in the middle of the story offers some interesting observations about Cass and the new life she is living.

Finally, I believe that the success of Stray depends entirely on how much a reader will connect (or not) with Cass’ voice and character because so much of the story depends on that. I loved Cass: her no frills attitude, her self-reliance at the same time that she acknowledges the importance of help from others and her extremely observant – and often funny – viewpoint.

This is yet another incredibly strong story from Andrea K. Höst, and I can’t wait to pick up the next entries in the trilogy.

I was walking home from school. I turned a corner, and I was here. No flashing lights, no warning, no blackout, no zoomy wormhole, nothing but me one minute in Sydney and the next here.

Here is…here is the problem. It’s definitely not Sydney. I don’t think it’s Australia, either, unless it’s Tasmania. But I’m sure they’d have gum trees in Tasmania, and that’s the thing. The trees are all wrong. I’m out in the country, but the wrong country. Hills covered in trees, too many to describe but none of them remotely like Eucalypt. The birds sound wrong too.My mobile isn’t getting any signal. I can’t see any buildings or power lines. No planes have flown over. I haven’t been able to see anything at any distance, so I’m trying to at least get out of these trees, or to a lookout. I’ve been walking for maybe half an hour. My watch says it’s 3.30 but the sky thinks it’s later. I’ve found a thread of a track between all the trees and bushes and I’m going to follow it.

Reading Next: The Catalogue of the Universe by Margaret Mahy