Title: Renegade Magic (US) / A Tangle of Magicks (UK) 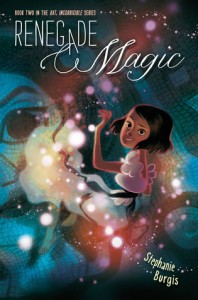 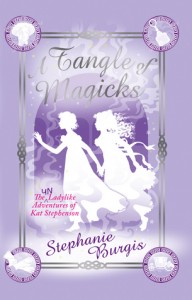 Is Kat’s untrained magic strong enough to prove she has what it takes to be a true Guardian? Find out in this second book of Stephanie Burgis’s Regency-era fantasy trilogy. Nowhere in England is safe from the mischief and magic of Kat Stephenson.

With her eldest sister finally married, it seems things are settling down for Kat. But when a scandalous accusation threatens her second sister Angeline’s prospects, Stepmama swiftly whisks the family away to Bath in an attempt to outrun the gossip and engage Angeline to a respectable suitor. Meanwhile, Kat’s utter lack of ladylike propriety has prompted the powerful Lord Ravenscroft to expel her from the Order of Guardians before her training has even begun!

Anger and exile aside, Kat knows something is not quite right about Lord Ravenscroft. And when her foolish brother Charles unwittingly invokes the furious force of Sulis Minerva at the King’s and Queen’s Baths, endangering vulnerable cousin Lucy and himself in the process, it’s up to Kat to rescue her family, find Angeline a proper husband, and prove she has the true dignity of a Guardian.

Stand alone or series: The second book in the Unladylike Adventures of Kat Stephenson series

How did I get this book: ARC from the Author

Why did I read this book: I absolutely adored the first book in this series, Kat, Incorrigible, and could not wait to begin reading Renegade Magic for more of the wonderful Kat Stephenson.

It was a truth universally acknowledged that my brother Charles was a hopeless gamester, a ridiculous over-sleeper and the one sibling too lazy to take part in any family arguments, no matter how exasperating our sisters might have been (and usually were).

Kat Stephenson, untrained Guardian and youngest member of the Stephenson family, has saved the day, and now must deal with the consequences. Thanks to her efforts, Kat’s eldest sister Elissa is marrying the man of her dreams (and newly found substantial fortune, also thanks to Kat), Mr. Collingwood. Her brother Charles’ sizable gambling debts are repaid, Angeline and Kat are restored with modest dowries, and all seems to be looking up for the Stephenson family. On the day of the wedding though, things go terribly awry when the ceremony is rudely interrupted by one Mrs. Carlyle – mother to the (formerly bewitched) Frederick Carlyle, come to rescue her son from the scandalous, ruinous clutches of Angeline Stephenson. After receiving a vindictive letter from high-society darling, Lady Fotherington, Angeline’s prospects seem ruined as she is revealed publicly as a witch – her true love, Frederick, is taken away by his enraged mama, his inheritance threatened to be withheld should he choose to dabble with the likes of the Stephensons. Even worse, after learning this news, Kat confronts fellow Guardian, Lady Fotherington (whom has always had it in for Kat and her family, stemming from some past brawl with Kat’s mother) – and promptly gets herself thrown out of the Guardians’ order, much to the glee of Fotherington.

In order to salvage the family’s reputation before the gossip of witchcraft can reach the rest of society, Kat’s Stepmama whisks away the family (sans newlywed Elissa) to Bath, under the guise of paying a visit to their Stepmama’s very rich and well connected cousins and enjoy the locale’s health restoring properties. In reality, Kat’s Stepmother’s plan is simple and direct – they are at Bath to find Angeline a husband before Lady Fotherington’s malicious handiwork catches up to them.

Things at Bath, however, do not go smoothly to plan. First, there’s the problem of tricking Stepmama’s rich cousins into accepting the Stephensons as guests (thanks to Kat’s quick thinking and storytelling). There’s the problem of saving Angeline from her own ridiculous schemes to push everyone away. Most importantly, there’s the question of the restorative springs at Bath themselves – wild magic is afoot, and it involves Kat’s brother Charles, her cousin Lucy, and the Guardians themselves. With Kat expelled from the order, though, she has to rely on only her own wits to solve the mystery and save the day.

Well, folks, what can I say? Renegade Magic is every bit as fantastic as Kat, Incorrigible – heck, it’s even better. Everything that I loved about the first book and came to expect from the second book – Kat’s penchant for mischief-making and magic-wielding, the love and understandable frustrations between Kat and her family, for two – are present in abundance here. The ante is upped in Renegade Magic, in terms of plot complications (they are wonderful), character development (especially between Kat and her various family members), and in terms of Kat’s abilities herself.

Let’s talk plot, first. The storyline for Renegade Magic is more complex than the first book, throwing in not only romantic entanglements and magical mischief, but also some serious conflict in the way of Kat getting kicked out of the Guardians’ order, being stripped of access to the Golden Hall, and her powers forever destined to be stunted as she will never have formal training by any Guardian mentor. Things get even more drastic when Kat stumbles across some dangerous wild magic in the bath houses, ancient Roman rituals amassing crazy amounts of power, and must figure out who is behind the gatherings before her brother Charles ends up a sacrificial lamb to someone else’s dastardly scheme. There’s also the ever-present tension between Kat and Angeline, as Angeline is hell bent on her ridiculous schemes to make her Stepmama go apoplectic, and stick it to society at the same time.

In fact, I think my favorite parts of Renegade Magic involve Kat and Angeline and their relationship. As with the first book, clearly both sisters love each other (and by way of comparison, Kat and Angeline’s cousins, Maria and Lucy are a great example of nasty sisters), though they do have their own tensions and animosity. Angeline still refuses to share their mother’s spell books with Kat, and clearly harbors resentment towards her younger sister for inheriting Guardian powers and a position in the secret order of society magicians. At the same time, Kat jumps into trouble head-first, even with the best of intentions (protecting her sister and brother, for example) without thinking of consequences. There’s also more inclusion of Kat’s Stepmama – giving her more of a voice and full dimension as a character that does love her stepchildren, for all her blustering – which is fantastic. Plus, this time around, we are fully introduced to brother Charles (who needs more conviction, but actually does stand up for his sisters), and best of all, Kat’s father – who finally takes a stand for his family in a gloriously fist-pump-of-awesomeness pivotal moment.

Of course, the success of the book relies on Kat herself, and she’s stronger than ever in Renegade Magic. Just as clever, just as quick-witted, and just as wonderfully headstrong, Kat is a heroine with her heart in the right place, who will do anything for those she cares about. And that is pretty freaking awesome.

I loved this book to bits, and I cannot wait for more. Absolutely, enthusiastically recommended, and easily a notable read of 2012.

It was a truth universally acknowledged that my brother Charles was a hopeless gamester, a ridiculous over-sleeper and the one sibling too lazy to take part in any family arguments, no matter how exasperating our sisters might have been (and usually were).

But he had one shining virtue as an older brother: he was infinitely persuadable.

“You do know, Kat,” he whispered, “Stepmama will murder you for this if she finds out.”

He was yawning so hard that most people wouldn’t have been able to decipher his words, but I had long experience. Ever since Charles had been sent home from Oxford in disgrace, he’d resorted to sleep as his safest escape from family obligations. Even as he yawned and complained, though, he was obediently following me down the creaking wooden stairs to the ground floor of our family’s vicarage.

It was simply too much trouble for Charles to hold out against anyone who didn’t give up the first time he said “no”. And I – as all three of my siblings could testify – was definitely stubborn enough for the task.

It was still dark outside and the candle in my hand was the only light in the stairwell. I held it up high for Charles’s sake and carefully stepped over the spots on the stairs where the ancient wood was beginning to rot.

“Stepmama won’t murder me,” I whispered back, “because she won’t find out. Anyway, she’ll be too busy preparing for the wedding to bother with either of us when she wakes up.”

“Huh.” As usual, he didn’t bother to pursue the argument… which was just as well, since nothing could have changed my mind.

In three hours, my oldest sister was going to be married. In four hours – five at the most, if the wedding breakfast took longer than expected – Elissa would be gone, and all our lives would change forever. Even when she came back for visits, from now on, she would always bring her husband with her – and as much as I liked her sweettempered fiancé, Mr Collingwood, it could never be the same. They would be sharing a bedroom, for one thing. That meant I wouldn’t be free to slip into Elissa’s room any time in the day or night to get comfort or advice or help against Stepmama… or even just to let Elissa fuss over me, the way she had ever since I had been born and our mother had died, leaving my two older sisters to raise me.

For all that I’d complained over the years about Elissa’s prissiness and high-handedness, her lectures on propriety, and the fact that she never seemed to realise I was twelve years old and not a baby anymore… well, somehow, none of that seemed to matter now.