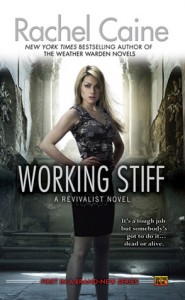 Bryn Davis was killed on the job after discovering her bosses were selling a drug designed to resurrect the dead. Now, revived by that same drug, she becomes an undead soldier in a corporate war to take down the very pharmaceutical company responsible for her new condition…

Stand alone or series: The first book in the brand new Revivalist series

Why did I read this book: I absolutely adore Rachel Caine. This author writes the equivalent of Thea-crack. Her Weather Warden series (rest in peace, dear Jo and David and Lewis!) is one of my favorite Urban Fantasy series’ of all time, and her Outcast Season books are equally fantastic. When I learned that the lovely and talented Ms. Caine would be writing a brand new UF series – with a certain new type of zombie – I think I actually started to salivate.

For twenty-six year old army veteran Bryn Davis, the first day at a new job in a new career is a frightening but exciting prospect. Armed with the best outfit she can afford and a box of freshly minted business cards, Bryn starts her first day as Funeral Director at Fairview Mortuary with the aim to impress her new boss, Mr. Fairview, with her personability and professionalism. Unfortunately for Bryn, things quickly go from bad to worse when one of her first consultations ends with a grieving teenage daughter killing herself in the mortuary bathroom. Then, after the mess is cleaned up and reports are filed with the police, Bryn finds herself in the middle of a holdup when another of her consultation clients for the day returns with a gun. To add to that misery, Bryn ends up inadvertently stumbling across Fairview’s dirty, if lucrative, side business: drugs. Not just any drug, but a black market designer serum called Returné – which can bring the recently dead back to life, and keep them young, alive, and virtually invincible so long as they keep receiving regular daily doses.

Naturally, Fairview is not pleased with Bryn’s meddling and her hell of a first day comes to an even worse end: Bryn is murdered in cold blood.

Of course, what kind of book would Working Stiff be if our intrepid heroine died and never returned after the first couple of chapters? In short measure Bryn finds herself born again, revived by the very drug whose discovery led to her own death. Brought back to life by a pair of suits, Bryn finds herself automatically enrolled in pharmaceutical juggernaut Pharmadene’s ultimate employee loyalty program – she’s informed by her new cohorts Joe Fideli and Patrick McCallister that she represents an investment for the company, and one that’s expected to pay out very soon. In return for daily doses of Returné – the only thing keeping Bryne from decomposing and dying a slow, painful death – Bryn has to take over her old boss’s black market business to help the company find Fairview’s old supplier. Things are never as simple or straightforward as they seem, especially with a drug with as much potential for power as Returné, and soon Bryn finds herself mired in a corporate espionage plot with terrible, far-ranging consequences.

There are a few things I have come to expect from every new book from Rachel Caine, namely awesome worldbuilding, a tightly written plot rife with high-stakes action, and a strong and wholly winsome heroine. I am thrilled to report that true to form, all of these elements are present in Working Stiff, resulting in one hell of a first novel in what looks to be a new must-buy Urban Fantasy series. From a worldbuilding and plotting perspective, Working Stiff completely rocks. The story itself is as high-action and high-stakes as the Weather Warden books, though on a much more secretive and corporate level. There are twists and turns, and a significant amount of uncertainty when it comes to characters that Bryn can trust, and all these elements are handled effortlessly by Ms. Caine.

Premise-wise, I loved the concept of Returné and the lengths that a company like Pharmadene would go to in order to keep it proprietary, even to the point where the company would kill its own employees only to revive them (it’s on hell of a way to guarantee employee loyalty, and also brings a fun double meaning to the notion of “corporate zombie” – or the titular “working stiff”). And it’s not just the concept of a drug that can bring someone back from the dead that impressed me, but the idea that Returné is something that needs to be taken on a daily basis in order for the revived to continue living. With this unique little twist thrown in the mix, there’s a very real and present danger over Bryn’s head from the onset of the book as she needs the drug every day, without fail, in order to stop decomposition. Hell, she can’t even really DIE thanks to the serum (even a shot to the head or the shattering of all her bones wouldn’t stop the nanites in the injection from repairing her body). Short of complete dismemberment, Bryn is basically invincible so long as she gets her shots on time – but this also means that without a constant source of Returné, she’s going to survive and be conscious for her body falling apart around her. Needless to say, it’s a terrifying thought for Bryn, and it makes her decisions about what is almost certainly a short future lifespan even more important.

From a character perspective, Bryn is everything anyone could ask for in a series heroine. Smart, earnest, and capable of making the tough moral decisions when she has to, Bryn is a new kind of badass (and, if you’re a Caine fan like myself, thankfully remarkably different from Jo Baldwin or Cassiel). Even though Bryn has been in the army and is trained in weaponry and hand-to-hand combat, she’s not some automatic killer/ninja badass, which immediately sets her apart from the slew of Urban Fantasy heroines on the market. No, Bryn has no special abilities or superpowers beyond the ability to painfully heal after being beaten or shot, granted to her by the nanites in her bloodstream. She needs help, she gets into a lot of trouble, but Bryn also steps up when she needs to. In this reader’s humble opinion, Bryn is an incredibly real, believable young woman, and a heroine worth rooting for.

Beyond Bryn, there’s also a bevy of secondary characters that are also fully developed and wonderfully realized. Patrick, the love interest, is a strong hero with ambiguous loyalties and a shady past that is revealed gradually throughout the book – complete with a good amount of sexual tension (this is UF after all). Joe, Bryn’s other cohort, is hired muscle but a surprisingly caring family man with more going on beneath the surface. And that’s just the tip of the iceberg as there are secret allies, sadistic and power-crazed villains, corporate zombies and double-agents all thrown into the mix.

In short, I loved this book – Working Stiff is an awesome start to a fantastic new series. Rachel Caine has done it again, and I cannot wait for next August.

Bryn’s first embalming instructor had told her, straight up, that two kinds of people entered the death business: freaks and true believers. Bryn Davis didn’t think she was either one of those. For her, it was a prime career opportunity — a genuine profession.

Oh, she’d picked up odd paychecks during college as an office temp, dog-walker, and one memorable afternoon at a chicken factory, but none of those had ever felt real to her. Joining the Army after college had seemed like a good idea at the time (steady job, good wages), but four years in Iraq hadn’t made her want be a career solider; it had, though, given her a bedrock understanding of the fragility of human life. After that, dead bodies didn’t scare or disgust her.

One good thing she could say for her time in the military: it had led her where she was now, to this job… a good, stable one, and even better, an important one.

Bryn smiled a little at the thought. Maybe she was a true believer, after all.

Rating: 8 – Fantastic, and definitely on my notable – if not favorite – reads of the year.

Courtesy of the publisher, we have ONE copy of Working Stiff up for grabs! The contest is open to residents of the US only and will run until Saturday, July 30 at 11:59 PM (PST). In order to enter, leave a comment here letting us know who YOUR favorite urban fantasy heroine is. Only one entry per person, please! Multiple comments will be disqualified. Good luck!