“Everywhere you go, pain and misery seem to follow. Well, I’m done following along with it. I won’t be a part of your violence anymore. And I won’t let the children be infected by it either.” 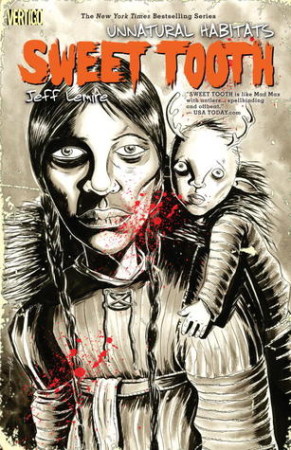 As the mysterious Captain James Thacker and his crew man a deadly expedition, they will uncover secrets centuries old, but what does any of this have to do with Gus and Jepperd? Plus, while Jeppard, Singh and Gus make plans to head to Alaska, things start to deteriorate for the rest of the group back at the sanctuary!

In Volume 3: Jepperd has teamed up with Lucy and Becky (two women previously met at the brothel, one of which Jepperd knew from the Preserve), and has made a deal with hybrid-obsessed cultists to take the Preserve down. Jepperd is successful in his mission, freeing Gus and his fellow captives – but also learns too late that his son, Buddy, was born alive and has been a captive for all these years. Jepperd leaves with Gus, Bobby, Wendy, Becky, Lucy, Dr. Singh and Johnny – thinking that Buddy has been torn apart and died. Together, Gus, Jeppard and their motley crew make their way north to Alaska – where the key to the plague, and Gus’s mysterious origins, may lay in wait.

In Volume 4: Jepperd, Gus, Lucy, Becky, Wendy, Bobby, Dr. Singh, and Johnny are all together – for now – and make their gradual way north towards Alaska. Along the way, the team finds happiness and a respite in the snow, and readers learn more about Becky, Lucy and Wendy’s past in the aftermath of the pandemic. Meanwhile, Gus is still distrusting of Jepperd and his intentions – but a bear attack prompts Jepperd’s loyalty to his “sweet tooth” to be shown in full force. When the group encounters a self-sustaining compound called “Project Evergreen”, manned by a single person named Walter Fish, they face a difficult choice. Do they stay in this seemingly happy, stable home? Or do they continue northward to chase after Gus’s past?

Jepperd is mistrusting of Walter and decides to strike out north, but Lucy – now afflicted with the plague that comes for all humans eventually – stands against him to stay at Project Evergreen. Dr. Singh is on Jepperd’s side, though, and once Gus is strong enough to travel (recovering from his nearly fatal gunshot wound), he promises Jepperd that they will head north.

In this fifth and penultimate volume of Sweet Tooth, the end game is near – and, unlike other volumes in this series, Unnatural Habitats starts off by telling a very different kind of story. The book is broken into two halves: the first story is the posthumous journal entries of a 1911 gentleman in search of his future brother in law; the second resumes the tale of Gus and Jepperd as they face mounting peril. The two stories are further differentiated in art and format, as the first story is illustrated by guest artist Matt Kindt, while the second story continues with Lemire’s visceral style.

The first part of this story deals with a completely new character: 1911 physician-in-training, James Thacker. James’s story unfolds in epistolary format, as the young man heads northward in search of his classmate and his sister’s fiancee, Louis Simpson. Much to his sister’s frustration and pain, Louis decided to put his marriage on hold in order to travel to Alaska, joining a missionary group to civilize the heathen natives there. It has been months since Louis’s last missive, however, and now James follows his future brother’s path in the hopes of rescuing him from a grizzly fate – or at the very least, finding out what grizzly fate has befallen him.

When James and his men reach Alaska, they find death, legend, and more questions. Louis and the missionary ship is on land, but abandoned; they find a church full of dead and plague-ridden bodies, and then their own dogs are killed in the night by forces unknown.

When James and the crew find the natives and discover the truth of Louis’s fate, things get downright weird. There’s the great legend of Tekkeitsertok – a name now familiar from the scribblings of Gus’s father in his “bible” – which turns out not to be the “white demon”, but an Inuit mythological figure born into the flesh.

The source of the plague – the same plague that would wipe out the rest of humanity nearly a century later – is discovered through James Thacker’s words.

The result and overall effect of this three issue arc?

It’s mixed. Any time there’s a huge break from the meat of a story – especially as the story nears the end game – is initially frustrating. Starting Unnatural Habitats and learning that not one, not two, but three issues are dedicated solely to this seemingly unrelated backstory? That’s frustrating. (Especially because this story takes over each issue in its entirety; we’re not talking about the substory that comes at the end of a comic book here.)

But this other storyline is in here for a reason. And it’s a pretty good reason. Through James’s journal entries, we see a familiar horror unfolding and learn more about the possible cause of the end of the world. I actually became invested in this particular storyline – as horribly colonialist and small minded as James Thacker and Louis Simpson may be – because of Lemire’s crafty storytelling. Guest artist Kindt is markedly different than Lemire’s illustrative style – softer, less concerned with sharp lines and hard shadows – and it effectively creates an otherworldliness that mimics some of the cues and visuals of the main Sweet Tooth storyline. In particular, I like the bespectacled James and his Message from God scene – which is eerily reminiscent of Abbot (an appropriately religious name) so many years later.

There’s something very Tales of the Black Freighter about Thacker’s substory – a cursed crew, a proud man brought low, the inevitable aftermath of colonial racism, and hate, and pigheaded righteous rage. It’s a plot-within-a-plot that mimics the storyline at large, and I’m a sucker for this sort of thing.

On the Negative Side…

The explanation for the origin of the plague – which is completely filtered through James Thacker’s early twentieth century, entitled, non-scientific perspective – is kind of a let down. That said, it is being filtered through one very privileged and not-so-smart character’s perspective, so I have hope that the ultimate cause of the end of the world has less to do with the hubris of a white man impregnating an Inuit woman and getting a Tekkeitsertok child in the flesh… and more to do with other factors.

But, I suppose I’ll find out soon enough.

Meanwhile, Back at Project Evergreen

The group is fractured yet again. Dr. Singh and Gus leave the compound in order to seek out Jepperd (who has been going it alone outside the walls for weeks now). Together, the trio decides to head northward to Alaska to complete what they set out to do…

Except that on the way, they run into the real survivors of Project Evergreen, and learn that “Walter Fish” – or the man claiming to be him – is not at all who he seems. Before continuing north, Jepperd decides that he cannot leave Luce, Becky, Wendy, Buddy, and Johnny behind, so he sets off for the compound once again to save the day with his fists and penchant for violence.

This is actually a fantastic turning point for Jepperd – he’s kinda reminiscent of bruisers like Marv from Sin City (or any other number of badasses who have lost everything… but now have something to fight for and live for). That’s a kind of tired storyline, though, right? Which brings me to…

The Cool Part of All This

The Walter Fish storyline is painfully transparent – you know he’s not who he says he is from the first introduction to the character in Vol. 4 – and his ultimate goals (abuse and murderer of women and children) are horrible, but familiar.

The cool part in all of this is the fact that Becky, Johnny, Buddy, Lucy, Wendy, and Gus figure out how to save themselves. In particular, Becky stands up for herself and her friends, not relying solely on Lucy to save her skin again. Gus believes in himself and his friends. Together, they stand against Walter Fish… and they do it alone because Jepperd isn’t there.

On his way to Project Evergreen, driving like a bat out of hell, Jepperd gets in trouble and is held up. While he and an equally tough loner size each other up and communicate with grunts and threats of violence, Gus makes his way back to the compound and with the others mounts an offensive that results in the breaking of Walter Fish.

And that is freaking awesome.

Jepperd meeting Jimmy Jacobs – a hockey rival from the past – is awesome. The fact that these two bruisers – once they realize how they know each other – decide to team up, strap on some skates, and speed skate their way to bring some pain down on Walter Fish is fucking amazing.

The fact that they don’t get to do any beating up? That’s even more amazing.

(And I’m sure there’s plenty of time for the post-apocalyptic comic book version of the Bash Brothers in Vol. 6, right?)

Is Sweet Tooth going down the religious parable/mythological route, over the scientific, genetic experimentation road?

It seems like it. I’m not quite sure how to feel about that. So…I’ll reserve judgment until the sixth and final volume on Friday.

Book Review: I Am Not A Serial Killer by Dan Wells

What She Said: Jasmyn & The Demon’s Lexicon