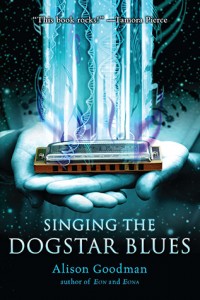 Seventeen-year-old Joss is a rebel, and a student of time travel at the prestigious Centre for Neo-Historical Studies. This year, for the first time, the Centre has an alien student: Mavkel, from the planet Choria. And Mavkel has chosen Joss, of all people, as his roommate and study partner. Then Mavkel gets sick. Joss quickly realizes that his will to live is draining away. The only way she can help Mavkel is by breaking the Centre’s strictest rules—and that means going back in time to change history.

Why did we read this book: Thea is a huge fan of Alison Goodman’s recent fantasy novels Eon and Eona, and when we both happened across this repackaged first novel while on a break from BEA madness, we both immediately jumped on it.

Joss Aaronson is a misfit and a maverick, and thanks to her famous reporter mother, Joss has been shipped off to more boarding schools than she can count. Now, on the eve of her eighteenth birthday, Joss is finally part of something that is passionate about. A first-year in the prestigious Centre for Neo-Historical Studies, and one of a very select few that will train to travel back in time, Joss is about to embark on an academic journey to study and observe first-hand the birth of soul music and its finest musicians and moments throughout history.

The last thing that Joss – already branded a troublemaker that has caught the eye of the Center’s surly Director – needs is to be paired up with a high-profile alien teammate. But paired up with a high-profile alien Joss is, when Mavkel, the first Chorian student admitted to the Center, chooses her for his time-jumping partner. Joss doesn’t mind Mav (though its double features, retractable ears, and strange speaking and eating habits are…well, distracting), but she does mind all the extra attention that comes with him. Death threats, increased security, 24-hour surveillance – for Joss, all of this attention is a nightmare. Plus, Mav keeps insisting that Joss has some kind of mental/telepathic resonance, and when he falls ill, it is up to Joss to figure out just what lengths she will take to save her new friend. Even if it means traveling back in time.

Singing the Dogstar Blues is Alison Goodman’s debut novel, rereleased this year (presumably based on the awesome success of Eon and Eona). I have heard nothing but good things about Dogstar Blues and was thrilled to see this new shiny repackaging of the book – having been a fan of Goodman’s fantasy, I could not wait to try her science fiction.

And you know what? I quite enjoyed Joss and Mavkel. Singing the Dogstar Blues is an undeniably fun novel. Joss is a little prickly and predictable as a surly rich kid heroine, but her genuine hurt and feelings for her mother, for a lost maternal figure in her life, and for Mav are very nicely done. While Joss’s voice is the driving force behind the book, Mav is the TRUE standout character. I freaking love this weird, sad alien. The Chorians overall – asexual, telepathic, with sing-song way of vocalizing and healing – are an intriguing bunch. The most intriguing aspect of these aliens, and Mavkel most of all, is their deep-seeded need to be a part of a pair and to know their lineage. Every Chorian is born and forms a bond with another (not romantic, mind you), and the two are interlinked for the rest of their lives – when one dies, the other soon follows. In Mav’s case, his bondmate died and he is seen as a “freak” to his people – saved by the great doctors and healers of his planet, Mav may be alive but he is utterly, devastatingly alone. When Mav finds Joss, and feels an echo of a bond with her, he is overjoyed – but his hope is a fragile thing that is tested sorely in this book.

Other than this fascinating dynamic and characterization, Singing the Dogstar Blues is just plain fun. There isn’t really much in terms of depth to the story, and I was actually quite surprised to see how little actual science or time travel is in this novel. The actual storyline, the mystery behind Joss’s past, is fairly predictable – but the writing is sure-footed and the plot zips along at a comfortable and engaging pace.

All in all, I truly enjoyed The Dogstar Blues. It’s no Eon/Eona, but it’s fun and certainly worth a read, especially if you’re looking to change up your beach or poolside staples with some super soft scifi.

I had never heard of Singing the Dogstar Blues but when we came across it and we saw the words “partners in time crime” we jumped on it so fast you wouldn’t believe. We were both extremely keen to read it as soon as possible so here we are. Overall, I will agree with Thea’s feelings about the book.

The premise is fab: a time travel student and a musician herself, Joss is hoping to major in Music History and as such, she wants to travel back in time to see the birth of Blues. That premise is super fun in itself (and very similar to Connie Willis’ time travel books which also feature historians going back in time to observe important events in history). But Singing the Dogstar Blues is not only about time travel but also about a school where time travel is taught. Imagine my disappointment when it became clear that this premise was secondary at best and time travelling shenanigans happened only toward the end of the book. In all honesty, I believe this disappointment informed most of my reading of the book.

Those feelings aside, Singing the Dogstar Blues is an undeniably fun read and one of those extremely rare examples of pure SciFi YA too. One that features a futuristic world with first encounters with aliens, time travel and no romantic subplot in sight. Although a little bit sketchy on the Hard Science side of SciFi (the whole thing with DNA and genetics begged for me to suspend disbelief) , I did love what the author did with the characters, with the interaction between Humans and Chorians as the latter were really and truly aliens.

In that sense, the time travel might be the bait but what really hooks are the main themes of identity and friendship that permeate the story. I loved the differences between Joss and Mav as well as how they eventually came to be connected. Although I suspect that had I been on Joss’ shoes I would have gone off running in the other direction when asked to join my mind with an alien, I enjoyed reading about her conflicted thoughts about it and the eventual denouement worked for me because it took both characters’ needs into consideration. There is also a great, equally fun extra short story in this new edition of the book that continues their story after the events at the end of Singing the Dogstar Blues.

Even though I can’t really say it is anything extraordinary, there are many things that commend Singing the Dogstar Blues: the characters (especially Mav), the fun times I had with it, the thematic core of the novel. Sometimes that is more than enough.

I saw the assassin before she saw me. She was eating noodles at one of the hawker bars, watching the university gates. I knew she was a killer because old Lenny Porchino had pointed her out to me at the Buzz Bar
two nights ago.

‘Hey, take a look at that skinny kid with the frizzy hair,’ he’d said, nodding his head towards the doors behind me.
We were sitting in Lenny’s private booth, hidden from general view.

I shifted in my seat until I could see her. Skinny, frizzy and mean.

‘What about her?’ I said, banging my harmonica against the ?at of my hand. I had just ?nished jamming with the band and my harp was full of slag.

Tori Suka didn’t ?t my idea of someone who would work for the big-money families. Too rough. She was wearing the same kind of student gear as I was: black long-wear jeans, matching jacket. Standard stuff you can get from any machine.

Ebook available for kindle US, google, nook, kobo and sony