Kill All Enemies is the newest book by Melvin Burgess, considered by many to be the grandfather of YA fiction and winner of the Guardian Children’s Fiction Prize and of the Carnegie Medal. Burgess’ new book is a fictionalised account of real-life stories of kids from Pupil Referral Units (PRU’s, where excluded students are sent) and we are delighted to be a part of his blog tour today. 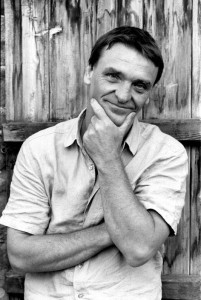 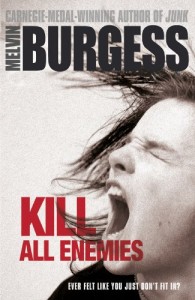 Please give a warm welcome to Melvin Burgess!

I’m in the pub in Leeds town center with the four members of Kill All Enemies – the band I took the name of my new book from. It might look like a night out on the beer. In fact, this is a serious research session. Four drunk and soon-to-be-getting drunker Metal Heads might not seem to be the best way of getting to the truth of the matter. But I was after stories, impressions and character. You can bet that these four guys had all of those in plenty.

There were four of them – Matt, the band leader – guitar and vocals, and song writer; Jamie Juggernaut (Because nothing stops our Jamie) on drums; Jamie Young Blood – a late arrival who needed to be distinguished from the Juggernaut – on bass; and Nick, on lead guitar. They all had something to say, but I’m going to tell you about Jamie Juggernaut and Matt here, since they are the two I use most to get a lift off for my character Rob in Kill All Enemies, the book.

They told me their stories one at a time. They wanted it done in different ways. Jamie wanted to tell us all. “I want my brothers around me,” he said. Matt wanted it to just be me and him, sat to one side as he told his tale. I don’t really know what I was expecting them to say that night, but I certainly wasn’t expecting what came out. You can get the general tone of both their childhoods from the book, and quite a few of the stories in there come from them. The Heavy Metal t-shirt was one; getting bullied at school because of the music you like is another; the incredible respect they both had for their mothers is another. But the fundamental theme from that night from both of them was the violence they had to face at home.

They both extremely violent step dads who had made their lives a misery for years. Some of the stories they told would make your hair stand on end. They suffered at the hands of these men considerably, but the most extreme violence had been aimed at their mothers, and even though it was their mothers’ choice of men that had put them in that situation, they came out of it with huge respect for their mums, and a tremendous love. Like Billie, who I talked about earlier, they gave everything to the people they loved. Also like Billie, they had somehow made it through that experience and out the other side to be kind, thoughtful, considerate lovely people. I have the utmost respect for both these guys – I’d have been bitter and twisted, you betcha! I don’t know how they managed the fundamentally creative act of transforming a dreadful start to life into something so worthwhile.

It was almost funny. They were big lads. They had the long hair, the clothes, the tattoos. They looked terrifying – not the sort of people you’d want to meet down a dark ally at night. But one you got talking, you found yourself in the company of kind, gentle, considerate, thoughtful people. How on earth had they managed to emerge from that sort of background into such good people?

There’d been no counselling or anything like that – they’d done it themselves – and perhaps with help from their mums. The music was big part of it, though. “Music is anger,” said Jamie. Both he and Matt used to psyche themselves up for a gig by visualising their step dads – then they could go out thrash hell out of their instruments. They were quite a thing on stage. It was death Metal – Matt had the death growl. Boy, they made a noise, full to the brim with life and rage. I honestly think the music was their way of transforming all that pain and anger into something useful in their lives.

Pretty soon the boys had enough of beer and got onto Jager bombs. Not for me – I did all that years ago, thanks. Many hours later I staggered off into the night and left them still going. I’d spent far less than I would have taking out a lawyer, say – lads of that age don’t have a lot of money. They’d had a good time, and I think they found it cathartic. Those kind of stories are things that people often don’t talk about – not because they can’t, but because they don’t always want to load it onto other people. They were a true band of brothers, through – turning their lives into music. Respect! If those kind of qualities and those kind of abilities could be turned into money, those guys would be millionaires by now.

About the author: Author of the modern classic Junk, winner of many prizes, including the Carnegie Medal and the Guardian Children’s Fiction Prize, Melvin Burgess is a writer of great insight and sensitivity. Often challenging, never boring, he’s always completely in touch with his readership and never more so than in this new novel, by turns painful, funny, heartbreaking and ultimately uplifting. Melvin Burgess continues to set the standard for YA fiction.

Make sure to check out the next stop on the tour at Book Angel Booktopia tomorrow.