Today we are delighted to have E. J. Swift over to talk about the inspirations for Cataveiro, book 2 in The Osiris Project trilogy. 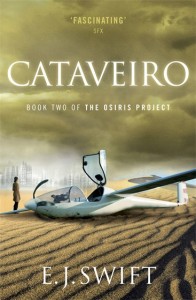 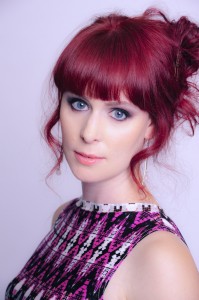 Please give it up for EJ Swift, everyone!

At some point in 2005 in Manchester whilst allegedly studying for a degree, I found myself writing The Last Balloon Flight, a fantastical story charting a journey across a flooded world. This particular novella remains in the trunk box, but it did become a seed for The Osiris Project trilogy, and the eponymous, ocean-bound city of the first book. The balloon idea clung too, later re-emerging as an obsession of one of the characters who dreams of escaping the city’s clutch, and as an Osirian myth in which the balloon’s passengers were said to be searching for the fabled lost city. Whether or not they found it, was left to the listener’s imagination.

Nature has been a great love all my life. I’ve always been inspired by vast, extreme landscapes – everything from the icebound continent of Antarctica to the barren Atacama desert to the silent, utter emptiness of space. I’ll watch any documentary by David Attenborough – in particular the Planet Earth series of the last few years have been stunning. So it was almost inevitable that a growing awareness of climate change would feed into my writing. 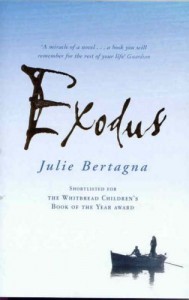 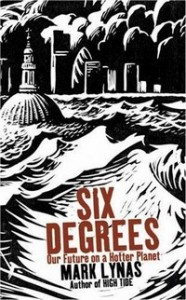 The first fiction I remember reading which explicitly engaged with climate change was Julie Bertagna’s Exodus. With that evocative pale blue cover, a lone boat amidst an endless ocean, it was an intriguing, thought-provoking read. Later, I was hugely indebted to Mark Lynas’s Six Degrees: Our Future on a Hotter Planet, and some of the scenarios he outlines became a template for how a futuristic landscape might look: a globe girdled by desert, with civilization pushed back towards the poles.

The possibilities for stories in this scenario were endless, and one thing that was important to me in creating a trilogy was for each book to have a different feel. In Osiris, the city is cut off from the rest of the world. Its citizens believe themselves the last inhabitants on Earth; the atmosphere, and the social conditions, are hostile. It’s very cold, very claustrophobic, and very isolated, and the ocean filters through everything from the salt rituals of the citizens to the city’s justice system.

When I came to write Cataveiro, I wanted to create something different. 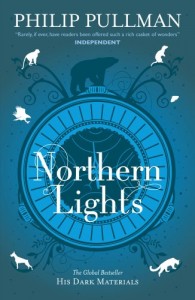 There is a point in Cataveiro where the lead character, pilot and cartographer Ramona Callejas, reflects that, ‘the world was once small but now it is vast again’. I’ve always been drawn to fiction which explores that romantic quality of venturing into unknown landscapes, from Philip Pullman’s Northern Lights, where Lyra is obsessed with the idea of ‘the north’, to the lyrical account in Wind, Sand and Stars by pilot Antoine de Saint-Exupéry. I wanted Cataveiro to capture something of this sense of mystery and adventure.

In some cases, a single image inspired a train of thought. One of the most moving documentaries I’ve seen, Nostalgia for the Light (2010, dir. Patricio Guzmán), explores the dichotomy between the Chilean women who still search for the remnants of relatives who were executed during Pinochet’s regime, believed to be buried in the Atacama desert, whilst colossal telescopes in the same arid desert are able to look further into the universe than we have ever seen before.

I imagined the ALMA telescope array abandoned centuries later. How might that look to my Patagonian pilot, and what new secrets might the desert withhold? 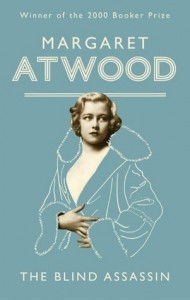 There’s an intrinsic romance about abandoned places, but it was also crucial to me to show a glimpse of what had been lost in the transition to this post-apocalyptic world. The role of stories as currency, captivation and as a source of ambiguity was as important as the landscapes which provoked them. I looked to writers like Jeanette Winterson and Margaret Atwood, who use layers of stories in their work like a lens focusing and retracting: books such as The Stone Gods and The Blind Assassin. I also looked to the beauty and playfulness of story-telling that I found in the work of Spanish and Portuguese-speaking writers. I loved Borges’s lyricism in Dreamtigers, and Roberto Bolaño’s perpetual, rule-breaking deviations. I was intrigued by contemporary Brazilian writers Chico Buarque and Bernardo Carvalho.

In particular, I was inspired by Angélica Gorodischer’s Kalpa Imperial. I’m in awe of the way she can convey centuries of history through the medium of a single location, whilst never losing sight of the emotional resonance of the people who live there, and the way she weaves stories into stories, such as the penultimate chapter of Kalpa Imperial, an extraordinary account of a desert crossing.

In Cataveiro, the now-extinct jaguar of the vanished Amazon jungle has an almost mythical status, and the tale of the last jaguar has become part of a shared popular culture, with every traveller eager to recount their own version of its demise. Meanwhile, the lost city of Osiris is reduced to a legend; a place of cannibals, aquatic-people and ghosts.

About the author: E. J. Swift is the author of Osiris and Cataveiro, the first two volumes in The Osiris Project trilogy. Her short fiction has appeared in anthologies from Salt Publishing, NewCon Press and Jurassic. She was shortlisted for a 2013 BSFA Award in the short fiction category for her story Saga’s Children (The Lowest Heaven, Jurassic). When not writing, she is kept busy as a slave to cats and an aficionado of the trapeze.