In which the wonderful Sherri L. Smith talks about her new novel, THE TOYMAKER’S APPRENTICE.

Today’s guest is Sherri L. Smith, author of Flygirl and Orleans, two of the Smugglers’ favourite books. Her new book is The Toymaker’s Apprentice, a Nutcracker retelling and her first Middle Grade novel. 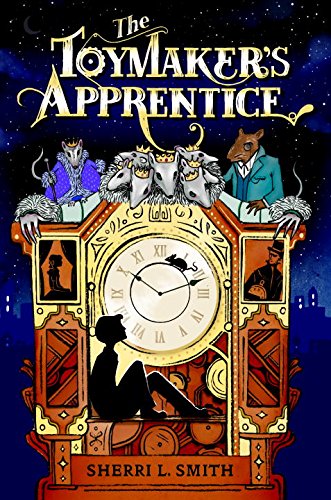 Please give it up for Sherri!

Let’s just start by saying The Toymaker’s Apprentice is set in a crazy, mixed up world. First of all, there’s the world we know. The story is set in 1815, the world is at war with itself, as usual, but also trying to broker a peace. So there’s a big European treaty going on in Vienna, the Ottoman and Prussian Empires are shooting it out on the battlefields and Napoleon is in jail. Technology is making a leap in clockwork automatons and steamboats and stuff is just happening everywhere in the human world. And then there is the world of mice, which has its own kings and queens and legends and terrors, some of which overlap with our world, like the Pied Piper of Hameln—a fairy tale to humans, but a history of genocide to rodents. And then there are educated squirrels who devote their lives to study, inscrutable cats and strange catacombs and labyrinths that riddle the underbelly of great cities are full of… mysteries, we’ll say. Mysteries that run the world.

About one third of all of this comes from the original story, The Nutcracker. With all respect to E.T.A. Hoffman—he’s got his own insane world building going on—I took some liberties. Probably the greatest challenge was explaining the role of clockwork in the book. Without giving too many spoilers, we’ll say that clocks can run, or align with the rhythms of the natural world in ways most people never imagine. Stefan, the hero of our story, is a toymaker’s apprentice who becomes journeyed (the next step in training) to a clockmaker. Because of the clashes going on between the rodent and human kingdoms, Stefan gets a crash course in clocks. My first instinct was to keep it simple and let the reader fill in the blanks with their imagination. That was a bit lazy on my part. If pressed, I could have told you how things worked, but I was afraid of overwhelming the story with minutiae.

Until my editor asked for minutiae. More details, more rules. So I cracked open some clock making manuals and examined clocks in online museums. I thought about time and balance and counterbalance. And I rewrote the introduction to the great clocks in the book.

Folks, I went too far. That’s the trouble with world building. You, as the author, have to know what the whole house looks like before you write a scene that takes place in just one room. Even if you never show the rest of the house. It’s always a challenge as a speculative writer to decide how much of the house to show. After all, if you’d built an entire mansion, wouldn’t you want to drag everyone through each room and explain to them how hard you worked to find just the right paint color, not to mention the wood for those floors?

Right. So, the trick is balance. To switch metaphors, how much is enough to give the reader a meal, without stuffing their faces with more than they care to chew? It’s not an all-you-can-eat situation. It’s that weird, newer phrase smorgasbords use—all you care to eat.

I overfed my editor. I redesigned the meal. What is now on the page is exactly enough. It’s led me into some really interesting conversations with readers as they ponder the meaning behind the rules of the world. And that is awesome. That’s what you want. Something complex enough that the taster wants to guess at the ingredients, and yet delicious enough that they shake their heads in wonder and take another bite. How you do that is trial and error. But first, you have to eat it all yourself before you can decide. That means research, write, discard, recreate, rinse, repeat until even Goldilocks would call it “just right.”

Stefan Drosselmeyer is a reluctant apprentice to his toymaker father until the day his world is turned upside down. His father is kidnapped and Stefan is enlisted by his mysterious cousin, Christian Drosselmeyer, to find a mythical nut to save a princess who has been turned into a wooden doll. Embarking on a wild adventure through Germany, Stefan must save Boldavia’s princess and his own father from the fanatical Mouse Queen and her seven-headed Mouse Prince, both of whom have sworn to destroy the Drosselmeyer family.

Based on the original inspiration for the Nutcracker ballet, Sherri L. Smith brings the Nutcracker Prince to life in this fascinating journey into a world of toymaking, magical curses, clockmaking guilds, talking mice and erudite squirrels. 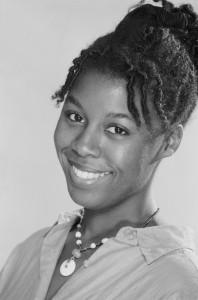 Sherri L. Smith is the award-winning author of YA novels LUCY THE GIANT, SPARROW, HOT SOUR SALTY SWEET, FLYGIRL and ORLEANS. In October 2015, she makes her middle grade debut with THE TOYMAKER’S APPRENTICE from G.P. Putnam and Sons for Penguin Random House.

She loves her family, travel, chocolate chip cookies, reading, and and a really good cup of tea.