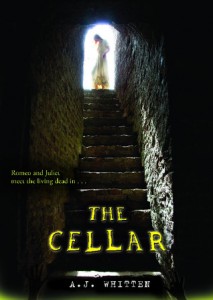 Meredith Willis is suspicious of Adrien, the new guy next door. When she dares to sneak a look into the windows of his house, she sees something in the cellar that makes her believe that Adrien might be more than just a creep—he may be an actual monster.

But her sister, Heather, doesn’t share Meredith’s repulsion. Heather believes Adrien is the only guy who really understands her. In fact, she may be falling in love with him. When Adrien and Heather are cast as the leads in the school production of Romeo and Juliet, to Heather, it feels like fate. To Meredith, it feels like a bad omen. But if she tries to tear the couple apart, she could end up in the last place she’d ever want to be: the cellar. Can Meredith convince her sister that she’s dating the living dead before it’s too late for both of them?

Why did I read this book: I’ve been in a zombie kind of mood lately (if you couldn’t tell). When I first saw this book and read the tagline, I was not interested at all – but then reviews started to roll in and it seems that the book had been mis-categorized. Instead of this being a teeny-bopping paranormal romance of the Twilight variety (Romeo and Juliet for ZOMBIES!), it’s actually a horror novel. And that is something I can definitely get on board with.

Things haven’t been the same at home since that one fated night a year earlier, when Heather swerved into oncoming traffic, getting into an accident that ended her father’s – riding in the passenger seat – life. Since then, Heather and Meredith’s mother has disconnected with emotion and responsibility by spending all her time shopping at the mall, and Heather has fallen from star student to depressed, disinterested teen. Try as Meredith might, she can’t find a way to connect with her mother or younger sister, though she struggles to hold her family together as best she can. Everything changes once more with the arrival of a new family that moves into the dilapidated house next door. Adrien St. Germain takes the small, sleepy Massachusetts town by storm as the Hot New Guy – complete with his perpetual sunglasses, his sweet camaro, and his devastating good looks. Heather finds herself falling hard for Adrien, especially when they are cast together as the leads in the school production of Romeo and Juliet.

Meredith seems to be the only person in the entire town seems to be immune to Adrien’s charms. There’s something about the new guy that doesn’t seem right. First, there’s his reclusive mother (whom no one has ever seen). Then, when Mer gets a glimpse behind Adrien’s glasses she swears she sees maggots and blowflies instead of eyes. And then there’s the small matter of disappearing people in town…

Meredith knows that Adrien is not who he pretends to be, and with her sister – and everyone else in town – fallen to the boy’s spell, Meredith alone must discover the truth of the St. Germain family before it is too late.

I wanted to love The Cellar. I really, really did. The book’s concept is fantastic and begins strong, as it perverts a well-known YA paranormal romance trope: the Hot New Guy (who happens to be a monster and is obsessed with quiet, everyday girl). Adrien rolls up into town all Edward Cullen-y with his sweet ride and his cool clothes and his otherworldly air. Of course, all the girls in school swoon for his badass air of nonchalant hotness, and, of course, one girl in particular catches Adrien’s eye. The relationship between Inhumanly Hot Adrien and Shyly Disengaged (and Damaged) Heather is instantaneous, and the spark of that attraction soon blooms to full on I LOVE YOU I MUST HAVE YOU ALWAYS AND FOREVER PRECIOUSSSS obsession status in a matter of days. Yes, this is almost the exact same progression as Twilight (and all the YA paranormal romance books that came after it).

The difference with The Cellar? It treats the 100 year-old monster crushing on a teenager as the truly creepy, disturbing, obsessive relationship that it actually is.

I loved the idea of The Cellar – because Adrien is treated as a ravenous, scheming monster that wants to steal Heather to be his “forever bride” and fantasizes about killing and eating her family. I loved that this teenage “love” is unmasked as obsession, and that essentially, The Cellar turns Twilight on its head and shows just how fucked up this particular relationship is. I loved the brutality of The Cellar, the descriptions of Adrien and his “mother” luring victims, playing with them, and devouring them piece by piece. Actually, the mother-son relationship and story at large also kinda reminded me of that Stephen King movie Sleepwalkers, with the giant cat shapeshifters that would devour the souls of young girls. It’s a fun movie. But, I digress.

While I liked The Cellar in theory, however, there is a disconnect between a good idea and a well written novel. Unfortunately, this YA horror title tripped up in its execution. First, the book is written in an awkward narrative structure, rotating from Meredith’s first person point of view voice to Heather in the third person, and then to Adrien in the third person. Not only did this get confusing (especially in scenes with both Heather and Meredith), but Adrien’s sections were incredibly cheesy. There’s a lot of repetition and laughable inner-dialogue (i.e. “She would pay. Oh yes, she would pay.”), a lot of attempts at being grotesque with descriptions of blowflies and what-have-you, but never really succeeding because of the nacho cheese-style voice. Furthermore, as the book is a slight 276 pages – and these are small sized pages with huge font – there just isn’t enough time to develop the characters into anything beyond two-dimensions.

The most disappointing thing about The Cellar, however, came in the book’s final act – literally, with the opening night of Romeo and Juliet. There’s a flurry of action as zombies take over the town in a half-baked plot development, and then it is revealed to readers that Adrien TRULY loves his Juliet, Heather, and is painted in the end as somewhat sympathetic (you know, despite his brainwashing of her family members, his schemes to devour her sister, and his murders of countless other women and men in the town). At the end of the book, Heather’s reaction to these revelations is NEVER addressed, leaving the book feeling rushed and sadly incomplete.

I will hand it to mother-daughter writing team A.J. Whitten, however, as they nail the tragic, obsessive nature of Romeo and Juliet – which, let’s face it, isn’t really romantic is it? It’s actually a very creepy “love story.” The macabre nature of this teenage tragedy is encapsulated wonderfully in The Cellar, and I appreciate that.

The Cellar isn’t a bad book, and it has some wonderful ideas and high points – unfortunately, due to its brevity and the many shortfalls in terms of writing, it never lives up to the promise of its ideas.

Once upon a time, there used to be four of them. Now, there were only two.
They stood together by the window, watching. The only sound in the house came from the aquariums on the far wall. Two tanks, both large, the filters humming, the fish swimming back and forth, back and forth, waiting to be fed.

“Did you choose one yet, Adrien?” Marie asked. The tall, dark-haired woman beside him was not his mother, but over the last ninety years Adrien had come to think of her in that role. Not with love, but with the kind of understanding that came with someone who tended to his needs. Not that he had many, but she was there, and had been from the day he’d been awakened.

She’d helped him escape from the farm in Haiti where both of them had been raised from the dead for one purpose—to be slaves and work the fields morning and night, serving the whims of a master who had realized the potential for cheap, resurrected labor. She had helped him make his life, such as it was, become something other than what had been intended. And one day, he had promised, he would take care of her. When he had proven himself capable.

Everything she asked, every task she gave him, was a test. To see if he had what it took to become leader. Then, and only then, she’d said, would they expand the family. Such as it was.

Except, Adrien had grown impatient with waiting. With letting Marie make all the decisions. He was ready to lead the family, he knew it. Hadn’t he proved it back in Boise? He’d been the one to sacrifice the others, to make that call.

But Marie kept telling him to wait. If he heard that word again, he would throttle her. The hunger in him for more, for another like him, for a companion who understood his loneliness, grew every day, became something he could no longer deny or keep quiet. And now, he had finally met someone who intrigued him. Who made him, the creature who shouldn’t desire…

“Yes,” Adrien said finally, watching as the girl exited a car and walked into the yellow house. The girl had a small, sad way about her, but Adrien intended to change that. All he needed was time. Not that he had a lot of time, what with Marie drooling impatiently beside him, but with this girl, he suspected he didn’t need much. “You will like her. Very much.”

Rating: 6 – Good. Although it strayed towards cheesiness and I wavered between a 5 and 6, the overall idea of the book is so good that I have to bump up the grade a notch.

Reading Next: Slice of Cherry by Dia Reeves

Book review: A Summer to Remember