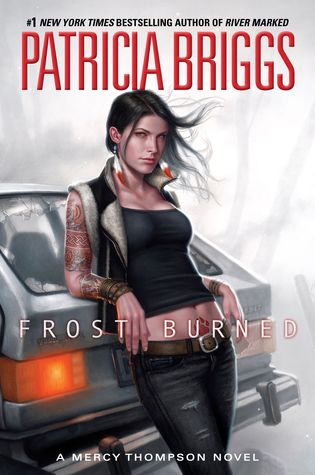 Mercy Thompson’s life has undergone a seismic change. Becoming the mate of Adam Hauptman—the charismatic Alpha of the local werewolf pack—has made her a stepmother to his daughter Jesse, a relationship that brings moments of blissful normalcy to Mercy’s life. But on the edges of humanity, what passes for a minor mishap on an ordinary day can turn into so much more?.

After an accident in bumper-to-bumper traffic, Mercy and Jesse can’t reach Adam—or anyone else in the pack for that matter. They’ve all been abducted.

Through their mating bond, all Mercy knows is that Adam is angry and in pain. With the werewolves fighting a political battle to gain acceptance from the public, Mercy fears Adam’s disappearance may be related—and that he and the pack are in serious danger. Outclassed and on her own, Mercy may be forced to seek assistance from any ally she can get, no matter how unlikely.

Stand alone or series: Book 7 in the Mercy Thompson series

Why did I read this book: I’m a huge fan of the Mercy Thompson books (heck, I have loyally reviewed each book in the series every year of release since Iron Kissed back when we first started the blog), and of the amazing Patricia Briggs. I’ve been eagerly awaiting a new Mercy book for two years, and could not wait to dive into Frost Burned.

**WARNING: This review contains unavoidable spoilers for the first six books in the series. If you have not read books 1-6 and want to remain unspoiled, look away! You have been warned.**

Mercy Thompson, VW mechanic and coyote shapeshifter, has finally made the commitment to mate and marry Adam Hauptman, the Alpha werewolf of the Tri-Cities pack. While their honeymoon was more eventful than perhaps they would have liked (see River Marked and ensuing chaos), Mercy and Adam’s mate-bond is a strong and happy thing – and Mercy has finally gotten into the swing of married life. The new role has come with significant challenges with Adam’s pack (getting a group of werewolves to accept a mere coyote skinwalker as one of their leaders is no small feat), but now Mercy faces one of the biggest hurdles of married life: bonding with her teenage stepdaughter, Jesse. After agreeing to take Jesse out to hit the midnight sales following Thanksgiving dinner, Mercy gets into a late night car accident. When she tries to reach Adam through her mate bond for help, she discovers that he is missing – and in great pain and rage. The rest of the pack is unreachable, and all of Mercy’s supernatural friends are also mysteriously absent, leaving Mercy in a terrifying and urgent situation. Needing to protect the few pack members she can locate, Mercy is also forced into forming tentative alliances with others (includingfae and even the scornful vampires Stephan and Marsilia) to find her mate and her pack, and to protect those she loves from a shadowy government agency intent on bringing the recently, publicly outed werewolves down.

What Mercy discovers, however, is a conspiracy that reaches beyond secret government agencies, and has its roots in supernatural power-struggles far above Mercy’s paygrade. But resourceful, tough, courageous Mercy is up to the challenge – especially with the lives of all of those she loves at stake.

The seventh installment in the Mercy Thompson series, Frost Burned returns readers to the Tri-Cities and Mercy’s struggles as she grapples with her mate bond, her husband, and her pack. This time around the stakes are even higher than ever before, as she’s ripped apart from Adam and the future of werewolves in the United States hangs in the balance. After the brief respite in River Marked (and Mercy learning much more about her father, her heritage, and The Coyote), Frost Burned returns to the Tri-Cities and all of the tensions that have been simmering ever since the werewolves came out to the public, with Adam as the poster boy for the species. With that kind of fame comes trouble, and someone is desperately intent on bringing public opinion (and government legislation) against the wolves in dramatic fashion by focusing on Adam and his pack. I loved this return to some of the larger issues in Mercy’s world, and the overarching mystery of just who is pulling the strings of this conspiracy. I also loved the return to feature ALL of the various major players in Mercy’s adventures over the course of the series – including the fae (Zee is back, as is his son Tad), the other wolves (including a major role for Asil, a character we know mostly for his involvement in the spinoff Alpha and Omega series!), and the vampires. The overall thrust of the plot, however, is a little clumsier than Briggs’ usual – the final reveal of the the person behind Adam’s capture and the harebrained scheme to get him to publicly assassinate a popular anti-werewolf politician are abrupt and clunky. That said, the story itself is conceptually strong, and I love that Mercy is back home and learning from her past experiences and relationships. That is awesome.

Also awesome, per usual, is Mercy’s characterization. Mercy is my favorite urban fantasy heroine, period, because of her common sense, her inherent under-powered nature and her ability to use her smarts and her unique abilities to her advantage. In a world overrun by creatures that are much larger, stronger, and more powerful than Mercy, she’s got to think quickly in order to survive and overcome all of the challenges stacked against her. And survive Mercy does – I love that this book has her fighting by herself for a significant portion of the novel, where she cannot rely on the pack or on Adam for help. (In fact, it ends in super dramatic fashion, with Mercy doing battle for a surprising ally, but therein lie spoilers!) In addition to her usual kickass sensibility, Mercy also confronts and uses some of the abilities she’s discovered over the past few books, including her ability to talk to and release ghosts, and her unique heritage as the daughter of the Coyote.

And it’s not just about Mercy, either – Frost Burned also includes Adam’s point of view for a couple of chapters, much to the delight of Adam fans (like myself!). While Adam is a dominant wolf and has the predictable urges to protect and rescue, Mercy does not always require protection or rescue, and I love that we SEE Adam’s thoughts and his acceptance of his stubborn, wonderful wife. For all that he knows she is a fragile mortal, he loves her for her fierceness and independence and fight, and would never try to stifle that. Their relationship is one built on mutual love, trust, and respect, and this is a refreshing, wonderful thing to read, especially in an ongoing series.

One last thing on the character front: I loved the addition of Asil to this storyline! It’s very interesting to see him from Mercy (and Adam)’s perspective, an incredibly old and dominant wolf that has a tenuous hold on sanity and his bloodlust, but who you undoubtedly want on your side in a rumble.

I truly enjoyed Frost Burned. Finally, I feel like the series is coming to a more focused overall direction, while incorporating elements from prior books. I cannot wait for what comes next for Mercy, Adam and the gang.

“You should have brought the van,” said my stepdaughter. She sounded like herself, though the expression on her face was still a little tight.

“I shouldn’t have brought anything, including us,” I muttered, shoving harder on the hatch. My Rabbit had a lot of cargo space for a little car. We’d only been here twenty minutes. I shop at Walmart all the time, and I never come out with this much stuff. We’d even left before the big midnight reveal. And still—I had all this stuff. Most of which had not been on sale. Who does that?

I looked up from the stubborn lid of my poor beleaguered car and glanced around the parking lot of Home Depot. “Obviously,” I muttered.

Home Depot wasn’t open at midnight on Black Friday, but the parking lot was huge and was doing a good job of absorbing the overflow from Walmart. A bicycle couldn’t have parked in the Walmart lot. I wouldn’t have believed there were this many people in the Tri-Cities—and this was only one of three Walmarts, the one we’d decided would be the least busy.

“We should go to Target next,” Jesse said, her thoughtful voice sending chills down my spine. “They have the new Instant Spoils: The Dread Pirate’s Booty Four game on sale for half off the usual price, and it was set for release tonight at midnight. There were rumors that problems in production meant before-Christmas shortages.”

Codpieces and Golden Corsets: The Dread Pirate’s Booty Three, better known as CAGCTDPBT—I kid you not; if you couldn’t say the letters ten times in a row without stumbling, you weren’t a Real Player—was the game of choice for the pack. Twice a month, they brought their laptops and a few desktops and set them up in the meeting room and played until dawn. Vicious, nasty werewolves playing pirate games on the Internet—it was pretty intense, and I was a little surprised that we hadn’t had any bodies. Yet.

Reading Next: When We Wake by Karen Healey

We have ONE copy of Frost Burned up for grabs, courtesy of the publisher! The giveaway is open to addresses in the US only and will run until Sunday March 10 at 12:01am EST. To enter, use the form below. GOOD LUCK!

Book Review: The Book of the Maidservant by Rebecca Barnhouse