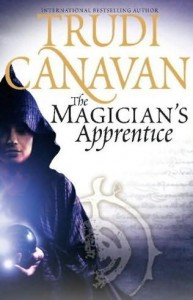 In the remote village of Mandryn, Tessia serves as assistant to her father, the village Healer – much to the frustration of her mother, who would rather she found a husband. Despite knowing that women aren’t readily accepted by the Guild of Healers, Tessia is determined to follow in her father’s footsteps. But her life is about to take a very unexpected turn.

When treating a patient at the residence of the local magician, Lord Dakon, Tessia is forced to fight off the advances of a visiting Sachakan mage – and instinctively uses magic. She now finds herself facing an entirely different future as Lord Dakon’s apprentice.

Although there are long hours of study and self-discipline, Tessia’s new life also offers more opportunities than she had ever hoped for, and an exciting new world opens up to her. There are fine clothes and servants – and, she is delighted to learn – regular trips to the great city of Imardin.

But along with the excitement and privilege, Tessia is about to discover that her magical gifts bring with them a great deal of responsibility. Events are brewing that will lead nations into war, rival magicians into conflict, and spark an act of sorcery so brutal that its effects will be felt for centuries. . .

Stand alone or series: Prequel to the Black Magician Trilogy, though can be read as a stand alone novel.

Why did I read this book: I have heard nothing but praise for Trudi Canavan, and I’m a bit ashamed that I had never read any of her books. So, when we received a review copy of her new paperback version of her latest book in the mail, I decided that it was time to get off the procrastination llama and get readin’.

In the emancipated kingdom of Krylia, taught magicians rule the upper echelons of society – although every once in a while, a “natural” comes along. According to Krylian law (and for the safety of everyone involved), natural talents must be trained by the magician that has discovered them, regardless of age, sex, or standing. Such is the position of young Tessia Dare, the only child of a humble but respected healer in the countryside village of Mandryn, under the fair-handed rule of local Magician, Lord Dakon. Determined to prove herself as a healer – despite the fact that she is a woman and no man could possibly want a female with such a vocation for a wife – Tessia works diligently as her father’s assistant. When the Hanara, the slave of Takado, a visiting magician from neighboring kingdom Sachaka, is brutally beaten and near death at Lord Dakon’s manor, Tessia rushes at the opportunity to help. But when Tessia is attacked by Takado, she reacts with a burst of power that can mean only one thing; Tessia is a natural born magician…and by law, she must be trained.

Taken in by Lord Dakon, Tessia is forced to give up her dreams of becoming a healer – much to the frustration of Jayan, a city-bred noble and Lord Dakon’s other apprentice. As it becomes clear that Tessia has a great deal of natural talent, Jayan’s frustration grows as Dakon’s attentions are divided and Jayan’s jump to becoming a full-fledged magician are unavoidably put on hold. And, when war comes to Krylia, Jayan’s dreams and Tessia’s training are put to the ultimate test. Sachakan magicians, hungry for power, have taken raids and attacks of magicians across the smaller kingdom of Krylia, and forced to band together, all the remaining magicians and their apprentices must fight back.

The kingdoms of Krylia and Sachaka represent a familiar melange of fantasy settings and tropes – there’s the WRONGNESS of slavery, the DIVIDE between the superior nobles and peasants, the TERRIBLE limitations and gender roles that society imposes on women especially. And, of course, there’s the compassionate, incredibly gifted young girl from the lower classes that single-handedly takes on all these challenges as she trains as a magician’s apprentice (grumble grumble, peasant women becoming magicians! grumble). This all would have been fine had there been something extraordinary about the characters, worldbuilding or storytelling – and unfortunately, this isn’t really the case. In terms of worldbuilding, I liked the divide and tension between Krylia and Sachaka, and the rules of magic in this world are believable and well-defined. But in terms of plotting and storytelling? Again, it’s very familiar and banal. In addition to the thematic issues (the evils of slavery and gender oppression, namely), there was no urgency to the story, no real direction. Yes, we read about Sachakan attacks on the Krylian countryside, leading to an ultimate magician battle…and yet, there seemed to be much more time spent on conversations (about said thematic issues) and very little time actually forming cohesive battle/political plans to deal with the impending war. There’s an ill-timed and undercooked romance between two main characters, magical “revelations” that really aren’t that impressive or ingenious, and…well, what else can I say? From a plotting and storytelling perspective, The Magician’s Apprentice leaves much to be desired.

As for the characterizations, as with the story at large, the cast felt similarly lukewarm and bland. Protagonist Tessia is intelligent and kind and compassionate and brave and blahdeblahdeblah. OF COURSE she learns how to harness her (almost unprecedented) magical powers in different new ways that don’t involve *shudder* violence. (Also, Tessia is a dedicated healer, which is awesome and all, but really what is this fascination with female healers/magical midwives/whatever?) I did appreciate Tessia’s struggle to fit in, both as a woman and as an apprentice/natural magician, but we never really get much into her head. The same goes for love interest and rival apperntice, Jayan, who initially resents Tessia because she throws back his Magician-studying schedule. Jayan is the typical lounging lesser son lordling (with a heart of gold underneath his carefree facade), and he falls in love with Tessia for…well, her awesome goodness, of course. Lord Dakon is rather nice too – sympathetic and patient and understanding – just as all the other female and male Kyrian magicians are rather nice and pleasant to each other. The Sachakan villains, though, led by the monstrous Takado are of course EVIL – murdering power-crazed men that use magic to kill and own slaves, beat their wives, etc. You catch my drift. There’s also the introduction of a different side of the Sachakan with the awkward introduction of Stara, daughter of a high ranking magician, about halfway through the novel. Though I found Stara an overall likable character, her storyline never really meshes together with the plot at large (unless she is something important in the later trilogy?), and I found the inclusion in the book more than a little strange.

The thing is, none of The Magician’s Apprentice is bad per se, and to be fair, Ms. Canavan does write very well – heck, I finished the book (and at 800 pages, that’s saying something)! It’s just more of the same old same. There’s nothing to distinguish this novel from a vast sea of similar material – especially given that there are a number of exceptional fantasy titles out there. This probably wasn’t the best introduction to Ms. Canavan’s work, so I think I’ll give her older stuff a go. Still, as it stands, The Magician’s Apprentice is probably a book best suited for dedicated fans of the Black Magician series – and not so much for the fantasy fan looking for something out of the ordinary.

There was no fast and painless way to perform an amputation, Tessia knew. Not if you did it properly. A neat amputation required a flap of skin to be cut to cover the stump, and that took time.

As her father deftly began to slice into the skin around the boy’s finger, Tessia noted the expressions of the people in the room. The boy’s father stood with his arms crossed and his back straight. His scowl did not quite hide signs of worry, though whether it was sympathy for his son or anxiety about whether he’d get the harvest finished in time without his son’s help, she could not tell. Probably a bit of both.

The mother held her son’s other hand tightly while staring into his eyes. The boy’s face was flushed and beaded with sweat. His jaw was clenched and, despite her father’s warning, he watched the work being done intently. He had remained still so far, not moving his wounded hand or squirming. No sound had escaped him. Such control impressed Tessia, especially in one so young. Landworkers were said to be a tough lot, but in her experience that was not always true. She wondered if the child would be able to keep it up. Worse was to come, after all.

Her father’s face was creased with concentration. He had carefully peeled the skin of the boy’s finger back past the joint of the knuckle. At a glance from him she took the small jointer knife from the burner and handed it to him, then took the number five peeler from him, washed it and carefully set the blade over the burner so it would be seared clean.

When she looked up, the boy’s face was a mass of wrinkles, screwed up tight. Tessia’s father had begun to cut through the joint. Looking up, she noted that the boy’s father was now a pasty grey. The mother was white.

‘Don’t watch,’ Tessia advised in a murmur. The woman’s head turned abruptly away.

Additional Thoughts: The original trilogy, The Black Magician, is comprised of The Magicians’ Guild, The Novice, and The High Lord.

AND, Trudi Canavan has a new novel, The Ambassador’s Mission, the first book in a new spinoff trilogy that begins a generation after the events of The High Lord. 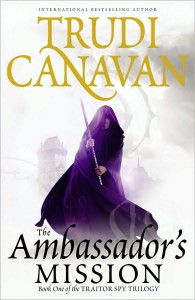 Sonea, a Black Magician of Kyralia, is horrified when her son, Lorkin, volunteers to assist the new Guild Ambassador to Sachaka. When word comes that Lorkin has gone missing, Sonea is desperate to find him, but if she leaves the city she will be exiled forever. And besides, an old friend is in need of her help.

Most of her friend’s family has been murdered – the latest in a long line of assassinations to plague the leading Thieves of the city. There has always been rivalry, but now the Thieves are waging a deadly underworld war, and it appears they have been doing so with magical assistance.

Although, this time, I think I’ll start with The Magicians’ Guild before tackling The Ambassador’s Mission.

Rating: 6 – Good, although leaning heavily towards a 5. I’ll make sure to give her older stuff a try before making any drastic decisions, though.

Reading Next: Monsters of Men by Patrick Ness

I Love This Series: The “13 Treasures” Trilogy by Michelle Harrison