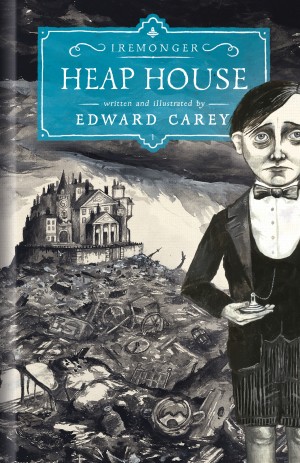 The extensive Iremonger family of Filching (“kings of mildew, moguls of mould”) has made a fortune from junk, building a dark and sprawling mansion from salvage scrap. Heap House is surrounded by the dangerous, noxious, shifting Heaps that stretch beyond its bounds, while within its walls, certain objects begin to display strange signs of life.

Young Clod Iremonger is on the cusp of being “trousered” and betrothed (unhappily) to his cousin Pinalippy when he meets the plucky orphan servant Lucy Pennant, with whose help he begins to uncover the dark secrets of his family’s empire. Mystery, romance and the perils of the Heaps await!

Gorgeously and ghoulishly illustrated by the author, the novel is peopled with unforgettable characters–anxious, animal-loving Tummis with his pet seagull, menacing cousin Moorcus, dreadful Aunt Rosamud and more. As Carey writes, “Every life is thick with rubbish, but the Iremongers did it with a difference . . .”

Stand alone or series: First book in the Iremonger trilogy

In an alternate Victorian Britain, in the outskirts of London, Heap House stands by the salvage heap, a huge, long-standing, shifting, boiling, stinking pile of objects (and other matters) that has, for better or worse, its own habitat.

Inside Heap House, the Iremonger family is almost a mirror image of the heaps outside, for they are too a huge, long-standing, shifting, boiling, stinking group of people who have made Heap House their own habitat into a structured, regulated, controlled environment from which no Iremonger ever leaves – not that they would ever want to. For the Iremongers are traditional, are The Best, especially those whole live upstairs. Each Iremonger has its Birth Object, chosen for them by the family matriarch and something they are not supposed to part with. Each Iremonger has its place in the family and in the house and this is especially true about those generic Iremongers who live downstairs. The upstairs Iremongers intermarry their cousins and they always stay near the heap. Unless they are City Iremongers, tasked with travelling to London every day in their own train, to do Important Work.

Young Clod Iremonger, one of the privileged Upstairs Iremongers is about to celebrate his 16th birthday when he will be trousered and betrothed to one of his cousins when he is called to find a missing birth object. Clod is a special case because he can hear the birth objects speak – and they tell him their names, whatever that might mean. In the meantime, orphaned Lucy Pennant is found to be a missing Iremonger and brought back to the family bosom.

The story here could be thought to start with something as straightforward as: Clod Iremonger’s Aunt Rosamud’s brass door handle goes missing just as new servant Lucy Pennant starts working at Heap House. But the roots of Heap House run deeper and downstairs there is an Iremonger who wants to remember her own name, the name she had before being brought here, before becoming a generic Iremonger.

Alternating between Clod and Lucy’s accounts of the events that take place from that moment onwards (with the odd journal, report snippet), Heap House becomes an entanglement of mysteries with a slow unravelling of the deeply unsettling truths about the Iremongers and the way they live their lives.

Heap House provides a remarkable exercise relating to matters of identity, a subject that underscores most of the story. The objects that Clod can hear name themselves; the names of the Iremongers are all cleverly spelled names that contrast to the names Clod hears; the house itself is forever changing; the first thing that happens to the Iremongers from downstairs is that they have their names and their very identity stripped from them. Just how this all fits with the overall storyline is at the core of the narrative that is only enhanced by the snippets of the fantastical that are woven into it.

The characters’ voices are fabulous, quirky enough to be different but without becoming gimmicky. Quite the contrary, the more one reads, the more nuanced those voices become especially when Lucy and Clod’s journeys become interconnected and as the characters on all sides become less caricatured.

One of the most interesting things about Heap House for me is the Downstairs x Upstairs dynamics of the house. It is easy to describe the specificities of the plot regarding the extremely controlled environment in which the Iremongers live as a dystopian society under very strict rules. That the very basic outline of that society – that hierarchical divide between upstairs and downstairs – has been so easily extrapolated from actual lived history of domestic service in Victorian and Edwardian England adds only an extra level of awesomeness for me.

Fair warning: the story ends with a horrible cliffhanger (that sent me to the bookstore to buy the sequel straight away).

All that said, Heap House is probably one of the most interesting books I’ve read recently. It’s different, it’s macabre, it is deliciously creepy. AND the book is also illustrated with beautiful drawings from the author. It’s fantastic, read it.

It all really began, all the terrible business that followed, on the day my Aunt Rosamud’s door handle went missing. It was my aunt’s particular door handle, a brass one. It did not help that she had been all over the mansion the day before with it, looking for things to complain about as was her habit. She had stalked through every floor, she had been up and down staircases, opening doors at every opportunity, finding fault. And during all her thorough investigations she insisted that her door handle was about her, only now it was not. Someone, she screamed, had taken it.

There hadn’t been such a fuss since my Great Uncle Pitter lost his safety pin. On that occasion there was searching all the way up and down the building only for it to be discovered that poor old Uncle had had it all along, it had fallen through the ripped lining of his jacket pocket.
I was the one that found it.

They looked at me very queerly afterwards, my family did, or I should say more queerly, because I was never absolutely trusted and was often shooed from place to place. After the safety pin was found it seemed to confirm something more in my family, and some of my aunts and cousins would steer clear of me, not even speaking to me, whilst others, my cousin Moorcus for example, would seek me out. Cousin Moorcus was certain that I had hidden the pin in the jacket myself and down a dim passageway he caught up with me and smacked my head against the wall, counting to twelve as he did it (my age at the time), and lifted me high up onto a coat hook, leaving me suspended there until I was found two hours later by one of the servants.

Great Uncle Pitter was most apologetic after his pin was found and never, I think, properly recovered from the drama. All that fuss, accusing so many people. He died the next spring, in his sleep, his safety pin pinned to his pyjamas.

‘But how could you tell, Clod?’ my relations wondered. ‘How could you know the safety pin was there?’

Over at Kirkus: The Guns Above by Robyn Bennis