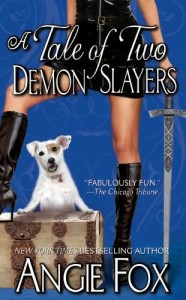 Last month, I was a single preschool teacher whose greatest thrill consisted of color-coding my lesson plans. That was before I learned I was a slayer. Now, it’s up to me to face curse-hurling imps, vengeful demons, and any other supernatural uglies that crop up. And, to top it off, a hunk of a shape-shifting griffin has invited me to Greece to meet his family.

But it’s not all sun, sand, and ouzo. Someone has created a dark-magic version of me with my powers and my knowledge—and it wants to kill me and everyone I know. Of course, this evil twin doesn’t have Grandma’s gang of biker witches, a talking Jack Russell terrier, or an eccentric necromancer on its side. In the ultimate showdown for survival, may the best demon slayer win.

Why did I read this book: I am a fan of this series, which I have been reading since it first came out.

A Tale of Two Demon Slayers is the third book in the Accidental Demon Slayer series, in which former preschool teacher Lizzie Brown discovers she has come from a long lineage of Demon Slayers. In the past two books which cover a period of roughly two months she has gained her powers on her 30th birthday, discovered that her powers came from a family she didn’t even know she had, complete with a witch grandmother who is a member of the Red Skulls (a coven of geriatric biker witches) , that those same powers were not even supposed to be hers (hence the “accidental”) , fell in love with a Greek griffin called Dimitri, had to learn to use those powers, went to Hell and back to save his family and saved the world.

In this third instalment, Lizzie is getting ready to get a much deserved break in sunny Greece with her hot boyfriend and her talking dog Pirate. But who says things go easy to Lizzie? At the airport, her grandmother decides it is time to give her a box that belonged to her mother containing an object that is an important part of a Slayer’s training – and her tutor is to meet her….in the middle of her vacation. Then, inside the box, there is an invisible bar which upon being touched by Lizzie, foretells her impending death. If that is not enough, en route to Greece, Dimitri tells her when he first went searching for her, he used Griffin magic to trace her magic and that made her vulnerable. For all intents and purposes that shouldn’t have been a problem, but someone has tried to steal this remaining “Lizzie” thread from his office in Greece. Upon arriving in his villa, they learn that there is a threat not only to his Lizzie but to his family as well.

I was expecting a lot from A Tale of Two Demon Slayers . Even though I really enjoyed the first book for its wonky humour and non-stop action, the second book set the bar higher when it dealt with a more personal, intimate side of Lizzie. But neither explored her relationship with Dimitri or her hopes and her dreams or rather, how her becoming a Demon Slayer, influenced those in depth. I was pleased to see that those issues were deftly dealt with as it all comes full circle in this book.

The story this time, focuses a lot on Lizzie, with less time for gimmicks (as fan as they usually are from the Red Skulls or Pirate) with a little bit of rebellion from Lizzie. I mean, this is her life. But ever since she came into her powers, she has been dragged around, pushed about, she hasn’t had a chance to say “no”, has she. Not that it crossed her mind – she has a duty, she knows that. But sometimes it is nice to be simply asked. There is one aspect of Lizzie’s personality that I find interesting, which is her OCD tendency to have an explanation for everything and to have everything in their places – including people. Her powers, and the overwhelming feelings for Dimitri (and Dimitri’s for her) simply do not fit in – that struggle with both is a great part of her arc.

As for Dimitri, finally, we come to understand and to get to know him more. This time we are in his turf and we see his family and his friend. Getting to know those is to get to know his traditions and therefore his motivations. I can honestly say now, that I can get on board of that relationship.

On the down side: how annoying is that the title and the blurb completely and utterly spoil the plot of the novel? Because it is not until the last few pages of the novel that we come to know that the threat comes from a second Demon Slayer? Yet, we are expecting it because of the title of the Novel!

And finally, what made Lizzie special to me was that she was effectively an accidental Demon Slayer. To see a common, preschool teacher dealing with it was both funny and interesting. But at the end of this book, there came a twist and I am not sure how I feel about that. Right now, I am sitting on the fence. I guess I will have to read the next book to see what will happens next .

Notable Quotes/ Parts: I loved the no holds barred confrontation/conversation between Dimitri and Lizzie in which both of them said what they felt and thought. It was awesome.

Verdict: A strong third instalment in a series that has yet to let me down. It remains a full of action, funny, sexy and entertaining, Urban Fantasy /Romance series. Lizzie has grown as a character and Angie Fox as an author – great stuff.

Reading Next: : Lex Trent Versus The Gods by Alex Bell