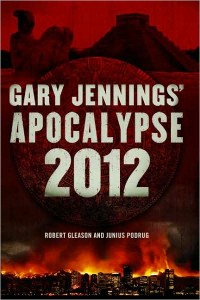 Stand alone or series: Book 3 in the Aztec series, but can theoretically be read as a stand alone novel.

Why did I read this book: I have been fascinated by the Maya ever since I met these early astronomers in the seventh grade. They had the concept of zero. They accurately recorded the length of the lunar cycle to within 0.00027 of our current measurements. They played sweet ballgames and built majestic cities, and, oh yeah, practiced all kinds of crazy human sacrifice. They also predicted the end of the world in 2012 (matching the predictions of numerous other cultures and ancient civilizations)…how could I resist this book?

Summary: (from amazon.com)
In ancient Mexico, the “End-Time Codex”–prophesizing the world’s end in 2012–is entombed. A young Aztec-Mayan slave tells us its story.

Gifted in math and astronomy, Coyotl rises to king’s counselor in Tula, a golden city of milk and honey ruled by the brilliant god-king, Quetzalcoatl, the Feathered Serpent of lore. Gathering artists, scientists and craftsmen, this legendary ruler builds a city that will awe humanity for one thousand years. But he also faces war, catastrophic drought, betrayal and the rise of an evil death-cult religion. Instituting the infamous “Blood Covenant,” its priests drag thousands of people a year atop temple-pyramids and rip their hearts beating from their chests. To stop them Quetzalcoatl must defy the flames of bloody civil war.

A thousand years later scientists discover the End-Time Codex. While struggling to decipher it, they realize their own age mirrors Tula’s. Can they crack the 2012 code and save their world from Tula’s deadly fate?

Apocalypse 2012 follows two parallel timelines. In 1000AD, the young Coyotl is one of the captured “Dog People,” taken hostage by the Toltecs. Because of a star constellation tattoo on Coyotl’s stomach, he is recognized by his captors as a stargazer, and his abilities are unparalleled. Soon Coyotl rises from lowly slave to King’s adviser, but finds himself enlisted in a struggle to prevent the power and blood hungry priests from seizing control of Tula. The King believes in the truth of the stargazers, and Coyotl rushes to complete the most comprehensive codex ever recorded without the priests’ knowledge. For more than just the future of Tula is at stake – Coyotl’s sightings not only predict the end of his civilization, but of the world in a far distant future.

Running parallel to Coyotl’s story is one of catastrophic proportions in 2012. A string of environmental catastrophes are occurring, and Earth is on the precipice of certain annihilation. NASA scientist and former professor of the US President Raab, Dr. Monica Cardiff presents these terrifying findings to the President’s Advisory Board with even more grim news – something is headed on a collision course for Earth, guaranteeing an extinction event for the planet. The same events nearly gripped Earth in Coyotl’s time, and Dr. Cardiff believes that only with the lost codex can humanity even hope for a way to save itself. Two of her finest students along with a mercenary team are in the Yucatan, evading the Mexican cartels that will certainly kill them if found, looking desperately for the last part of the codex that could save the planet…

From the synopsis, and upon reflection after having read this book, Apocalypse 2012 sounds like a blast. Engaging ideas, a pretty decent historical landscape, and apocalyptic flare – what more could a girl ask for? Unfortunately, Apocalypse 2012 fails on almost every conceivable level. The ideas behind the story are fantastic, and Coyotl’s storyline is engaging enough. However. The writing is atrocious. The characters, especially those in the modern timeline, are so flat you could scrape them off a griddle with a spatula. But Apocalypse 2012‘s most grievous offense is the fact that THE APOCALYPSE NEVER HAPPENS! (Note: I refuse to spoiler tag, because this is essential knowledge for anyone that decides to pick up this book expecting an apocalyptic thriller)

I repeat: the apocalypse – the thing that the book is titled for – NEVER HAPPENS.

The book abruptly ends before any of the cataclysmic events Cardiff and the Presidential stiffs discuss at length ever happen. If that’s not false advertising, I don’t know what is.

Without the promised apocalypse in this so-called apocalyptic novel, Apocalypse 2012 is a sort of bumbling thriller novel. Coyotl’s world is sufficiently detailed, bringing to life the Toltec-Mayan landscape with images of thriving urban centers and blood drenched step pyramids. Though the writing is cringe-worthy and frankly bizarre for most of the book (for example, in one oddly placed sex scene Coyotl’s enormous manhood unleashes a tsunami of multiple ejaculations, drenching the poor girl he’s with – but this is only after they have both spanked each other to feel like they are no longer slaves), the Toltec storyline is far more interesting than the modern timeline. While Coyotl’s sexual prowess and stargazing skills are at least entertaining, the modern counterparts are yawn inducing, especially the story following the two lesbian grad students hunting for the codex in the wilds of the Yucatan. Apocalypse 2012 suffers from an identity crisis – it leads up to an apocalypse by the end of the book but doesn’t show it, and though the historical fiction is entertaining (if poorly written), it doesn’t really serve any purpose to the apocalyptic theme of the novel. We follow the struggles of a young slave made astronomer as he tries to survive the vindictive cruelty of the Toltec priests…and what significance that has for the modern timeline is pathetically contrived. Why are these codecies so important? If an asteroid or comet is going to hurtle into the planet, how will finding a codex stop this from happening?

It simply does not compute.

I finished the book, but was really struggling most of the way. And with that said, I cannot recommend this novel.

Notable Quotes/Parts: Here’s an excerpt from the first chapter, for those who are interested.

Of our entire band, only two others survived: Tenoch, who lay on the ground unconscious—thanks to a towering, muscular warrior who had clubbed him into bloody oblivion—and Desert Flower.

Emerging from the forest, a ninth man walked through the camp—an elderly dignitary who had not participated in the fray.

His clothing confirmed his importance among his people. His loincloth was richly embroidered in vivid shades of red and green and yellow, with sparkling gems delicately weaved into the cloth. Hanging from knots were tiny bells of gold.

His mantle was long, falling from his shoulders almost to the ground. As colorful as his loincloth and as costly, it was lavishly decorated and fringed with gold.

He was at an age in life when most men no longer marched with an army unless their role was planning as opposed to leading warriors into battle.

As he stood over me and stared down, I knew what he was looking at: the star patterns tattooed on my lower belly and painted with black dye on my white loincloth.

“Who put these drawings on you?” he asked.

He spoke Nahuatl, the same language as the Aztecs, though his diction and accent were different from ours.

“I painted the ones on my loincloth.”

The question stumped me. I had never thought of why I had drawn them. I gave him the answer that came to my mind. “It’s what I see in the sky at night.”

“Where did you get these designs?” he asked.

The words were spoken almost in a whisper.

“I don’t know,” I told him, truthfully. “They were on me when they found me.”

“Dog People found you? Where? When?”

The nobleman stood up. “Do not hurt this one,” he announced to the warriors.

Suddenly I felt a chill, and a shadow fell over me. A startlingly tall, shockingly muscled warrior had come up beside me silent as the grave. Possessing a hawk’s nose, wide flaring cheekbones and blood-streaked shoulder-length hair, black as a raven’s underwing, he was an imposing specimen.

He wore the close-fitting loincloth and white padded-cotton shirt of a warrior, but his shield and helmet told me he was far more important than a mere commander of what appeared to be a small force—only eight soldiers plus the elderly nobleman. The warrior’s shield bore the image of a jaguar, and his headdress included the actual head of a jaguar as well as the brilliant green and red plumes of rare birds.

I had never seen an actual knight, but I knew from cooking-fire talk that the Toltec had three orders of knighthood: Jaguar, Eagle, and Coyote. The Coyote Knights were in charge of the Toltec forces that guarded its northern border, the one it shared with us Dog People. The Jaguar Knights guarded the king.

What was a Jaguar Knight doing so far from his king?

Who was this man?

Glancing up at him, I was surprised to find his eyes were . . . kind.

He was the man who had subdued my tormenter, Tenoch.

“What is happening, Citali?” he asked.

Additional Thoughts: After finishing the novel in a haze of confusion and anger (I wanted the apocalypse to happen, dammit!), I did a little research online. As it turns out, Gary Jennings (the credited creator of the novel) passed away in 1999. He was the author of the Aztec series (Aztec, Aztec Blood, Aztec Autumn, etc) which were very popular for the well-researched nature of the stories, and for the brilliant, unflinching nature of his writing. After his passing, Robert Gleason (Jennings’s former editor) and Junius Podrug (writer of fiction and nonfiction) decided to carry on the Aztec series. Apocalypse 2012 is their third book together.

I think this explains a whole lot.

Verdict: Poorly conceived, badly written, and without an apocalypse in sight, Apocalypse 2012 simply was not my cup of tea. Perhaps historical thriller fans, or those who have enjoyed Gleason & Podrug’s earlier efforts will enjoy this novel, but I cannot recommend it.

Rating: 4 Bad, but not without some merit – and this is a pretty generous rating.

Reading Next: The Awakening by Kelley Armstrong