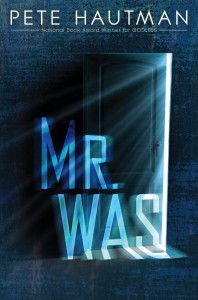 This involving tale of destiny, passion, and death takes teenager Jack Lund from the mysterious town of Memory, Minnesota, to the steamy jungle of World War II Guadalcanal to the sterile walls of a secret government asylum–all because of a strange metal door that changes the lives of all who pass over its threshold.

Why did I read this book: I loved Pete Hautman’s The Obsidian Blade so much that when I was in NY last week, I basically thought about buying ALL of his backlist. Due to the unfortunate restrictions of my suitcase allowance, I ended buying only two of his books and decided to read Mr Was straight away.

This is a book about Jack Lund’s life – as it is, or how it was or perhaps how it will be. In case you are wondering whether I lost my mind, Mr Was is a time travel story. It is crafted around 5 mysterious notebooks found in a briefcase lost at sea and it opens in chronological order (or does it?) with the first notebook. Jack is a 13 year-old boy, trapped in a home with an abusive, alcoholic father and a loving mother who wants to believe in the few redeeming qualities of her husband. It all starts when Jack and his mother travel back to Memory, her childhood town, to visit his dying grandfather. After his death, the family moves into the grandfather’s grand house where mysterious things have happened (or will happen). There, Jack finds a door that takes him 50 years back in time. At first travelling in time is nothing but a fun pastime until tragedy strikes Jack’s family in his own timeline and it becomes imperative that he goes back in time in order to prevent it.

To say more of the summary would unforgivably spoil the book and its many twists. Suffice it to say that in terms of plotting, Mr Was is as brilliant as any time travel book should be. Equally brilliant is its clever choice of narrative format as a presentation of these notebooks (written by Jack or mostly by Jack) as a journalistic-type of story constructed as fact. As awesome as the plot development and the narrative choices are though Mr Was truly succeeds when it comes to its main character and its thematic core.

Jack’s departure to the past effectively means leaving his own timeline for good but that is a sacrifice he is willing to make and is a good qualifier about his character and about how much his family means to him. Unfortunately for Jack, his temporal displacement is only the beginning of his troubles and there is a lot he goes through until he gets to the point he wants. It has to be said that there is a certain amount of predictability in the plot: because Jack’s time travelling is only temporal displacement (as opposed to time AND space), it is fairly easy to guess who, exactly, are the people that Jack is meeting back in time. The fun part is to be able follow him and see how it affects his life (and the lives of those he meets). I also LOVED how the author basically played around with the idea of the Grandfather Paradox.

I do use the word “fun” and “play” with a lot of caution. Because Mr Was is a freaking tragic book. Peter Hautman does not hold back from all the possible repercussions of messing up with time and he also does not pull punches when it comes to realistic portraying how time travel completely messes up the life of his main character. But Mr Was works not only as a mystery and as a thriller but also as a Contemporary YA work about a young boy and his family; and the portrayal of Jack’s family and their dynamics of abuse is painfully graphic and genuine.

Which brings me to Mr Was’s universal themes and how the author explores certain ideas. Can the past be changed? How about changing the future within one’s own timeline? Can things be altered? Can people change – Jack’s father’s promises of change are accepted wholeheartedly by both Jack and his mother but can that change happen without help? Are Jack and his mother wrong in trying to forgive the horrible abuse they suffer? How about love? Can a person control who they love or fall in love with? The proposition here is that all of it is irrevocable but is it really?

All that said, a few other things are worth mentioning. First of all, there is no explanation about the mechanics of time travel (how does the door work? Why? How come its time travel skills cover only batches of 50 years each time?) but I didn’t feel this deterred my connection to the novel. In fact, most of the best time travel stories for me are not those that necessarily explain how it happens but that brilliantly – like this one –develop what can happen once you do it. Secondly, Jack is a 13 year old boy who grew up in the 90s – as such he plays games, watches TV and he is really good with a Mac. He goes back to the 40s, and starts work as a farmhand and not once does he seem to feel the huge difference between the two timelines – he doesn’t seem to miss any of the 90s’ amusements a boy his age used to enjoy. Granted, he has a huge motivation for being in the 40s which could explain why he doesn’t feel the historical backlash. Still, the novel felt oddly lacking in that front.

Despite those minor criticisms, Mr Was is a thought-provoking, gut-wrenching, incredibly diverting time travel story. And it has cemented Pete Hautman as a new favourite author.

Chapter One: Meeting My Grandfather

The ringing woke me up.

I turned my head. The alarm clock’s glowing red numbers read 11:59. As the phone rang again, the red numbers changed to 12:00. So that is where we will begin, at midnight, February seventeenth, 1993. It was a long time ago but, as you will see, the memories are still bright and clear.

The phone went silent halfway through the third ring, and I could hear my mother’s low voice. I expected her to hang up right away, because a call in the middle of the night was almost certain to be a wrong number, but she didn’t. I heard my father grumbling about how was a guy s’posed to get a good night’s sleep around this dump. After a few moments I heard my mother hang up.

Everything was quiet for a few seconds, then I heard the shuffling, creaking sounds of someone quietly dressing.

Our rented house, a tiny two-story wooden house in Skokie with just the two bedrooms upstairs, was so small you always knew what everybody else was doing. I heard my parent’s bedroom door open. A bar of light appeared under my door. I heard footsteps on the tiny landing at the top of the stairs. I could tell by the sound that it was my mother, wearing her regular shoes, not her slippers. My door opened. I saw her framed in front of the brightly lit hallway.

I didn’t know what was going on, but I remember getting this feeling in my stomach like something bad had happened. She walked over to my bed and sat down and put a cool hand on my forehead. Mom always woke me up that way, with the hand on the forehead. I loved the way it felt—soft, firm, and comfortably cool.

I nodded, staring up at her silhouette, feeling my forehead move against her palm.

She knew I was awake, of course, but she always asked.

“Something has happened.” Her voice had a tightness to it, like the sound it had when she was too mad to yell, but this time there was no anger in it. There was something else.

“It’s your grandfather,” she said. “Your Grandpa Skoro.”

I thought I knew then what she was about to tell me, because I knew that her father, my grandfather Skoro, was getting very old, and his heart was going bad. He lived in a town called Memory, way up in Minnesota, and he was rich. I hadn’t seen him since I was a baby. My mother said that since my grandma had disappeared he’d turned into sort of a hermit and didn’t like visitors, especially kids. I didn’t remember him at all. Every few months Mom would drive up to see him. She said it was to make sure he had enough kipper snacks, rye bread, and corned beef hash. And to give him a chance to yell at her. She would always laugh when she said that.

I had always stayed home with Dad, who also liked to yell at her. While she was gone, Dad and I would eat a lot of pizzas and he would drink a lot of beer. He told me that Skoro didn’t care for our sort of company. Once when Dad was in a bad mood from drinking too much he told me, “Your grandfather is a cheap, mean, hard-hearted old miser. Well he can have his money. I hope he chokes on it.” I always remembered that, because when he said it he threw his beer bottle across the room and broke one of Mom’s favorite collector plates. He gave me ten dollars to tell her I’d been the one who broke it, and I did, but I think she knew I was lying.

Reading Next: The False Prince by Jennifer A. Nielsen