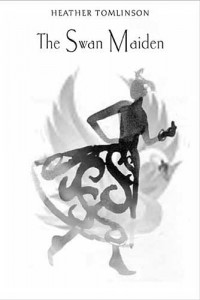 In the quiet hour before dawn, anything can happen. A third daughter can dream of being a creature of flight and magic, of wearing a swan-skin like her sisters. But Doucette must run the castle household while her older sisters learn to weave spells. Her dream of flying is exactly that–until the day she discovers her own hidden birthright.

Sudden, soaring freedom–it is a wish come true. Yet it comes with a price. As Doucette struggles to find her own way in the world, she risks losing the one she loves most of all.

An age-old fairy tale told in a refreshingly original voice, Heather Tomlinson’s stunning debut is fantasy at its most eloquent and richly imagined.

Why did I read this book: I’ve been craving a good retelling as of late – something romantic and lush, along the lines of Juliet Marillier’s Wildwood Dancing or Shannon Hale’s Books of Bayern. Yes, I know this is a tall order to fill – but when i saw this book sitting all alone on a shelf at The Strand, I was instantly intrigued by the cover, the synopsis, and starred reviews from Booklist and the like. I hadn’t heard of this book or author before, and then when I read it was a retelling of the French swan maiden/sorceress myth, I was absolutely hooked.

Dear Readers, I have a confession to make. As of late, I’ve been in something of a reading slump. I’ve read some good books, yes, but nothing that has truly swept me off my feet. When I saw The Swan Maiden, I was almost afraid to hope – maybe this would be the book to break me out of my slump.

And, dear readers, I am jubilant to report that not only did The Swan Maiden break me out of my reader’s malaise, but it also filled me with that rare kindling of excitement that only comes with the discovery of a new, potentially awesome author. I cannot believe that I had not heard a peep about this book or Heather Tomlinson (who has another book that came out silently last year) – and after scanning reviews on goodreads, I’m actually not surprised. The Swan Maiden is a very different type of fairy tale that dares to portray its heroine in a very different way. But before I get ahead of myself, first, the story:

Doucette is the third and youngest daughter of a Comte, but for all her high station she has always felt inferior, especially to her two elder sisters. While the cool, ebony-haired Azelais and the capricious, golden-haired Cecilia are both extraordinarily beautiful, what the (only plainly pretty) Doucette envies most is her sisters’ power – for both Azelais and Cecilia are Swan Maidens. Swathed in cloaks of feathers, able to don on and shed their swan skins, changing forms from swan to maiden at will, both of Doucette’s elder siblings are sorceresses in training and free to do whatever they please. Doucette, on the other hand, possesses no magical abilities, nor does she have any great beauty. Instead, she is trained by her mother in the traditional homekeeping arts of a chastelaine, so that one day she will be able to make a good match for a noble husband. To make matters worse, her sisters take great pleasure in playing magical pranks on Doucette, cruelly humiliating her at every opportunity. On the eve of their departure for further magical instruction, one such prank sends Doucette tumbling through the air and into the arms of Jaume, a local shepherd that Doucette secretly likes very much. Although deeply embarrassed by her appearance and by becoming yet again the butt of her sisters’ cruel sense of amusement, Jaume does not seem to care – and Doucette dares to hope that he returns her feelings for him.

But then, when Doucette helps her mother oversee preparations for a visiting Prince – who Doucette suspects is her intended husband – she discovers a rumpled cloak of soft dappled gray feathers. Her swan skin. Betrayed by her mother (who despises magic) but also exhilarated by the fact that she is a powerful Swan Maiden and can become a sorceress like her sisters, Doucette flees her home in search of someone to train her in the High Arts. But as time passes and Doucette grows more powerful, she must face the rage of her mother, and that of the jealous sisters who always thought of Doucette as a docile lamb, ready for slaughter. Even more importantly, as her beloved Jaume strives to win Doucette’s hand at marriage at any impossible cost, Doucette must make the hardest choice of all. True love? Or freedom and power?

See, the thing about The Swan Maiden, dear readers, is that it is a love triangle. It’s NOT the love triangle we are used to in this age of Twilight and Mortal Instruments and so on – rather, it’s a triangle in that the heroine, Doucette, must choose between the man that she loves (and who loves her back), or the seductive pull of her sorceress’s power and promise of absolute freedom. This is AWESOME. After perusing the reviews on GoodReads and Amazon, there seems to be a lot of ill-will towards this book, mostly focused on its third act, and I guess I understand that (especially given the rather commercial, predictable YA romances that dominate the market). But this unexpected twist – in which Doucette and Jaume do NOT immediately run off into the sunset together and live happily ever after – is precisely why this novel went from decently entertaining to something memorable in my opinion. Allow me to elaborate:

For the first half of the book, one aspect of The Swan Maiden progresses very much along a traditional vein – young pretty noble girl meets village boy; they fall in love but cannot be together; he tries to prove his worth and is successful with her help; they flee for marriage and race towards their Happy Ever After.

The other vein of The Swan Maiden is similarly traditional, in which – young pretty noble girl feels inferior and jealous of her sisters because of her lack of power but strives to live up to her mother’s expectations; girl learns she has been lied to her entire life and actually DOES have magical power; girl leaves to try and fulfill the dream of becoming a sorceress, while facing much ire from her family.

This, dear readers, is an interesting dilemma – and one that I think was handled brilliantly in the book. Because, more than anything else, for all that The Swan Maiden is a beautifully written book (resplendent with descriptions of medieval France, of magic and castles and swans), it is truly Doucette’s coming of age story. And instead of coming of age by falling in love and forgoing the freedom she has only so recently acquired on her own, she struggles with her doubts and makes her own decisions (whether those are right or wrong is irrelevant). I *LOVED* that a YA book – a romantic fantasy YA book! – goes this route. I won’t spoil the ending or what Doucette chooses, but I will say that it is so incredibly refreshing to see a teenage protagonist that is not bailed out of life or making tough decisions by a super awesome love interest.

While I don’t think The Swan Maiden is a perfect book, it’s certainly one of the best romantic fantasy YA titles I’ve read this year. Ms. Tomlinson has a beautiful knack for description akin to some of my favorite writers of romantic fantasy in the YA space (Shannon Hale is the immediate comparison that comes to mind), and though some of the pacing for the novel is a little off (and the ending a bit rushed), the actual story is wonderfully wrought. Although I wish Jaume could have been a bit more developed as a character (not unlike the way I felt about the Prince in The Goose Girl), I loved Doucette’s characterization, as she blossoms from quiet, underestimated young girl to powerful sorceress and the resulting complications along the way. And there is magic. Lots of magic. There’s even a well and a terrifying process of amassing power…but therein lie spoilers.

I truly enjoyed The Swan Maiden and wholeheartedly recommend it to fans of the genre – especially those who are not turned off (or those who are actually intrigued) by traditional fantasy with a little unconventionality.

Her fingers plunged into the feathers. Soft and warm, the swan-skin offered a silent promise.

Doucette crossed to the window, pushed aside the embroidered curtains, and stared out of the luxurious room that suddenly seemed a prison.

Over the years, Doucette had heard her father instruct her sisters’ escort. Like them, she could follow the sheep flocks to a lake in the mountains, then seek the lake’s eastern shore. The river Immeluse would lead her the rest of the way to her aunt’s castle, to a season of studying magic with Azelais and Cecilia. If she dared.

The wind kissed her cheek.

Doucette sat and took off her shoes. Her hose. Her gown, and the soft chemise underneath. Folding each item, she set it on the bed. The breeze gusted, stirring dried rose petals in a wooden bowl and raising tiny bumps along Doucette’s skin.

She took a deep breath and drew on the coat of feathers. Magic tingled the length of her body and down her spine. Her neck stretched, her legs shrank. Her skin exploded in feathers. The world spun around her as her vision took on a crystalline sharpness. The floor rose to meet her, then stopped with a jolt.

She was a swan.

Additional Thoughts: There is nothing I love more than discovering a new author – and though The Swan Maiden is Ms. Tomlinson’s first book, I was thrilled to see that she has a second novel available now! And the cover is gorgeous, and the book sounds lovely – another fairy tale retelling, this time of Charles Perrault’s “Les Fees” (“The Fairies”), against the backdrop of precolonial India: 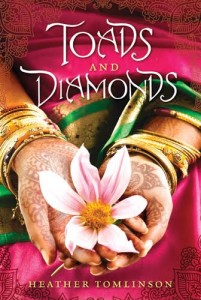 Diribani has come to the village well to get water for her family’s scant meal of curry and rice. She never expected to meet a goddess there. Yet she is granted a remarkable gift: Flowers and precious jewels drop from her lips whenever she speaks.

It seems only right to Tana that the goddess judged her kind, lovely stepsister worthy of such riches. And when she encounters the goddess, she is not surprised to find herself speaking snakes and toads as a reward.

Blessings and curses are never so clear as they might seem, however. Diribani’s newfound wealth brings her a prince—and an attempt on her life. Tana is chased out of the village because the province’s governor fears snakes, yet thousands are dying of a plague spread by rats. As the sisters’ fates hang in the balance, each struggles to understand her gift. Will it bring her wisdom, good fortune, love . . . or death?

Doesn’t that sound freaking AWESOME?! How have I not heard of this before? How has Heather Tomlinson completely flown under my radar?

Reading Next: The Dragon’s Path by Daniel Abraham