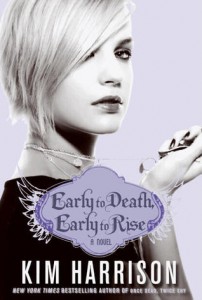 Seventeen, dead, and in charge of heaven’s dark angels—all itching to kill someone.

Madison Avery’s dreams of ever fitting in at her new school died when she did. Especially since she was able to maintain the illusion of a body, deal with a pesky guardian angel, and oh yeah, bring the reaper who killed her to his untimely end. Not exactly in-crowd material. It’s amazing that her crush, Josh, doesn’t think she’s totally nuts.

Now Madison has learned that she’s the dark timekeeper, in charge of angels who follow the murky guidelines of fate. Never one to abide by the rules, she decides it’s time for a major change to the system. With the help of some unlikely allies, Madison forms a rogue group of reapers who definitely don’t adhere to the rules of the heavens.

But as she grapples with the terrifying new skills that come with being a timekeeper, Madison realizes she may not be prepared for what lies ahead—unless she gets some seriously divine intervention.

Why did I read this book: Are you kidding me? I *love* Kim Harrison. Her ridiculously fast-paced and action-crammed books are insanely addictive – it’s for that reason that the Rachel Morgan/Hollows series is among favorite UF series’. And, I am ecstatic to report that her YA books, following a dark time keeper named Madison Avery, fits the same mold. I loved Once Dead, Twice Shy, and could not wait for this second book.

Seventeen year-old Madison Avery has the job of a lifetime – well, several lifetimes. Tricked into a state of dead limbo with her human body nowhere to be found, Madison has inherited the role of Dark Timekeeper – that is, she is one of two diametrically opposed humans with the power to discern the fabric of time. As Dark Timekeeper, Madison technically works on the side of “Fate”; her job is to identify “marks” and to scythe their souls before they commit whatever heinous evil deeds they are destined to commit. At every step of the way, the Light Timekeeper will try to thwart her efforts, as they believe in the power of human choice (even if those choices lead to mass murders or other atrocities).

But here’s the rub – Madison might be working on the side of Fate, but she believes in the power of choice, too. Dedicated to make a difference and to find a balance between the two opposed ideals, Madison will try to find a different way to deal with “marks” (that don’t involve giving them a ‘get-out-of-death-free’ card in the form of an infallible guardian angel like the Light Timekeeper would do, or preemptively scything – killing – the mark’s soul). Madison’s first official mark as Dark Timekeeper is the biggest test of her young (un)life. Not only does she have to find her target before ruthless Light Timekeeper Chronos does, she also has to convince the mark to change his mind about committing his crime AND she’s got to do it working with two angels that just can’t get along, Barnabus (a “fallen” light angel for his trust and belief in Madison’s desire to change the way things are done) and Nakita (a dark angel that has become something…more, because Madison allowed her to experience true, mortal fear).

This second full-length Madison Avery book is, in a word, fantastic. Kim Harrison is at her best with this engaging and surprisingly thought-provoking series. While Madison’s personal life (and death) was much of the fun, lighter impetus behind the first short story and the first novel, in Early to Death, Early to Rise, things take a more serious, thematic-centric turn. One thing I love about Kim Harrison’s books (both her fantasy novels and in her Hollows series) is how she builds upon prior storylines and expands her universes with each additional novel in the series – and Early to Death, Early to Rise continues in this tradition. In Once Dead, Twice Shy, we learn that there is an ancient game, a realm of angelic interference beyond our human perception, run by two opposing sides – Light and Dark (not to be confused with “Good” and “Evil” or “God” and “The Devil” or anything nearly so simplistic). In Early to Death, Early to Rise, this division is examined more closely, and the lines and roles of the Light and Dark timekeepers become wonderfully blurred. At this novel’s heart is the age-old dilemma: Free Will or Fate? (In the huge gaping maw that the absence of LOST has left in my life, I have an even larger appreciation for books that try to tackle this dichotomy) Ms. Harrison handles the question effortlessly, avoiding some simplistic black or white answer for a combination of the two in shades of gray where destiny and choice mingle and coexist. In addition to the thematic depth, there’s also an expansion on Madison’s story – just how she became Dark Timekeeper (Chronos’ intervention) and what her limitations are since she’s not exactly alive anymore. There are some interesting developments, and underlying the larger, central storyline, there are Madison’s doubts about being able to actually do this job, and the slow-simmering plot seed of her need to find her human body and become fully alive again.

Madison’s character goes through a lot here in this second book, developing and growing as a heroine. She struggles to find balance in a world set on polarized opposites, and she learns that while something sounds great in theory, putting compromise into practice is a much harder thing to do. There are also smaller, quieter moments in this book that won me over – there are moments of lightheartedness intermingled with sadness, lending a genuine quality to Madison as a narrator and a real person. Her inability to eat, for example, is wistful and funny – but it also means that Madison has to continue lying to her father (she can’t exactly out and tell him her body is a corporeal one, and as such she cannot eat food). Little things like that.

As for the other characters, they too grow and change – which is a big deal for immortal, supposedly immutable characters. Barnabus has undergone the most dramatic shift, falling from Chronos’ right hand man to join Madison’s quest (and seriously, who doesn’t love Barnabus?!), but Nikita makes an awesome sidekick here. My only minor criticism of the characters are how familiar a few of them are. Nikita is SO Ivy and Grace reminiscent of Jenks (for those of you that have read the Rachel Morgan books), but does it matter when I love Nikita’s dark, tortured edge or Grace’s awful limericks? I’m willing to overlook those similarities because, well, these characters are so damn compelling anyways. Even the singleminded Chronos (ahem, Trent Kalamack?) works wonderfully because of how convinced he is that his way is the ONLY way. In fact,the only character that took a backseat here was that of Madison’s would-be boyfriend, Josh. But…that’s ok, because not everything has to be a love story (at least, in my mind, it was perfectly cool).

Overall? Early to Death, Early to Rise is yet another winner from Kim Harrison – even better than Once Dead, Twice Shy, and with tantalizing implications for the future. I cannot wait for the next book! Absolutely recommended.

Notable Quotes/Parts: Thanks to Harper Teen’s Browse Inside feature, you can read the first 70 pages of Early to Death, Early to Rise for free! Check it out:

Additional Thoughts: I am a sucker for extras, so check out the trailer:

Also, this year Harper Teen returns to its “Supernatural Summer” event – including book tours, giveaways, and a TON of awesome extras. I highly recommend you check it out, along with some of their other exciting YA titles.

We have TWO copies of Early to Death, Early to Rise up for grabs! The contest is open to residents of the US and Canada ONLY, and will run until Saturday July 31 at 11:59 PM (PST). To enter, simply leave a comment here letting us know where you fall on the spectrum – Light Timekeeper (choice?) or Dark Timekeeper (fate). ONLY ONE ENTRY PER PERSON – multiple entries from the same IP address will be disqualified. Good luck!