Book Review: What We Keep Is Not Always What Will Stay by Amanda Cockrell

Welcome to BEA Appreciation Week 2011! As is our annual tradition, this week we bring you reviews of some of the titles we have scooped up at BEA, as well as some general news and ponderings concerning the trade show and affiliated conferences. 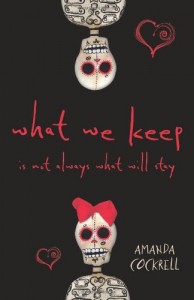 Title: What We Keep Is Not Always What Will Stay

Genre: Contemporary YA (with a side of Magic Realism)

Fifteen-year-old Angie never used to think much about God—until things started getting weird. Like the statue of St. Felix, her secret confidante, suddenly coming off his pedestal and talking to her. And Angie’s mother, who’s busting up her third marriage for no apparent reason. Then there’s Jesse Francis, sent home from Afghanistan at age nineteen with his leg blown off. Now he’s expected to finish high school and fit right back in. Is God even paying attention to any of this?

Against the advice of an increasingly vocal St. Felix (who knows a thing or two about war), Angie falls for Jesse—who’s a lot deeper than most high school guys. But Jesse is battling some major demons. As his rages start to become more frequent and unpredictable, Angie finds herself losing control of the situation. And she’s starting to wonder: can one person ever make things right for ‘someone else?

How did I get this book: I was visiting Flux’s booth at BEA and told them I was really looking forward to reading it and since they had a couple of copies left (it was the last day at BEA), they generously gave me one.

Why did I read this book: I saw it a few months ago at Goodreads and the cover immediately caught my eye and when I read the blurb I thought it sounded good and added it to my radar that week.

15 year-old Angie favourite’s confidant is the statue of St. Felix down at the basement of her Church. Since she was nine, she’s been sharing her thoughts about her life, her troubles and more recently about her difficulty in accepting that her mother wants to divorce her beloved step-father Ben, whom she’s been living with since her mother moved out. Then, one day, to her dismay, the statue comes to life and starts talking back to her – is this really St Felix, or just a homeless guy who had been living in the basement all this time? If so, where is the statue?

Meanwhile, a new guy shows up at school: 19 year-old Jesse Francis, back from the war in Afghanistan, scarred for life, suffering of Post-Traumatic Stress Disorder and trying hard to fit back into normal life. Against the advice of close family and friends, Angie feels she can help Jesse but then things get really complicated when his symptoms worsen.

Reading this book was a strange experience. I was very close from setting it aside many times but felt strangely compelled to go back to reading it. I finished it, and I somewhat enjoyed it but feel that the reasons for wanting to put it aside are too strong to be dismissed even if the ideas presented in the book are interesting.

The majority of the problems I had stem from the writing, the prose itself and the manner which the ideas were conveyed. The first relates to the weirdly abrupt way that the narrative kept alternating between past and present tense. For example, in one paragraph, Angie could be speaking in past tense about what was happening right now as well in present tense and change from “I remembered” to “I am mad”. Similarly the passage of time is represented by sudden breaks in the story. At one point, Angie is talking to St Felix about her parents, then there is a break starting with “A week later….” and the next paragraph starts with “And then, the next day, Mom moved out” and that drove me to distraction as I kept trying to find my place in the story (where is the story at this point? Next week or the next day following the previous paragraph?) and I was very close to put the book down. What prevented me from doing so was the fact that my copy is an ARC and I wanted to be fair considering that the final copy might have had further edits to provide a more polished writing. Not only that: the story itself was compelling.

Angie is a great character: imbued with a strong independent mind, setting out to explore her own ideas of what is right or wrong. She knows that she likes her step-father Ben for example and why she likes him. She is moved to help Jesse even though people tell her that she might be getting in way over her head because of their age difference and the different places they are in life. She is also open to listen to people as well as argue with them. One of her strongest beliefs is that she is entitled to have an opinion and she shouldn’t fear voicing them for any reason. This comes into play later in the story when Jesse starts to show a more controlling nature and a temper and Angie – so young – had to deal with that. Her first impulse is to shut up but then she realises she can’t do that. She can’t allow herself to be second to his needs, even if he is going through a really terrible time in his life.

I appreciated how the author tackled issues like the beginning of a potentially abusive relationship and the horrible effects that War have in the lives of people – those who go, those who stay. There is also a great exploration of need and compassion, and how relationships shouldn’t be based on neither. How one person can not really change another, or how powerless one can be with regards to other people’s lives. That is something that Angie had to face not only in her relationship with Jesse but also by having to step aside and not interfere with her parents’ problems. Another thing I truly enjoyed, was reading about Angie’s family and their religious believes. She is surrounded by both Catholics and Jewish grandparents and I thought that the dynamics of everybody’s relationship was not only interesting but also very respectful of all points of view. Angie herself is probably more inclined towards being a Catholic which might explain her tremendous difficulty in accepting her mother’s decision to divorce. At times, I felt that her lack of sympathy for her mother’s needs was uncalled for but I can’t really say that Angie doesn’t question some of the religious aspects that she is presented with. This tactful questioning of religion and God is definitely one of the things that kept me going back.

However, even though I really appreciated those things, even though I agree with the majority of the thoughts brought forward like for example Angie’s right to be independent and opinionated; the anti-war sentiment; the respect for all religions, I need to go back to how these ideas were conveyed. Sometimes it felt really like I was sitting down reading life-lessons and some of the conversations within the book were rather didactic and heavy handed to the point where a real connection with the story and the characters was simply impossible.

Overall, I kept reading in spite of rather than because of and I think that this is not a good foundation for a good relationship with anyone or anything, not even a book.

I am not a religious fanatic. I want to say that right off. It’s just that ever since I got lost looking for the bathroom at church when I was little, and found a statue of St. Felix down in the basement, I’ve talked to him.

Reading next: One Crazy Summer by Rita Williams-Garcia