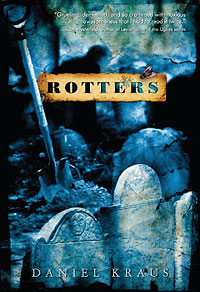 Grave-robbing. What kind of monster would do such a thing? It’s true that Leonardo da Vinci did it, Shakespeare wrote about it, and the resurrection men of nineteenth-century Scotland practically made it an art. But none of this matters to Joey Crouch, a sixteen-year-old straight-A student living in Chicago with his single mom. For the most part, Joey’s life is about playing the trumpet and avoiding the daily humiliations of high school.

Everything changes when Joey’s mother dies in a tragic accident and he is sent to rural Iowa to live with the father he has never known, a strange, solitary man with unimaginable secrets. At first, Joey’s father wants nothing to do with him, but once father and son come to terms with each other, Joey’s life takes a turn both macabre and exhilarating.

Why did I read this book: I saw this book recently at The Strand and was immediately drawn to the title. Rotters – it’s a fantastic name for a macabre story, isn’t it? Add to that the author blurbs from Guillermo del Toro and Rick Yancey, and my heart was all a-flutter with anticipation. And THEN, literally the day after I bought the book, the author contacted us about a review. Kismet.

A quiet, unobtrusive teen, Joey Crouch has lived a thoroughly average and normal life. When his mother is killed by an errant bus in an accident, however, Joey’s routinely mundane world is shattered. Sent from Chicago to live with his stranger of a father in the middle of nowhere, Joey’s new reality is anything but ordinary. Not only is his father taciturn and disinterested, and not only do the noxious fumes that reek from his pores and his home begin to rub off on Joey, but the teen quickly discovers that his newfound father is local anathema. Called the “Garbageman” for his occupation and permanently rancid odor, Joey’s father is also a suspected thief – and Joey has inherited not only his father’s unpleasant stench, but also his reputation. From a happily overlooked teenage boy in Chicago, Joey becomes the subject of merciless bullying from both his peers (who ingeniously rename him “Crotch”) and certain faculty members.

And then, Joey learns what his father’s real job is. Part of what he believes to be an important and ancient tradition, the elder Couch is a grave robber, making his money on the valuables buried with the dead. And Joey, with nowhere else to turn, with no friends or other family, decides to follow in his father’s footsteps and willingly learns his macabre trade.

The second novel from Daniel Kraus, Rotters is ostensibly a Young Adult book, but in truth is a very mature and dark affair. Part teenage misfit/coming of age story (albeit via a much darker avenue than the usual self-discovery tales), part atmospheric, grave-robbing secret-society yarn, I loved the idea of this novel, especially with its potential focus on such an old, ethically contentious tradition. Elements of Mr. Kraus’s novel were near flawless, in particular the emotions of protagonist Joey, his struggles in school (what with becoming a social pariah and all), dealing with the grief of his mother’s death, and his father’s bizarre sense of paternal investment. Daniel Kraus’s writing style is at turns poignant and insightful, especially at the onset of the novel with Joey’s keen sense of observation (or his tendency to categorize minutia) and narrative voice. The descriptions within Rotters, too, of bloated bodies, wriggling maggots, and unwashable stenches are fabulously detailed – as are nuggets of unforgettable wisdom throughout the book (such as how to escape from being buried alive in a wood or metal casket, or what exactly “coffin liquor” is) that I enjoyed immensely.

That said, these disparate pieces that make up wonderful elements of Rotters do not translate to a cohesive, effective whole. To stick with the morbid Shelley-esque imagery, these stolen limbs, though hewn adroitly enough, lack that essential spark that would bring to life a modern prometheus. Though atmospheric and descriptive, Rotters has the tendency to drag on without accomplishing anything to advance the story – the first half of the book (no small amount, as the novel comprises a sizable 450+ pages) plays out with the same ideas, namely Joey’s status as an outsider at school and his initiation to the grave-robbing world, without any real plot or central conflict developing. Though these scenes were well-written in terms of style and descriptive prose, the overall effect was as bloated as some of the corpses Joey and his father unearthed – lifeless and splendidly grotesque, but ultimately devoid of life or deeper meaning.

The most disappointing thing about Rotters in my opinion was how there are these hefty potential issues that could have led to fascinating discussion of moral, ethical considerations, but were sadly overlooked. Joey learns that his father desecrates the graves and bodies of the dead for profit – and yet…he has no problems with that. Later in the book, too, Joey metes out his own special brand of vengeance on those who have terrorized him, and again, these hefty moral issues of retribution are completely ignored. The overall result is that Rotters feels strangely hollow, and for all its gruesome glory, it lacks the soul that would have made the book truly memorable. There are elements of some of my favorite films and literary gems in Mr. Kraus’s writing – echoes of Will Henry and the Monstrumologist, of Victor Frankenstein and his hubris, of the bleak terror of Poe, and the black hilarity of Raimi. I truly wish Rotters could have lived up to that potential. Unfortunately, for me, it simply wasn’t meant to be. That said, mine seems to be a minority opinion – and I do urge everyone to read this novel in order to form their own interpretations.

Notable Quotes/Parts: From Chapter 1 (I wish I had an excerpt of the prologue, which is truly awesome):

My father’s name was Ken Harnett. I was told by my caseworker from the Department of Children and Family Services that she had tracked him down in a small town in Iowa not far from the Mississippi River, not even five hours away from Chicago. My caseworker, a young woman named Claire, was proud of the discovery. When she had told me after my mother’s funeral that she was giving top priority to the search, it had sounded like one of those things she was required to say. I think I nodded and maybe even smiled. It never occurred to me that Claire would succeed. I don’t think it occurred to her, either.

I tried to imagine what he looked like; I subtracted my mother’s features from my own. The exercise was not only futile, it was boring. I didn’t care. He was not real, at least not to me. Even the name felt fabricated. My last name was Crouch. I knew no Harnetts and had never met anyone named Ken. Such thoughts compelled me to fish out my passport and consider the moronic face staring back at me. I’d had the passport all my life, a childhood gift that made little sense; perhaps there had been a time when my mother had fantasized that we might leave the confines not only of the city but of the country as well. Over the years, I had taken it upon myself to renew the passport as a personal promise that I would not turn out like her, that one day I would see the world, any world. If I used it now, right now, maybe I could escape this faceless father.

Claire was assigned to my case the same day that my mother went under all eight wheels of the bus. Death was instantaneous, though the paperwork wasn’t signed until about noon. Around dinnertime, the intercom buzzed and I asked who was there and it was a woman’s voice that was not my mother’s. Our speaker was crap, so I went downstairs to see who it was and it was a pretty Asian girl with a pixie cut and purple fingernails, possibly still in her twenties, and suddenly it didn’t matter if she was homeless or a Jehovah’s Witness or planned on pressing a knife to my throat. All I could think of was how stupid I looked with my Kool-Aid-stained tee and pleated shorts. Not that my attire mattered much: I was short and scrawny and not anyone people spent time looking at, and I knew I was kidding myself that this female, any female, saw me as anything but a blur of pimpled flesh and uncooperative brown hair. “Your mother has died,” she said. She said it before introducing herself, and I couldn’t help considering my reaction almost abstractly. There was an attractive young woman at my door; masculine protocol required that I not cry. It was tough, and got tougher as the night progressed, and I found myself wishing that Claire were less cute, much older, and had, for instance, a mustache.

Claire attended the wake and the funeral. I guess it was part of her job. My best friend, Boris Watson, met her for the first time there, and was as disheartened as I by her inappropriate good looks. The two of them shook hands, her grip businesslike and warm, his limp and humiliated, and I realized that, with my mother gone, this mismatched pair was all I had left. It did not bode well that their handshake was short, their conversation strained and doomed.

The service took place at our usual church with our usual pastor–my mother had taken me there almost every Sunday of my life. I don’t know who arranged the funeral details and chose the casket or where exactly the money came from to pay for the service and flowers. Claire surely knew; maybe Boris knew, too. I was steered around, sometimes literally by the shoulders, from a hospital morgue to Boris’s living room to a dreary Italian restaurant and back to Boris’s, and on and on until it was two days later and there was my mother in her casket. I first caught sight of her face from the corner of my eye and it was like noticing someone you didn’t expect to see. Behind me, Boris and the rest of the Watsons kept their distance. The funeral home doors would remain closed for another twenty minutes; this time belonged solely to the family, and that meant me. Red carpet led me to her. She was fantastically still and her cheeks lay unnaturally flat. On those cheeks was far too much makeup–the only freckles I could see were in a patch below her throat.

Additional Thoughts: We are still giving away a copy of Rotters to one reader – make sure to check out Daniel Kraus’s excellent guest post and enter while you still have the chance!

Rating: 6 – Good, recommended with reservations – even though the book didn’t work for me personally, there’s some good stuff here, and maybe the things that bothered me won’t bother others.

Reading Next: The Company Man by Robert Jackson Bennett