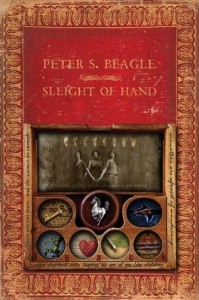 Abundant with tales of quiet heroism, life-changing decisions, and determined searches for deep answers, this extraordinary collection of contemporary fantasy explores the realms between this world and the next. From the top of the Berlin Wall to the depths of the darkest seas, gods and monsters battle their enemies and innermost fears, yet mere mortals make the truly difficult choices. A slightly regretful author and a vengeful-but-dilapidated dragon square off over an abandoned narrative; the children of the Shark God demand painful truths from their chronically absent father; and, a bereaved women sacrifices herself to change one terrible moment, effortlessly reversed by a shuffle of the deck. Whether melancholic, comedic, or deeply tragic, each new tale is suffused with misdirection and discovery, expressed in the rich and mesmerising voice of a masterful storyteller.

Stand alone or series: This is a collection of short stories and all of them can be read as standalone.

Why did I read this book: I always wanted to read Peter S. Beagle and thought this could be a good introduction to his work.

OK, so. Deep breaths. This is my first real foray into the works of Peter S. Beagle[1. I only read one of his short stories before in

There are 13 short stories in this collection, the majority of them already published elsewhere. There isn’t really a theme that connects all stories beyond the fact that they all have fantasy elements to one extent or another. However, quite a few of them figure families and complicated relationships so if you wish for a theme, this should be it. Also, added bonus: each story opens with an interesting introduction by the author revealing a lot about the writing process and inspirations for each story.

“The Woman Who Married the Man in the Moon” opens the collection. It is a story that figures the wizard Schmendrick, which is, I learnt, a well-known character from the Last Unicorn universe. The story reads as a standalone though and I didn’t feel that the lack of previous knowledge was detrimental to my reading. This was a bittersweet tale about a lost, wandering wizard coming across a family of two siblings and their single mother. There is a fleeting connection between the characters and an exchange of stories (or fables) that illustrate their hopes and dreams.

“Sleight of Hand” which gives name to the anthology, is the next one and it’s another bittersweet tale featuring a young woman who has recently lost her husband and daughter in a tragic accident and is invited to accept a Faustian offer. The story deals with grief, life and death and memory – not to mention a surprising twist to the Faustian bargain.

The next one up is “The Children of the Shark God”. The Shark God falls in love with a young woman, marries her and they have twins. He only ever visits his family once every year when he collects the tribute from their island. He only ever sees the twins when they are asleep and the two grow up basically fatherless until one day their mother tells them the truth and the daughter sets out to find their father. This is a great story with fierce characters and an interesting exploration of the relationship between Gods and humans.

“The Best Worst Monster” is perhaps the funniest, quirkiest (also the shortest) of the bunch as a Frankenstein-type monster is created by a master to bring havoc and exact revenge on those that he despises but then all of a sudden, the bad, bad monster develops a conscience.

“What Tune the Enchantress Plays” is another story set in one of the author’s established worlds (Innkeepers) and as before my lack of previous knowledge about the world did not prevent me from enjoying this story at all – it is in fact, one of my favourites in the collection. It deals not only with the relationship between a mother and a daughter, both powerful sorceress in their own way but also with the romantic relationship between the daughter and a childhood friend. It is a mixture of love story and coming of age and I loved it.

“La Lune T’Attend” follows and it is a story about werewolves, Creole culture and vengeance. It features two childhood friends dealing with the aftermath of a terrible thing they did in the past which in turn, was a reaction to another terrible act committed against one of their loved ones. Another good story and the darkest, saddest and most violent one.

Thankfully, it is followed by another light story, “Up the Down Beanstalk: A Wife Remembers” in which the wife of the giant from “Jack and the Beanstalk” tells her side of the story. It is darkly humorous and totally delightful. Also delightful is “The Rock in the Park” : semi-autobiographical, it features a young Jewish boy and his friend who come across a family of Centaurs and must help them getting around.

And then there was “The Rabbi’s Hobby”, my absolute favourite. It follows another young Jewish boy as he is getting ready for his Bar Mitzvah. His weekly meetings with his Rabbi are a chore but it suddenly becomes interesting when both the Rabbi and the boy become entranced by a model in the cover of an old magazine. The duo proceeds to investigate who that model is, which takes them into an unexpected journey. This is a story about friendship, about understanding of what it means to be an adult, about Bar Mitzvahs, coming of age as well as a Mystery and at the centre, the beautiful-sad story about a family and their tragedy and how to move past it. It is spellbinding.

“Oakland Dragon Blues” is about a policeman called to clear a traffic jam only to find that what is blocking the road is an honest to god, real-life dragon and they go in search of the writer who wrote him into the world. A poignant tale about storytelling itself.

“The Bridge Partner” is about a woman whose new bridge partner whispers to her, at every opportunity “I will kill you”. Is the woman making it up? Is it all in her imagination? Or is the threat real? This is one is an excellent character driven, psychological thriller.

“Dirae” is different in form as well as content. It begins rather unexpectedly taking the reader AND the character by surprise. It is about a warrior who appears out of nowhere to save people in danger and who seems to be undergoing an awakening – in every sense. This is another favourite in its brilliance exploration of heroism. “Vanishing” closes the collection with a Ghost story that transports its main characters from the future back to the Berlin Wall of the sixties to solve a mystery. It is a fitting story to end the anthology with.

Having read this collection, it is easy to understand why the word “master” is used to describe the author. I love his writing: all of these stories are extremely well-written. But all of them go beyond the mere veneer of excellent prose: they feature great stories with great characters and all of them, really, ALL of them evoked an emotional response from me. If this is an example of what the author can do in the confines of short stories, I suspect my mind will be blown away by his full length books.

I guess I should probably read The Last Unicorn soon?

Notable Quotes/Parts: A bit from the story “The Best Worst Monster”:

The monster didn’t know much, being only two days old, but he knew that he didn’t like how he was feeling. He wondered if there was something wrong with him.

Monsters are afraid of wondering, so when morning came he went to his master and said, “Something is happening to me. I don’t know what it is, but it frightens me. Maybe you ought to order me to build something today—just for the change, just until this feeling goes away. I’m sure it will go away.”

His master was horrified, and very angry too. “I can’t believe this!” he screamed at the monster. “Are you growing a soul in that unspeakable patchwork body of yours? Well I’ll take care of that, and right now!”

Whereupon he sprayed the monster from horns to claws to antennatipped tail with a nasty-smelling mixture called “SoulAway,” which he had invented himself for just such occasions. After that he opened up the monster’s intake valves and poured in gallons of another potion called “SoulBegone.” Then he fed the monster an enormous pill that didn’t have a name, and which stuck in the monster‘s throat. He had to climb up on a tall ladder and pound the monster on his back until it went down.

Reading Next: Darkness Becomes Her by Kelly Keaton