Today, Thea continues with the Vatta’s War books, with a review of book 2 in the series, Marque and Reprisal! 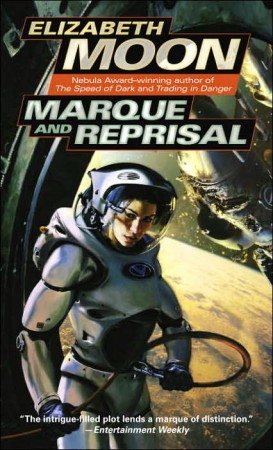 The exciting military career she hoped for never got off the ground–but Ky Vatta ended up seeing plenty of combat when she took the helm of one of the commercial transport vessels in her family’s fleet . . . and steered it into a full-blown war. Now the lessons she learned in that trial by fire are about to pay off: because this time, the war has come to her. To be exact, someone unknown has launched a full-throttle offensive against Vatta Transport Ltd., Ky’s father’s interstellar shipping empire. In short order, most of Ky’s family is killed, and subsequent attacks sever vital lines of communication, leaving Ky fighting, in every sense, to survive.

Determined to identify the ruthless mystery enemy and avenge her family’s name, Ky needs not only firepower but information. And she gets both in spades–from the band of stranded mercenaries she hooks up with, from her black-sheep cousin, Stella, who’s been leading a secret life, and from Stella’s roguish ex-lover, Rafe. Together they struggle to penetrate the tangled web of political intrigue that’s wreaking havoc within InterStellar Communications, whose effective operation their own livelihoods–and perhaps lives–depend on.

But the infighting proves to be infectious, and it isn’t long before Ky’s hired military muscle are turning their suspicions on the enigmatic Rafe, whose wealth of knowledge about ISC’s clashing factions and startling new technologies has begun to make him smell like a rat . . . or a mole. With swift, violent destruction a very real possibility, the last thing Ky needs is a crew divided against itself–and she’s prepared to take whatever measures are necessary to ensure that Vatta stays in business, as well as in one piece.

What she’s not prepared for is the shocking truth behind the terror– and a confrontation with murderous treachery from a source as unexpected as it is unrelenting.

Standalone or series: Book 2 in the Vatta’s War series

Why did I read this book: I’ve had the Vatta’s War series on my TBR for YEARS, and only recently read Trading in Danger a few Wednesdays ago. From the first taste, I was hooked on Kylara Vatta and could not wait to dig in to book 2. (Not to mention, I’ve been on a military SF kick as of late!)

Ky Vatta’s had a rough couple of weeks. After getting kicked out of the Slotter Key military academy (despite her exemplary record as a cadet), Ky was forced to join in the very lucrative family business of interstellar trade. It’s not all doom and gloom, though – Ky is awarded her very own ship, the Gary Tobai, to command. Even if it’s a one-way mission to bring the ship in for scrap metal, it’s still Ky’s command (of course, she harbors her own ambitions and plans to save the ship and keep it under her command). After surviving her ship’s inadvertent involvement with mercenaries and a war, Ky and her crew have barely made it to port when they receive devastating news.

Someone has targeted the Vattas, and so many of Ky’s relatives have been killed in a coordinated attack of impressive and unprecedented scale. Vatta Transport Ltd. has instantly become persona non grata, everywhere – accounts are frozen, credit is denied, and the entire Slotter Key government has turned on the most successful commerce fleet in the galaxy.

Desperate for information and ship upgrades that will offer her crew protection and firepower, Ky uses all her resources to keep the Vatta business – and few remaining family members – alive. With the help of her supposedly flighty (but actually ruthlessly intelligent) cousin Stella and a covert-ops Slotter Key spy named Rafe, the ragtag crew of the Gary Tobai searches for answers, and for revenge.

The second book in the Vatta’s War series, Marque and Reprisal picks up immediately after Trading in Danger ends, and throws Ky back into the thick of action with nary a respite. I mean, the book begins with a literal bang – Ky’s immediate family is taken out in a single coordinated attack, leaving Ky, her cousin Stella, and teenage Vatta nephew Toby stranded and without recourse. Thanks to Ky’s military training (and thanks to her Aunt’s diamonds smuggled in fruitcake – yes, you read that correctly), the Vatta business and family line has a chance at surviving the war that has been waged upon them. Like the first book in this series, Marque and Reprisal is an action-packed read, complete with zero-g combat sequences, exploding ship mines, stratagems, and intrigue. In fact, the action and the twists in this second book are far superior to those in Trading in Danger, because the stakes are that much higher with Ky’s family facing complete obliteration from well-funded, well-organized parties unknown.

Luckily for us, and for Vatta Transport, Ky has gumption and smarts in spades, not to mention she has an ace in the hole. That is, she possesses an honest-to-goodness Letter of Marque:

Ky looked back at the letter. In archaic and complicated language, it authorized her, Kylara Evangeline Dominique Vatta, to seek out and impede, harrass, annoy, frustrate, confiscate, attack, and destroy any and all enemies of Slotter Key wheresoever she might find them, in space or in dock, by any means whatsoever that lay within her power, and further instructed officers of Slotter Key, diplomatic, military, and “affiliated,” whatever that was, to assist her in these endeavors.

In other words, Ky and her crew? They’re pirates. Well, Slotter Key-sanctioned pirates, therefore “privateers.” Ky doesn’t actually use her Letter of Marque – yet. But it helps to know that she has the ability to do whatever she needs to do without fear of reprisal.

Suffice it to say, on the plotting and continuity front? Marque and Reprisal is pretty freaking awesome.

But the real attraction to this series lies with its characters – in particular, with its leading lady Ky Vatta. In book 1, I admired Ky’s analytical nature and her ability to think before acting. At the end of Trading in Danger, Ky is no longer a green, fresh-faced captain – she has commanded her first ship, she has led her crew through an incredible crisis completely on her own skill and know-how, and, most importantly, she’s killed for the very first time. This second book builds on this older, wiser Ky – a Captain who struggles with the primal rush she feels after taking life. This is Ky’s headspace when the novel starts, and a struggle she faces internally throughout the book – one that is only exacerbated as she faces the extinction of her family line and brutal aggression. The thought-provoking question in this book that Ky grapples with, though, is simple: if there wasn’t a dire threat to her family, if she wasn’t out for vengeance, would she still enjoy killing as much as she does? (I think she would, for the record.) There’s a very dark side to Ky, and it’s seen in a climactic violent showdown with a traitor who has betrayed the Vattas – someone she eviscerates, gleefully. Which is… well, dark. And while it’s disturbing to read in a heroine, I appreciate Ky’s questionable morality and the ramifications this will inevitably have in future books.

In this second book, we also are introduced to a few new characters, my absolute favorite of which is Stella. OH STELLA, I really, really like you. I confess that when I first read the change of narrative, following you instead of Ky and the Gary Tobai, I was annoyed – but you quickly won me over with your smarts, your competence, and the way you hide behind a mistake you made as a teenager as the perfect cover for said smarts and competence. Stella is really cool, guys, and I truly hope there’s more of her in a major role in the future books. Also on the new character front, Rafe is also a welcome addition, cliched as the rogue with a heart of gold may be.

Marque and Reprisal is an action-packed book, a tragic book, and it’s also one that shows incredible growth for its main character. I’m very excited to see what happens next for Ky and her wounded – but never beaten – crew. Definitely recommended.

Kylara Vatta looked at the mass of paperwork from Belinta’s Economic Development Bureau and sighed. The real life of a tradeship captain: paperwork and more paperwork, negotiation with shippers, customers, Customs officials. The life she hadn’t wanted, when she chose to enter the Slotter Key Spaceforce Academy, and the life she had fallen back into when she was expelled. Boring. Mundane.

Not that her recent experiences in Sabine had been boring or mundane–terrifying was more like it–and no one would want another trip like that.

Except that she did. She remembered very clearly the rush of excitement, the soaring glee of the fight itself, the guilty delight when she’d killed Paison and Kristoffson. So either she wasn’t sane or…or nothing. She thought of the diamonds tucked into her underwear drawer. Not enough to restore her old tub of a ship completely, but enough to take her to somewhere else, somewhere she could make the kind of life she really wanted. Perhaps the mercenaries would accept her violent tendencies; they’d offered a chance. Perhaps someone else. It would annoy her family, but not as much as the truth would hurt them.

No. She had to finish one job at least. Crew depended on her. The ship belonged to her family, as well, and she could not possibly earn enough to buy it away by the next stop or the next. She sighed again, signed another sheet, and stared at the next. All right, then. Take this old tub to Leonora, deliver that cargo, then to Lastway. If she couldn’t finance a refit by then, return to the original plan and go home by commercial passenger ship. If she made enough profit, enough to do the refit, she could get that done and bring the ship back to Slotter Key, and then resign. Or–she stared into a distance far beyond her cabin bulkhead. She could send the ship back with someone else. Quincy, for instance, knew enough to run the ship herself.

In the long run, her family would be better off without her. If her father knew how she’d felt when she killed…no. She had had those nightmares, trying to explain to that gentle man, hoping for his understanding but seeing the horror in his face. Better the smothering, overprotective love that had annoyed her in their last conversation than that horror, that disgust, that rejection. If she went home, he would sense something; he would try to probe, try to get her to confide in him, and eventually he would wear her down. It would be worse than anything else that had happened, to have her father sorry she was ever born.

Reading Next: Winterling by Sarah Prineas