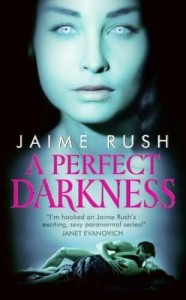 Stand Alone or Series: Book 1 in the Offspring series

Summary:
They live ordinary lives, but they are extraordinary. They are the Offspring, children of a mysterious experiment gone awry—and they are in terrible danger.

A sexy stranger awakens Amy Shane in the dead of night. Lucas Vanderwyck barely has time to whisper a few words before three men burst into her bedroom and drag him away. But what Lucas reveals shatters Amy’s safe little world forever.

Lucas and Amy share a psychic gift—a gift that could put them in mortal danger. And as they share night after night of savage passion, as a shadowy government conspiracy tracks their every move, they will fight to save each other. But only with their powers of second sight can they escape the terror of a perfect darkness.

Why Did I Read the Book: Full disclosure: The publisher asked us if we would like to read the book and potentially review it. I thought the blurb sounded intriguing (“X-Files meets Roswell” – I am so there) and said yes.

She prefers to life this isolated life part because of her own self-esteem issues (which are described later in the book, as “abandonment issues” – she has no parents) but also because Amy can see other people’s auras – or Glows – which pretty much tell her their feelings and intentions.

Until this one night, when a stranger breaks into her house, wakes her up and tells her that her father did not commit suicide, that she is one of the Offsprings and that she might be in danger. He says his name is Lucas and that they are not strangers. Before he can say anything else, FBI agents burst in and take him away. Amy is pretty shaken up by this and calls Cyrus (who works for the CIA) who promptly tells her that Lucas was a lying psychopath wanted by the law but Amy doesn’t believe him. She smells fowl play – the FBI agents didn’t even interrogate her – and she decides to investigate further. Mysterious circumstances lead her to an art gallery owned by a Lucas Vanderwyck where she sees paintings of her dreams! And she realises Lucas and the man that comes to her are the same person. Not only that, she meets two other people, siblings Eric and Petra Arruda, who are also Offsprings and Lucas’ foster family.

She learns that all of them have a few things in common: they lost one or two parents when they were a child and they all have psychic gifts. Eric, Petra and Lucas have only recently learnt that they are the so-called Offsprings wanted by the Government for these very same powers. Taking Lucas is only one of the step in the conspiracy led by a villain who wants to use their powers in the name of Country (or is it?). Amy is now adamant that they need to save him – especially when he visits her again in his dream and tells her he is not going to make it and that she should not try to save him – and find out more about what it means to be an Offspring.

I absolutely loved the premise of the book – the conspiracy and the idea of the “Offspring”. As a paranormal reader who reads mostly books with vampires, changelings, angels and demons, to have the prospect of Psychic powers (dream-weavers, seers, aura-readers, pyrotechnics all in one series!) was rather refreshing. I especially liked the fact that the book had very cool fact-paced action sequences, an intriguing mystery and that we found out everything at the same time the Offspring did – even the powers that they had. We get the point of view of all of them – Eric, Lucas, Petra, Rand and Amy and as an ensemble story , A Perfect Darkness does really work. Each of the characters has its own moment, its own power and its own personality and I thoroughly enjoyed that.

I really wish that the series was marketed as UF with romantic elements rather than Paranormal Romance because unfortunately the “romance” aspect does not work very well. For starters Lucas and Amy spend most of the book apart meeting only in dreams when there is very little talk and a lot of sex. And yet, Amy finds herself professing her love for Lucas really fast and easy whilst at the same time feeling herself unworthy of his love (time and again she would think: he loves me! he loves me? But I am not lovable nor pretty!) . This woe –is-me tendency (which Lucas shared by the way: Oh noes, I will put her in danger she cannot know I love her) does not even ring true to a character that got right in the thick of action and did really well for herself by escaping the FBI and CIA and joining (crazed) Eric and Petra in the effort of rescuing Lucas. Lucas was the more interesting half of the romantic aspect of the book with a lot of potential for darkness as his dream-weaving and future predicting powers got him acting like a vigilante and doing things that sets him firmly in the morally grey area but there is hardly any repercussions for what he has done; nor there is any mention of the fact it is utterly FREAKISH and STALKERY to have him visiting Amy is her dreams and having sex with her when he knows the dream is actually happening and she doesn’t. Speaking of the sex, they were my least favourite parts – not only because it smelt of “required sex to make this a paranormal romance” but because I am not sure the author is used to writing sex scenes. They came across as so unnatural and almost scientific. There is one in particular where there is mention to “vaginal walls” and clenching of Kegel muscles and to say I was detached from it, is to put it very mildly.

To be perfectly fair, both Lucas and Amy will be regular characters in the next books as well and I am hoping their story will carry on – and his moral ambiguity as well as Eric’s will be further explored – parallel to the other Offspring. This seems to be what the author has in mind, in any case. If so, I think the series DOES have a lot of potential.

Even though I thought the romance did not work and the writing was not the best I have seen lately, I liked the action, the premise , the other Offspring (there are Ultra Offspring, you know) and the grey areas that some of the characters inhabit. As a first book in a new series this is a mixed bag of good and bad but the good just about tips the scale towards an “I will read the second one to see how it goes”.

Notable Quotes/ Parts: I REALLY liked the final sequences with the Offspring recuing another one of them from the Government Facility. It was a really cool, action packed sequence that brought all 5 of them together. I am looking forward to see where they go from there. Plus, I really like Rand and his ability to see 10 seconds into the future.

Verdict: Good paranormal premise but uninspiring romance writing. It has potential to become a good series though and I will read the second one.