Book Review: The Dark Between by Sonia Gensler 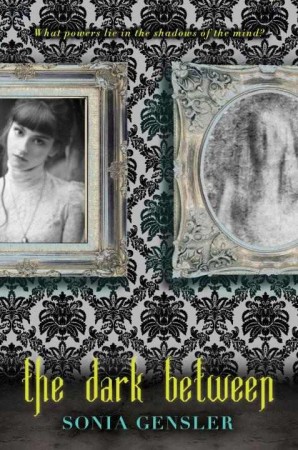 Title: The Dark Between

A supernatural romance about the powers that lie in the shadows of the mind, perfect for fans of Sarah Rees Brennan, Alyxandra Harvey, and Libba Bray.

At the turn of the twentieth century, Spiritualism and séances are all the rage—even in the scholarly town of Cambridge, England. While mediums dupe the grief-stricken, a group of local fringe scientists seeks to bridge the gap to the spirit world by investigating the dark corners of the human mind.

Each running from a shadowed past, Kate, Asher, and Elsie take refuge within the walls of Summerfield College. But their peace is soon shattered by the discovery of a dead body nearby. Is this the work of a flesh-and-blood villain, or is something otherworldly at play? This unlikely trio must illuminate what the scientists have not, and open a window to secrets taken to the grave—or risk joining the spirit world themselves.

Stand alone or series: Can be read as a standalone (but seems to have potential for a future series)

Why did I read this book: I’ve had my eye on Sonia Gensler since last year, with the release of her YA historical novel The Revenant. While that book didn’t quite sell me on its premise, The Dark Between – with its focus on seances, Victorian hoaxes, and trio of young protagonists – sounded right up my alley.

The year is 1901, the place Cambridge, England. Kate, Asher and Elsie are three young strangers ensnared in a scheme of secret societies, experimental sciences that border on the supernatural, and a sticky web of deceit. Fourteen-year-old Kate Poole is faced with a life-changing dilemma when her employer, a false medium, is caught in the middle of her scheme to deceive and extort money from aggrieved wealthy patrons. Kate, having been blamed as the mastermind behind the scheme, is dismissed by her conniving employer and finds herself in desperate need of a job to survive. With nowhere else to turn, she demands a job from one Mr. Thompson, who resides at Summerfield College on the Cambridge campus, and one of the skeptics that exposed her former employer’s ploy. To convince Thompson to take her in, Kate plays a card she’s held close to her chest – Kate Pool is, in fact, the bastard daughter of one of Thompson’s late dear friends and colleagues, Frederic Stanton.

It is at Summerfield that Kate meets young man Asher Beale (a rich young American on the outs with his father), as well as Thompson’s niece, Elsie Atherton (a lovely girl with angelic looks and a sweet disposition). Elsie’s comely appearance, however, masks a secret – she suffers from apoplectic fits, explained away as a type of epilepsy, for which she must take a strong dose of a dangerous narcotic (Chlorodyne). In truth, Elsie can see and commune with the dead, and the Dose is the only way to keep the spirits at bay.

Together, the cunning Kate, skeptical Asher and clairvoyant Elsie must combine their talents to get to the bottom of a string of mysterious deaths in Cambridge – their own lives depend on it.

The second book from Sonia Gensler, I was expecting The Dark Between to be a full-blown Victorian ghost story and murder mystery, complete with some Spiritualism hokum (and, if the cover copy is to be trusted, some kind of romance). In truth, The Dark Between is less a dedicated murder mystery than it is a story about three characters from very different walks of life completing their own various arcs of self-growth, understanding, and confidence – all the while they are figuring out who is behind a few deaths in the Cambridge area. And, thankfully, the romantic elements are actually unexpectedly subversive, rather than the dreaded love-at-first-sight-I-must-have-you-or-DIE nonsense – but more on that in a bit.

The Dark Between‘s greatest boon (and my favorite thing about the book) is with its trio of protagonists and their development over the course of the novel. The feisty Katie Poole is the first character readers get to know, and of the three she is the most confident in herself, her wants, and her strengths (sneaking about, spying, and coming up with new schemes to keep food in her belly and live to see another day). Kate is also the youngest of the group and, unlike Elsie and Asher, she’s also a girl without parents or fortune. When she’s dismissed by her nightmare of an employer, Kate bold as you will, comes up with a brash plan to keep her off the streets. (Needless to say, I love Kate’s character very, very much.) While Kate is completely confident, she also feels lost and abandoned – by her wealthy lordling biological father, who remarried and recently died by “misadventure,” and by her mother, whose illness led to addiction to the dreadful drug Chlorodyne. Kate’s story involves coming to terms with her past, and accepting help from others – both developments which are masterfully executed.

In contrast, Asher is a mooning sort of youth, angry at his father for reasons initially unknown, and who is immediately besotted with the beautiful young Elsie. Asher’s friendship with Kate and Elsie, his change of heart (from the ennui so popular with rich male heirs at the turn of the century), and his peace with his father makes for a very nice arc over the course of the book. And, while Asher isn’t my favorite character, he certainly grows on you as he grows as a person throughout the narrative, and I appreciate that very much.

And then, of course, there’s Elsie. Earlier I mentioned my surprise at the unexpectedly subversive romantic elements to The Dark Between – and this is largely because of Elsie’s character (and my second favorite thing about the book). Elsie is a beautiful young woman with refined manners and of good breeding; she should have the world in the palm of her delicate pale hand. But, that isn’t quite the case. You see, Elsie’s problem – her fits whenever a ghostly presence comes near – is the great embarrassment of her parents, who have turned their daughter into a Chlorodyne addict and have shipped her away to Cambridge to live with her Aunt and Uncle following Elsie’s latest escapade (an illicit affair with her art tutor). Elsie’s dependence on Chlorodyne and the symptoms of her addiction and withdrawal are detailed and paid careful attention by author Gensler, and opens up a whole other thematic focus in The Dark Between – that of mental illness, experimental “treatments” (shudder: violent electroshock therapy), and societal mores and perception at the turn of the 20th century. While this thread isn’t quite as well-developed as I’d hoped (how fascinating would this book have been without true ghosts or supernatural elements?), I do appreciate Gensler’s exploration of the evolution of scientific treatments and attitudes towards the mentally ill and the supernatural (as viewed through the distorted lens of well-meaning Educated Men – in secret scientific societies – making decisions for their less-fortunate fellow humans).

Which brings me back to Elsie, and the examination of gender roles in the book. Elsie is a dreamer and an impulsive girl that falls “in love” very quickly, and acts on those emotions boldly, which is both admirable and infuriating. Admirable, because Elsie’s pursuit of the men she loves is certainly a nice bold counter to many YA paranormal or Victorian-esque romances wherein sweet young girls are pursued by rich/dashing/powerful young men. Infuriating, because Elsie falls in love immediately with almost anyone (at first it is her art tutor, then it is another scholar, Simon Wakeham). Elsie, you see, tends towards the dramatic, and to be frank is the type of character that I’m certain many readers will not care much for early in the story. I certainly was frustrated with her, especially at one point at which Elsie overdoses in her heartbroken distress. BUT, this action is countered swiftly and completely by Kate’s point of view, who very clearly lays out a possible motivation for Elsie’s longing for love — and by the end of the book, Elsie has her own revelation:

A strange excitement quickened her pulse, but it was nothing like the giddy pleasure of anticipation. Rather it was a charge to her senses that came from doing something important, taking a risk to achieve a good thing, a right thing. She’d never felt this way before. For so long she’d allowed herself to slip into drowsy avoidance whenever conflict reared its head. The only effort she’d made was to attract a man. One who would solve her problems just by loving her. It seemed ridiculous now.

Which is all kinds of awesome to read.

And this is to say nothing of the writing, the overall historical research, the plotting, and the actual ghosts in this ghost story. Gensler’s prose is deft and feels true to the period, and clearly she has done her research of Cambridge and put her own unique spin on real world locations and events.[1. Of course, while I think everything seems very nicely researched I would be SO interested to see what Ana thinks, given that she lives in Cambridge, naturally!] Take, for example, the following: 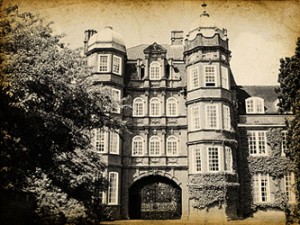 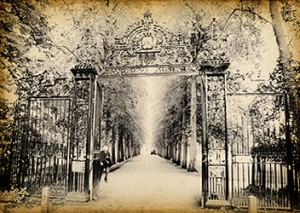 The first image is from Newnham College, Cambridge, a post-secondary institution for women founded in 1871 and the inspiration for The Dark Between‘s fictional Summerfield College; the second image shows the gates of Trinity College, Cambridge, founded in 1546, the college from which the founding members of the fictional Metaphysical Society (inspired by the real life Society for Psychical Research) graduated.

While the detail and writing are finely wrought, I did feel that the actual mystery and supernatural aspects of the book were weak overall. The mysterious killer, and said killer’s motivations, are fairly predictable, and there’s a lack of actual ghostly encounters in the book. Also, The Dark Between lacks a sense of urgency to crack the central mystery – which isn’t necessarily a bad thing, as this is more of a character piece. My only remaining complaint is that the ending feels a little rushed and a little cheesy – there’s clearly the possibility of a second book in this series given the revelation at the novel’s conclusion.

Ultimately, all things said, I thoroughly enjoyed this book and will certainly be checking out more of Sonia Gensler’s work in the future.

Notable Quotes/Parts: No excerpt online, but you can check out the official book trailer below:

Reading Next: The Nazi Hunters by Neal Bascomb

A Tale of Two DNFs: Book Discussion and Giveaway of Night’s Rose by Annaliese Evans