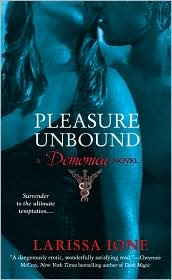 Summary:In a place where ecstasy can cost you your life…

She’s a demon-slayer who hungers for sensual pleasure—but fears it will always be denied her. Until Tayla Mancuso lands in a hospital run by demons in disguise, and the head doctor, Eidolon, makes her body burn with unslakable desire. But to prove her ultimate loyalty to her peers, she must betray the surgeon who saved her life.

Two lovers will dare to risk all.

Eidolon cannot resist this fiery, dangerous woman who fills him with both rage and passion. Not only is she his avowed enemy, but she could very well be the hunter who has been preying upon his people. Torn between his need for the truth and his desire to find his perfect mate before a horrific transformation claims him forever, Eidolon will dare the unthinkable—and let Tayla possess him, body and soul…

Why did I read the book: After Kmont’s and Ciara’s sterling reviews, how could I not?

Tayla is a Demon Slayer. A Guardian that works for the Aegis, a society of human warriors that are dedicated to fight evil, trained in combat techniques and that have a limited use of magic. Tayla is a single minded demon killer that has found solace in the world of Aegis after her mother was brutalised and killed by a demon in front of her very eyes. For Tayla all demons are the same, all demons deserve a brutal death. Her world is black and white.

Tayla has been experiencing some problems with her body and one night, she is paralysed in the midst of a fight which ends up with her partner killed and Tayla severely injured and taken to the hospital. Turns out the hospital she is taken to is the Underworld General Hospital, a hospital that caters solely for…demons. Hidden in the underground of NY, cloaked beneath magic spells that protects it from non-demons and from the Aegis.

Eidolon is the Chief Doctor and along with his brothers Shade and Wraith, run the hospital. The three are a breed of Incubi (sexual demons ) called Seminus. They all have the same father but their mothers are from different species altogether (Wraith for example is part vampire). Each has a specialized medical skill and utterly different personalities that derive from their upbringing with different families.

E has a bit more control over his sexual needs than his brothers Shade and Wraith (Side note: Wraith’s book, please hurry up) because he was raised by a family of Judicia demons, known for their cool logic and later served as a Justice Dealer before deciding to become a doctor. That background of control over his urges, is helping him right now, since he is about to go through his change. When a Seminus demon reaches his 100th year he goes through his final maturation cycle and becomes fully capable of procreation. The thing is, the urge to procreate becomes their sole purpose in life, and they can become crazed rapists. The only thing that can keep a fully matured Seminus demon leashed is a bonded mate. The catch? They can live for hundreds of years and to find a mate willing to be together for that long is tricky, to say the least. The prospect of reaching his maturity and becoming a creature bent on procreating is driving E crazy. The irony comes from the fact that to become what he is supposed to, he has to loose his very own identity – his job as a doctor, his family, his friends and ultimately his life because nothing will keep him from impregnating females until someone stops him.

When Tayla shows up at their hospital, they are furious that the paramedics brought “Buffy” to their place but they decide that she can be useful. They want to find out if she knows anything about the people that have been preying on demons , kidnapping and harvesting organs for the black market. The demons suspect the Aegis is behind the attacks. The other demons are not really worried at how they will get the information from her (torture? Yeah, why not?) but Eidolon can not let himself or anyone else really hurt Tayla.

Tayla then wakes up to her worst nightmare. Surrounded by Demons, no way to escape. But that is not the worst – being in the midst of demon land brings up questions that she has never dared to think: are they really all the same? And with that, her black and white world comes crumbling down at the same time that her attraction to Eidolon starts to grow. Time is running out for everybody: for Eidolon who needs to find a mate, for Tayla whose body is rebelling and she doesn’t know why and for the demons that must fight the threat against their lives.

And this is only the beginning. I was pleasantly surprised with this book. The world building is multi-faceted , with different breeds of demons and its rules and the humans that think they know everything about them but don’t. The story unfolds and there are many threads that are interesting and kept me guessing with a whole bunch of interesting secondary characters (from Eidolon’s brothers to the Guardians, from other doctors at the hospital to a human called Gem who has an important role to play and one I did not see coming) that had their share of spotlight without really detracting from the main couple.

I love how the relationship between Eidolon and Tayla was in constant evolution. Not an easy relationship given their true hatred for each other’s species. They begin as purely sex partners (a word of caution: prepare thyself for some hot, scorching, graphic and somewhat mindless sex scenes) and there is a slow development into something more – they are not even consciously aware that they are truly and surely in the way of falling in love. At first Eidolon do seem a bit callous but as soon as the first signs that he truly cares for the slayer start to show up, mamma mia.

Tayla had a huge way to go from the start of the book. Falling for a demon and at the same time realising that they can feel and they can be and do good was a tremendous earthwork in her world. It puts everything that she is, everything that she has lived for in jeopardy. I love that even though it was painful and it was terrifying she didn’t shy away from the truth. She is a marvellous heroine, of the truly kick-ass variety (she can so take Eidolon) and the one with the funny voice in the book – a much needed element in a dark book. Yes, this book is dark, not only because of the potential dangers they face, death and torture but because it is centred around the demon world and the author does not walk away from the fact that they are….demons. Real demons.

A lot of characters, Shade and Wraith for example, future protagonist in the series, walk in a very fine line of acceptable behaviour. It is not pretty but that is ok. It is not supposed to be pretty. That is the whole point. These people are demons and even though they are not evil, the good that they are is not of the goody-goody variety. This book comes in all sorts of shades of grey and it’s all the more better for it.

Notable quotes/ Parts: I absolutely loved the relationship between the brothers. Their devotion to each other was the first signal to Tayla that demons are not mindless killing machines. Eidolon was SUCH a hero not only with Tayla but with his brother Wraith and how he suffers the dire (REALLY DIRE) consequences of his brother’s behaviour because he doesn’t think Wraith would survive. There is a scene towards the end when he asks Shade to kill him if he matures without going through the mating bond and Shade has to promise. And then Shade, callous, sexual crazed Shade, sheds a tear. Awww.

We also are given insights of Shade and Wraith which has me counting the days for their books: Shade goes through life completely embracing his inner sexual demon , no strings attached, threesomes, you know, the works. And he has Teh Curse – he can never let himself fall in love. We know no more than that.

Wraith on the other hand, is one of the Tortured heroes. Body and soul, lost , adrift, doing Really Bad Things. I have no idea how she is going to work on his hero potential, because at the moment, he has none. (Which in my mind is to say, he has plenty).

Additional Thoughts: even though I loved the book and most of it was really, really good, there were a couple of things that did bother me. My main gripe was with Tayla’s …situation. Tayla had a ….problem. A sexual one that came from a very traumatic experience and that had been plaguing her for years. The moment she tells Eidolon about it and he ….works through her ….problem , it is magically solved. It felt way too easy and too soon. Of course, I wouldn’t expect it not to be solved, but a few more….. attempts would have been more convincing to me.

Verdict: Highly recommended for fans of Paranormal Romance. The world building is interesting and the romance is heart warming. And very sexy.