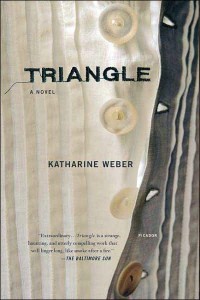 By the time she dies at age 106, Esther Gottesfeld, the last survivor of the Triangle Shirtwaist fire, has told the story of that day many times. But her own role remains mysterious: How did she survive? Are the gaps in her story just common mistakes, or has she concealed a secret over the years? As her granddaughter seeks the real story in the present day, a zealous feminist historian bears down on her with her own set of conclusions, and Esther’s voice vies with theirs to reveal the full meaning of the tragedy.

A brilliant chronicle of the event that stood for ninety years as New York’s most violent disaster, Triangle forces us to consider how we tell our stories, how we hear them, and how history is forged from unverifiable truths.

Why did I read this book: A few reasons: first, I was in the mood for something different, and historical fiction (or what I thought was historical fiction) sounded like just the ticket. Second, I currently live at NYU, where the Triangle Shirtwaist Factory was – the anniversary of that terrible fire was last week, and I felt like it was a very fitting time to read this highly acclaimed novel.[1. Also I should note that I am kind of a nerd when it comes to 20th century American and European history (it was one of my undergraduate majors). So, OF COURSE I was going to read this book when a review query found its way to our inbox!]

In 1911, the Triangle Shirtwaist Factory caught ablaze and claimed 146 lives, and remains one of the most devastating fires and industrial accidents in America’s history. The fire led to legislation that would improve sweatshop working conditions, unionization of female garment workers, and improved safety standards, and is an important, tragic event in the industrial history of the United States. In Triangle, Katharine Weber explores a fictional account of the Triangle fire through its last living survivor, Esther Gottesfeld. At 106 years old, Esther has lived a long life having escaped that deadly blaze, although she lost her fiance and sister to the fire. Before her death, a zealous feminist historian named Ruth Zion has been attempting to gather as much primary source evidence she can about the fire and the somewhat unclear involvement that Esther had in the aftermath. When Esther dies before Ruth can complete her research, the historian turns to her only surviving relative, Rebecca, for answers. As Rebecca and her partner, renowned musician and composer George Botkin, are pestered by the determined Ruth, they gradually discover the truth about Esther, and must come to grips with the depth of their loss.

When I began Triangle, I had no real expectations save that I would be reading about the infamous Triangle Shirtwaist Fire with a mystery/possible conspiracy bend. That’s somewhat true. At the heart of the novel this is Esther’s story about what she has survived, both before and after the fire. It’s a tale of love and loss which balances the power of memory and of truth. Easily, the strongest parts of this book lay with the revelations of Esther’s past and how gradually they are revealed. Although this is a prose narrative novel, certain key chapters are taken from Ruth’s source material – namely, interview transcripts with Esther, especially a record of Esther’s testimony following the fire in 1911. These testimonies are incredibly effective, and Ms. Weber creates a strong, believable voice for Esther. There’s a scene in court, for example, where she is forced to repeat her account of the events in the factory fire three times, and it’s incredibly powerful and revealing seeing how her story changes each time she tells it. Of course, there are also the descriptions of the blaze, of workers choosing to jump to their deaths instead of getting burned alive. In Esther’s words:

I never thought to jump, I have to say. But I wasn’t burning up. I think if you are burning up, you want to jump out into the fresh air, and draw another breath, and save yourself for another few seconds, so you can have one more breath of air. It just seems like human nature, if you have the choice. You take the chance, even if it isn’t any kind of real chance, because you can. You jump and you hope.

The sights, sounds, even smells of the fire come alive in these transcripts, and it’s a harrowing experience to read. Esther’s character, with everything she has had to endure from the loss of her fiance and sister to the loss of her son and his wife…well, it’s saddening, but she’s such a strong character that the overall effect is not gratuitous or sadistic (as I find much literary fiction is wont to be). At the end of the novel – though saddening, as Esther has had to be alone for so long – one can’t help but feel roused by her story.

Now, all this praise made plain, I have to admit that Triangle is also an infuriating book. While the facts of the fire and Esther’s characterizations are so incredibly strong and detailed, over half of the novel is devoted to a future (in September of 2001) storyline, with a focus on – of all things – George Botkin’s musical theories. I admit, this was initially fascinating – George is something of a musical prodigy and is able to perceive of patterns in the everyday world, and uses things like gene sequencing and geometry to compose his pieces. That’s cool. It’s great. But why for the love of Pete is this the focus of the novel!?

This was infuriating to me as a reader – clearly, Ms. Weber is a talented author, but the amount of time devoted to the musical stylings of a secondary character (he’s not even related to Esther and has no interest in the fire at all, initially) is obscenely disproportionate. Similarly, while the characterizations of Esther and Ruth (the quirky, determined historian) are undeniably solid, I simply wanted more of Esther’s extraordinary life – not that of her grandchild, Rachel, or lord forbid her prodigious musican lover. This strange focus felt almost pretentious; perhaps this was meant to be a quirky counter to the gravity of Esther’s tale, but it felt like a grave disservice to the history of the fire, and to Esther herself.

The other niggle that persisted and bothered me was the obvious 9/11 parallel – I don’t think it was necessary to make Triangle a book about 9/11, and I feel like the allegory could have been much stronger had the towers been left out of the novel entirely (i.e. Esther does not NEED to die on September 7, 2001). The New Yorkism, the people jumping from buildings, all of this is already implied and need not be made so explicit; in effect, these blatant allusions feel rather indelicate, even borderline pretentious/exploitative. But again, that’s just my opinion – certainly others (such as Entertainment Weekly in its review of the book) feel otherwise.

My forays into literary fiction are few and far between, and at least this was one of my more successful undertakings. I loved the historical aspects to the novel and Esther’s characterization more than anything else, and although my opinion of the novel is tarnished somewhat by the bizarre focus on a secondary character’s musical abilities and an uncomfortably obvious contemporary lens vis-a-vis 9/11, I still enjoyed the book.

I am nearly done with tellign you what happened, but I got to say about my sister and what happened next. Sam goes to help the next girl get up on the sill, the fourth girl, he gives her his hand and helps her get steady, and I see it is my sister, she is there with him in the window. He helps her up, and then she waits for him and what does he do but he gets up onto the ledge next to her, and he put his hand on the side of the window, to get steady, and you can see the flames right behind him, coming out the window next to him, and then he takes her arms and he puts them around his neck, like he can save her like if they were swimming in the ocean, and he puts his arms around my sister and they kiss each other, and then they jump, the two people I have in the world, they jump out of the world.

Additional Thoughts: We were actually first contacted about this title in conjunction with the HBO documentary that aired on March 25th, for the hundredth anniversary of the Triangle fire. Here’s more about the documentary:

Rating: 6 – Good, but could have been much better, in my opinion.

Reading Next: Chime by Franny Billingsly

Over at Kirkus: The Waiting Stars by Aliette de Bodard