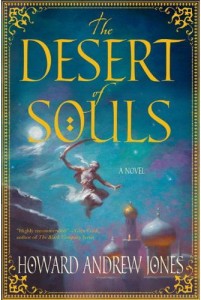 Title: The Desert of Souls

Stand alone or series: Can be read as a stand alone novel (but could be part of a series?)

In 8th century Baghdad, a stranger pleads with the vizier to safeguard the bejeweled tablet he carries, but he is murdered before he can explain. Charged with solving the puzzle, the scholar Dabir soon realizes that the tablet may unlock secrets hidden within the lost city of Ubar, the Atlantis of the sands. When the tablet is stolen from his care, Dabir and Captain Asim are sent after it, and into a life and death chase through the ancient Middle East.

Stopping the thieves—a cunning Greek spy and a fire wizard of the Magi—requires a desperate journey into the desert, but first Dabir and Asim must find the lost ruins of Ubar and contend with a mythic, sorcerous being that has traded wisdom for the souls of men since the dawn of time. But against all these hazards there is one more that may be too great even for Dabir to overcome…

Why did I read this book: I have been yearning for a fantasy novel with apart from the usual western European medieval-ish setting. The Desert of Souls absolutely delivered.

The parrot lay on the floor of his cage, one claw thrust stiffly toward the tiny wooden swing suspended above him.

With a dead parot, a possibly poisoned olive, and a bored vizier, The Desert of Souls begins. When Asim, captain of the guard to the kind but spoiled noble Jaffar, is summoned by his master to investigate the matter of the dead bird, Asim quickly invents a diversion. Suggesting that Jaffar accompany himself on the streets of Baghdad to escape from the depression of his dead pet, Asim invites the scholar Dabir along for the adventure. What the three men discover on their jaunt, however, is a mystery, danger and magic. When a dying man crosses their path, begging for aid from his pursuers, the three men are drawn into a plot involving renegade Greeks, powerful sorcerers, magical doors, and a long lost city in the sand.

The Desert of Souls is Howard Andrew Jones’s debut novel, although he has written a number of short stories involving the same world and characters, and I have to say that I am a big fan. This is a very Scheherazadian sort of tale, with familiar tropes – the noble in disguise, evil magicians, daring/strong willed noblewomen, machinations for power – but told in a fashion that is utterly immersive and realistic. Mr. Jones never once breaks narrative character, as the story is told from Asim’s perspective. With a flair for telling stories (even stories within a story at times), Asim is a perfect narrator for his and Dabir’s adventures across a stunning 8th century Baghdad and beyond. My favorite thing about this book is how refined the narrative was, with every detail of the prose, dialogue and descriptions painting a complete picture of the time (with a few embellishments and magical additions, of course). From a plotting perspective, The Desert of Souls is firmly traditional, rooted in familiar tropes and taking the shape of a standard adventure/quest – but this book is a perfect example of how to do these old tropes and still manage to be entertaining. (They’re old favorite tropes for a reason, right?)

From a character perspective, both Asim and Dabir are wonderful protagonists with a what looks to be the start of a great friendship. Asim’s observations and aforementioned awesome narration are what drive the novel, but Dabir is the Sherlock to his Watson. I loved this duo, however I must confess that I did feel like at times I was missing some vital background information. I haven’t read any of the short stories involving Asim and Dabir, and I felt like some of that was taken for granted in The Desert of Souls – at one point, for example, Asim tells a story of how he, Jaffar and Dabir encountered a beautiful but deadly woman, barely escaping with their lives. There is clearly a lot of background with Asim and Dabir, and having not read any of their prior adventures, i felt a little left out. That said, I was able to make the necessary assumptions and connect the dots, and now have a strong urge to go back and read said short stories.

The Desert of Souls is a fantastical adventure, that plays with familiar tropes but employs such strong characterizations and narrative style that any lack of originality (plot-wise) is easily forgiven. I loved this book, and cannot wait for more from the talented Howard Andrew Jones.

The parrot lay on the floor of his cage, one claw thrust stiffly toward the tiny wooden swing suspended above him. The black olive clenched in his beak was the definitive sign that Pago was a corpse, for while he had fooled us all by playing dead in the past, he had never failed to consume an olive. To be sure, I nudged the cage. It shook, the swing wobbled, and the bird slid minutely but did not move a single feather of his own accord.

“He is dead,” Jaffar said simply behind me; simply, but with the weight of the universe hung upon the final word.

I turned to my master, who sat with his back to me upon the stone bench of his courtyard. The second-story balcony, from which the cage hung, draped Jaffar in shadow. Beyond him, sunlight played in the rippling water that danced from a fountain. Flowers blossomed upon the courtyard plants and wild birds warbled gaily. Another parrot, in a cage upon the far wall, even called out that it was time for a treat, as he was wont to do. But my master paid no heed to any of this.

I stepped into the sunlight so that I might face him. Upon another bench, nearby, the poet Hamil sat with stylus and paper. There was no love in the look he bestowed me, and he returned to his scribblings with the air of a showman.

“Who could not be?” Jaffar asked wearily. He was but a few years younger than my twenty-five, but due to time indoors looked younger still, no matter his full beard. His face was wan, from a winter illness that had also shed some of his plumpness.

“He was the brightest bird here,” Jaffar continued in that same miserable tone.

“Brighter than many in your employ,” Hamil said without looking up.

“Is there some way that I can help, Master?” I was the captain of Jaffar’s guard and sometimes his confidant; the matter of bird death, however, was outside the field of my knowledge, and I did not understand why he had summoned me. It is true that I had found Pago entertaining, for in addition to playing dead, he could mimic the master and his chief eunuch, and even sometimes answered the call to prayer by bowing thrice. He did this only when it pleased him to do so, which, as my nephew Mahmoud once noted, was far too much like many men he knew. Also Pago had once perched upon the poet’s chest when Hamil had passed out from consuming the fruit of the grape, and pinched his long thin nose heartily. That had pleased me so that I brought Pago the choicest of olives whenever I knew I would pass by his cage.

Reading Next: The Hollow Kingdom by Clare B. Dunkle