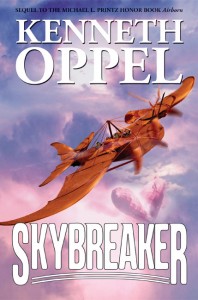 Stand alone or series: Book 2 of the Matt Cruse trilogy

Former cabin boy Matt Cruse, now a student at the prestigious Airship Academy, is first to identify the Hyperion, the private airship of a reclusive and fabulously wealthy inventor that disappeared forty years ago with its owner. Armed with the Hyperion’s coordinates, which only he possesses, Matt, heiress Kate de Vries, and a mysterious young gypsy board the Sagarmatha, an airship fitted with the new skybreaker engines that will allow them to reach the Hyperion, 20,000 feet above the earth’s surface. Pursued by others who want the Hyperion and will stop at nothing to get it, and surrounded by dangerous high-altitude life forms, Matt and his companions are soon fighting not only for the Hyperion but for their very lives.

In this thrilling sequel to Airborn, a Michael L. Printz Honor Book, Kenneth Oppel evokes the classic storytelling of Robert Louis Stevenson and Jules Verne, creating a world in which a new discovery can have unimagined consequences — on earth and miles above it.

Why did I read this book: I absolutely LOVED the swashbuckling adventure-cum-steampunk novel (and Printz Honor book) Airborn, so I immediately went out and bought Skybreaker and Starclimber. And…of course those books languished on my sprawling TBR. This week (after just finishing a publishing trend report assignment on Steampunk), I knew it was time to crack open book 2 and catch up on the shenanigans of Matt Cruse and Kate de Vries.

If I had to sum up Kenneth Oppel’s Skybreaker in just a few words, it would be those above. Matt Cruse has made his place in my heart as one of my absolute favorite young heroes in recent memory – certainly my favorite steampunk hero and narrator, period. As with Airborn, the Printz honor preceding novel, Skybreaker is a fast-paced adventure that pays tribute to the swashbuckling works of Daniel Defoe and Robert Louis Stevenson, but with a steampunk-ish, Verneian twist. These pirate ships are in the sky, an aerial realm that is both familiar, and limitless.

In Skybreaker, Matt Cruse begins his second adventure as a student at the Airship Academy, on a class-required mission aboard a salvage ship aptly named the Flotsam. With a careless captain at the helm, the ship makes its way through a terrible storm by rising above the clouds at dangerously unstable altitudes – and then they catch sight of the long lost Hyperion. The Hyperion is the airship version of a sunken shipwreck, rumored to be full of bounty, waiting to be claimed by the first crew lucky enough to find her. The captain, gaining sight of the long-lost ship, immediately orders his crew to pursue it, recklessly endangering his ship and crew by rising up to an unprecedented 20,000 feet. Before everyone passes out and dies of altitude sickness and hypothermia, Matt is able to turn the ship around and bring her in to port – but finds his life soon changed. The ship’s navigator died in the rapid ascent and descent, leaving Matt Cruse the only person on the Flotsam that was clear-headed enough to know the coordinates of the long lost Hyperion and all her treasures. When he returns to Paris, someone has leaked the story to the press, and Matt finds himself pursued on multiple fronts by pirates with no scruples, willing to beat the information out of him, a strange gypsy girl that won’t leave him alone, and the vivacious Kate de Vries, who has a plan of her own to find the Hyperion and win fame and fortune. Faced with considerable danger, and also sensing that the lovely young heiress is slipping away from him due to his impoverished state as a mere cabin boy-cum-penniless student, Matt agrees to Kate’s plan to find the Hyperion – hoping to make his own fortune, and win Kate’s heart, in the process.

Skybreaker is, as its predecessor, an amazing, un-put-downable book. Matt Cruse and Kate de Vries are two of my favorite characters in the YA space, with Matt’s quiet humorous charm and Kate’s over-the-top exuberance and wit. An heiress without a care in the world, besides her penchant for madcap adventure and danger, Kate reminds me of those vivacious devil-may-care film heroines of the 20s and 30s. Matt, of course, has stolen my heart with his frank narration, integrity and humor. For example:

It was a good story, I couldn’t deny it. Slater had looked at no one but Kate as he’d told it. And she had listened, rapt, giving little sighs of excitement and appreciation throughout. It made me want to gnaw the rim of my glass.

Oh, Matt. There are a few new additions to the cast in Skybreaker, too, with the inclusion of the slick, polished Mr. Hal Slater (and the jealousy Matt feels for the accomplished and handsome man) and the quick-witted, beautiful Roma girl, Nadira (who adds complications of her own). I also loved the continued allusions to other swashbuckling novels and films, ships, authors, etc throughout Skybreaker, from the Jewels Verne to the Marie Celeste.

And of course, the plot is as deftly handled with a brisk, steady hand, as ever. There is adventure in spades in Skybreaker, and twists and romance and danger abound. I loved every single second of this book, devouring it in basically a single sitting. Skybreaker is even better than Airborn, in this reader’s opinion, with all the loving familiarity and romantic adventure of an Errol Flynn film. If you haven’t enjoyed Matt Cruse yet, READ THIS SERIES. Ignore the terrible covers that Eos has cursed it with. Skybreaker is awesome.

The storm boiled above the Indian ocean, a dark, bristling wall of cloud, blocking our passage west. We were still twenty miles off, but its high winds had been giving us a shake for the past half hour. Through the tall windows of the control car, I watched the horizon slew as the ship struggled to keep steady. The storm was warning us off, but the captain gave no order to change course.

We were half a day out of Jakarta, and our holds were supposed to be filled with rubber. But there’d been some mix-up, or crooked dealing, and we were flying empty. Captain Tritus was in a foul mood, his mouth clenching a cigarette on one side, and on the other, muttering darkly about how he was expected to pay and feed his crew on an empty belly. He’d managed to line up a cargo in Alexandria, and he needed to get us there fast.

“We’ll clip her,” he told his first officer, Mr. Curtis. “She’s not got much power on her southern fringe. We’ll sail right through.”

Mr. Curtis nodded, but said nothing. He looked a little queasy, but then again, he always looked a little queasy. Anyone would, serving aboard the Flotsam under Tritus. The captain was a short, stocky man, with a greasy fringe of pale hair that jutted out beyond his hat. He was not much to look at, but he had Rumpelstiltskin’s own temper, and when angry – which was often – his fist clenched and pounded the air, his barrel chest thrust forward, andhis orders shot out like a hound’s bark. His crew tended to say as little as possible. They did as they were told and smoked sullenly, filling the control car with a permanent yellow pall. It looked like a waiting room in purgatory.

The control car was a cramped affair, without a separate navigation or wireless room. The navigator and I worked at a small table toward the back. I usually liked having a clear line of sight out the front windows, but right now, the view was not an encouraging one.

Flying into a storm, even its outer edges, did not seem like a good idea to me. And this was no ordinary tempest. Everyone on the bridge knew what it was: the Devil’s Fist, a near-eternal typhoon that migrated about the North Indian basin year-round. She was infamous, and earned her name by striking airships out of the sky.

“Eyes on the compass, Mr. Cruse,” the navigator, Mr. Domville, reminded me quietly.

“Sorry, sir.” I checked the needle and reported our new heading. Mr. Domville made his swift markings on the chart. Our course was starting to look like the path of a drunken sailor, zigzagging as we fought the headwinds. They were shoving at us something terrible.

Through the glass observation panels in the floor, I looked down at the sea, nine hundred feet below us. Spume blew sideways off the high crests. Suddenly we were coming about again, and I watched the compass needle whirl to its new heading. Columbus himself would have had trouble charting a course in such weather.

“Two hundred and seventy-one degrees,” I read out.

“Do you wish you were back in Paris, Mr. Cruse?” the navigator asked.

“I’m always happiest flying,” I told him truthfully, for I was born in the air, and it was more home to me than earth.

Additional Thoughts: Book 3 in the Matt Cruse trilogy is Starclimber, with the following synopsis: 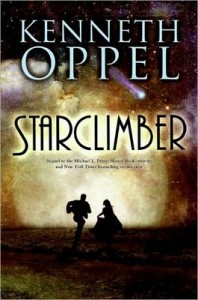 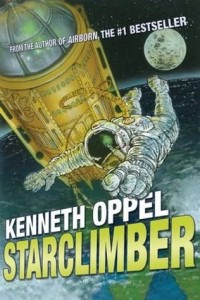 The sequel to Airborn & Skybreaker…

At long last, Matt Cruse is at the helm.

Though it’s only a summer job piloting a humble aerocrane, he’s thrilled to be a small part of something big. With every load, he’s helping to build the Celestial Tower, Paris’s extraordinary gateway to outer space. But Matt’s idyllic summer is short-lived. He narrowly survives a deadly attack by the fanatical Babelites, who are opposed to humans reaching the heavens. Worse still, his nights spent stargazing with Kate de Vries must end when she’s summoned back to Lionsgate City by her parents. It’s time she began to think about getting married.

But then a chance of a lifetime boosts Matt’s hopes of being airborne once more. Canada wants to reach space first, and the Canadian Minister of Air has asked Kate to join the first expedition as an expert on aerial zoology. There’s a place for Matt, too—if he can pass the grueling tests to become one of the world’s first astralnauts on board the incredible ship Starclimber.

It’s a race to the very top, and Matt is determined to be a part of the adventure. But can he outlast his competition? And if he is chosen to join the crew, will they ever return to Earth?