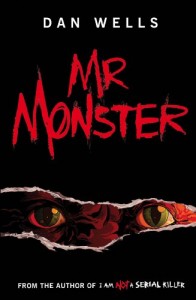 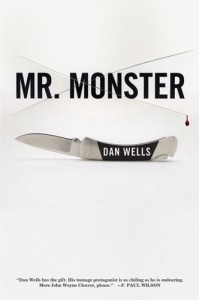 I killed a demon. I don’t know if it was really, technically a demon, but I do know that he was some kind of monster, with fangs and claws and the whole bit, and he killed a lot of people. So I killed him. I think it was the right thing to do. At least the killing stopped.

Well, it stopped for a while.

In I Am Not a Serial Killer, John Wayne Cleaver saved his town from a murderer even more appalling than the serial killers he obsessively studies.

But it turns out even demons have friends, and the disappearance of one has brought another to Clayton County. Soon there are new victims for John to work on at the mortuary and a new mystery to solve. But John has tasted death, and the dark nature he used as a weapon—the terrifying persona he calls “Mr. Monster”—might now be using him.

No one in Clayton is safe unless John can vanquish two nightmarish adversaries: the unknown demon he must hunt and the inner demon he can never escape.

In this sequel to his brilliant debut, Dan Wells ups the ante with a thriller that is just as gripping and even more intense. He apologizes in advance for the nightmares.

How did I get this book: Review Copy (from both publishers)

Why did I read this book: Despite my skepticism (Cynical!Thea: Oh, this is just a Dexter knock-off [insert eye rolling]) I ended up truly loving the first book (Cynical!Thea: [one hour later] Holy effing shit, batman! This is like Dexter on The X-Files and made of awesome!). I was chomping at the bit to get back to John’s sociopathic struggles.

After discovering the identity and supernatural nature of the Clayton Killer, John Wayne Cleaver (a portent name if there ever was one) was able to stop his next door neighbor from his murderous rampage – but at a great cost. For John, a clinically diagnosed sociopath, has unleashed his dark alter-ego, Mr. Monster, with whom he has battled his entire life to keep safely walled off and under control. Having had a taste of murder, however, Mr. Monster is clawing at his shackles; his homicidal tendencies threaten to overtake John. John’s careful, specific rules – no thinking bad thoughts, no stalking others, no fire, no cruelty to animals – have started to slip. And, with the FBI asking questions about his testimony in the Clayton Killer case combined with a tense home environment and his shrink dead, John’s tenuous grip on control begins to crumble. When new bodies begin to show up in Clayton again, John knows that another demon must be to blame – but can he stop the murders again without losing himself in the process?

Well. Hot diggity damn. Mr. Monster takes the foundation of I Am Not A Serial Killer and raises the bar – big time. As a big Dexter fan (television show, I am hopelessly behind with the books), I had my doubts with Mr. Wells’s debut novel, but besides the supernatural element, John Wayne Cleaver has proven himself to be a different, maybe even better (anti-)hero than his older counterpart. See, the thing about John is he’s a sociopath, but he knows right from wrong. He freaks you out with his fantasies and tendencies towards violence, torture and murder, but he knows that giving in to his beast is unforgivably wrong. He struggles against his very nature, and this is why he is, by definition a hero. Even if he’s a disturbing hero that would rather kill the girl of his dreams, rather than hold her hand. No one else knows John the way readers do – we alone see his unedited thoughts and fantasies, and his struggles to keep those fantasies behind locked doors. Seriously, it’s incredible – anyone else would have given in. But though there’s always that question of whether or not john will succumb to his own Dark Passenger, he has found a way to fight it. And that’s what makes him an endearing – if terrifying and really creepy – character.

From a storytelling perspective, Mr. Monster widens the scope of the supernatural. The plotting is solid, and although the actual mystery/story does take a bit long to get going, the book’s third act is harrowing, breathtaking stuff, channeling some of the most terrifying crime/thriller works. I won’t give anything away, but suffice to say that this new type of demon is a cut worse than its predecessor.

Mr. Monster walks a fine line between exploitation and finesse; repulsion and awesomeness. Mr. Wells manages to balance the horror and darkness of his protagonist with something like hope, and manages to do this without pulling any punches. This type of characterization is…well, ingenious. It is what makes the book, and I am even more impressed with the darkness of Mr. Monster. John crosses some big lines in this installment, and yet, I still want him to prevail. More importantly, I still want to read his story, even if he doesn’t prevail.

Now that is the mark of an awesome storyteller.

I loved Mr. Monster, and, as I said before: holy effing shit, Batman. With a last line like the one in this book, I am completely won over. I need book 3. Now. Absolutely recommended – if you haven’t read John Wayne Cleaver yet, get on it immediately.

It was probably a white cat, but here in the dark I couldn’t tell for sure; what little moonlight filtered through the broken windows turned the room into an older version of itself, a scene from a black and white movie. The cement block walls were gray, the dented barrels and stacks of wooden planks were gray, the piles of half-used paint cans were gray; and there in the center, refusing to move, was a gray cat.

I played with the plastic jug in my hands, turning it back and forth, listening to the gasoline as it sloshed around inside. I had a book of matches in my pocket and a pile of oily rags at my feet. There was enough old wood and chemicals in here to fuel a spectacular fire, and I desperately wanted to light it, but I didn’t want to hurt that cat. I didn’t even dare scare it away, for fear that I might lose control.

So I stared at it, waiting. As soon as it left, this place was gone.

It was late April, and spring was finally winning its battle to transform a dull, frozen Clayton County into a cheerful green one. A big part of this, of course, was the fact that the Clayton Killer had finally left us alone—his vicious killing spree had lasted almost five months, but he’d stopped very suddenly, and no one had heard from him since January. The town had huddled in fear for another two months, barring their doors and windows every night, and waking up each morning hardly daring to turn on the TV and see another shredded corpse on the morning news. But nothing had come, and slowly we’d started to believe that it was over for real this time, and there wouldn’t be any more bodies to clean up. The sun came up, the snow melted away, and people started smiling again. We’d weathered the storm. Clayton had been tentatively happy for almost a month now.

I was the one person, in fact, who hadn’t been worried at all. I’d known for certain that the Clayton Killer was gone for good, way back in January. After all, I’m the one who killed him.

Reading Next: A Matter of Magic by Patricia C. Wrede

Over at Kirkus: Horrorstör by Grady Hendrix