So, last week, Ana talked about a few books she tried to read this past month, but could not finish. I really, really loathe DNFs. I try to muscle through books as much as I can – but sometimes, sometimes one just has to accept defeat and do the unthinkable…putting the book down.

Such is my case with The Heir of Night by Helen Lowe.

Title: The Heir of Night 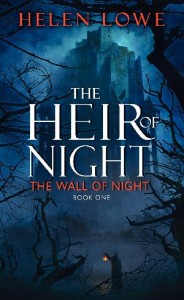 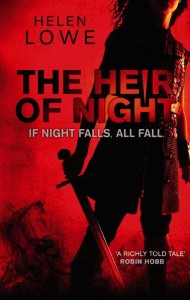 In the far north of the world of Haarth lies the bitter mountain range known as the Wall of Night. Garrisoned by the Nine Houses of the Derai, the Wall is the final bastion between the peoples of Haarth and the Swarm of Dark—which the Derai have been fighting across worlds and time.

Malian, Heir to the House of Night, knows the history of her people: the unending war with the Darkswarm; the legendary heroes, blazing with long-lost power; the internal strife that has fractured the Derai’s former strength. But now the Darkswarm is rising again, and Malian’s destiny as Heir of Night is bound inextricably to both ancient legend and any future the Derai—or Haarth—may have.

How did I get this book: Purchased a copy

I have had my eye on The Heir of Night for a long time – since before its release in October last year, this has been a book on my radar. I liked the “dark is rising” conflict, the young protagonists, the traditional setting, and heck, there’s a blurb from Robin freakin’ Hobb on the cover talking about the awesome worldbuilding. How could I resist?

Unfortunately – and as much as it pains me to say it – I simply could not get into this book. The Heir of Night and I, for some pernicious scheme of the universe, are incompatible. The story is familiar: in a traditional fantasy setting (with a sci-fi twist), the blooded nobles of the House of Night hold their keep against the agents of evil and chaos. Though magic is available in this world, any of the blood born with magical abilities are shunned, for the Nine noble Houses of the Derai have suffered civil war, death and destruction for the follies of those nobles with too much power (well, sort of). Those with ability are either turned out and ostracized, or sent to the priesthood to develop their talents (sort of…), and any blooded heir must immediately become disowned.

The current Heir of Night, Malian, has always been a high-spirited and curious child, and one night while exploring the “old keep” (because there are two keeps, and one of them has been sealed off and declared off limits because it’s old and haunted) she manages to pull a Spock-like mindmeld with some golden voiced entity that tells her to wake up the new keep and warn everyone about invading Darkswarm soldiers (some kind of werebeast, I think?), which she can do – but it exposes her as incredibly magically talented. She runs into an apprentice priest boy (who also is of the blood from a different house, but has been kicked out because of his own magical talent) and together they hide from the invaders in the old keep, whilst waiting for help from the new keep. While hiding, Malian (with the help of golden voice) does mental battle with with the Darkswarm mind-vampire and nearly gets herself killed. Meanwhile, everyone in the new keep has heard her telepathic warning, and does battle against the invading foes. When Malian is discovered missing, her father, the otherwise cold Earl of Night, fears the worst – the loss of his heir, either to magical talent or invaders is an unforgivable loss. Malian, of course, is safe, but not for long. Receiving warning from the mysterious voice, and after some trippy dreamwalking excursion in which she discovers that she is the centuries-foretold hero of the Derai, Malian and her friend must leave the comfort of the keep, to fulfill their destinies. And this is where I gave up (approximately page 260 or so).

The thing is, The Heir of Night has a lot of things that I should theoretically like. There’s the very dense, very traditional, type of setting, what with the envoys of the night and pigheaded nobility, and foretold hero of the ages, and magic, and warrior women, and all that jazz. There’s also a cool science fiction aspect to the fantasy (reminiscent of C.S. Friedman’s Coldfire Trilogy), with the Derai arriving from the stars (but having since lost that technology).

The thing is, I simply couldn’t get into ANYTHING with this book, from the packed-in prose to the world setting to the two-dimensional characters. I found my attention constantly wandering, and I had no feel for who these people were (they all suffered from fantasyname-itis[1. You know what I mean. In quick succession early in the book we are introduced to Malian, Jiron, Nhairin, Lannorth, Teron, Rowan Birchmoon, and Korriya. That’s a whole lot of made up names with no context. It’s hard to keep them all straight (especially since there’s no dramatis personae, and since the names are of the fantasy persuasion (i.e. impossible to spell, sometimes impossible to pronounce, and infinitely harder to keep straight in one’s mind)]), or why I should I care for them. There were moments of interest, and I wouldn’t mind the traditionalism of the story so much (even if it is very much the aforementioned Friedman meets P.C. Hodgell’s Godstalker Books) if the characters were there. But they aren’t. The two child protagonists sound like everyone else in the book, and it doesn’t help that Malian, the titled Heir of Night naturally has Anakin Skywalker levels of midichlorians in her bloodstream in terms of magical prowess (despite the fact that the bloodline and magical abilities have supposedly thinned out significantly over the centuries). There’s such a large cast that no one is fully developed, and every character blends into the next – then again, maybe this gets resolved later in the book.

Beyond the lack of any characters to connect with on even a superficial level, the backstory for the world and the houses of the Derai lacked anything truly gripping. It doesn’t help that the betrayal of the houses because of one jealous man’s failing is related entirely in storytelling time info-dump mode.[2. Seriously, the passage begins like this: “Well, if you cannot sleep, why not explain one of your Derai mysteries? Tell me this story of the Great Betrayal, your civil war.” And then he does.]

I’m kind of at a loss at how to articulate my feelings with the book, and I know this commentary is rambling. There are a number of details that I should like about this story, but the execution of the ideas just couldn’t cut it for me. I couldn’t make myself read more, as I couldn’t really muster any excitement for the rest of the book. This could very well just be a personal failing as lots of people seemed to have liked this book – but for whatever weird reason, I could not get into it. I found my attention constantly wandering and…well, it just wasn’t right for me.

Have you read The Heir of Night? Care to make an argument for the story? I’m all ears – and though I’ve given up for now, I’ll keep this one around just in case. For now, it’s my first DNF of the year.

Rating: DNF – but I vow to try some of Helen Lowe’s other work, in the near future

Reading Next: Never Knew Another by J.M. McDermott

Over at Kirkus: Insignia by S.J. Kincaid