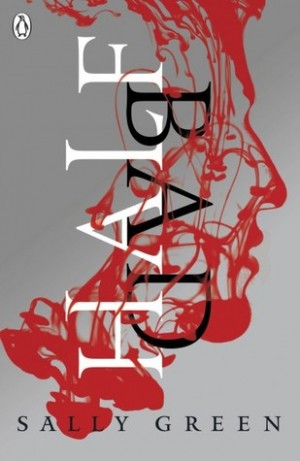 In modern-day England, witches live alongside humans: White witches, who are good; Black witches, who are evil; and fifteen-year-old Nathan, who is both. Nathan’s father is the world’s most powerful and cruel Black witch, and his mother is dead. He is hunted from all sides. Trapped in a cage, beaten and handcuffed, Nathan must escape before his sixteenth birthday, at which point he will receive three gifts from his father and come into his own as a witch—or else he will die. But how can Nathan find his father when his every action is tracked, when there is no one safe to trust—not even family, not even the girl he loves?

In the tradition of Patrick Ness and Markus Zusak, Half Bad is a gripping tale of alienation and the indomitable will to survive, a story that will grab hold of you and not let go until the very last page.

How did we get this book: ARC from the Publisher via Netgalley

Why did we read this book:

England, modern-day. Witches live alongside humans, who are mostly unaware of their magical counterparts. In the world of the witches, Black witches are evil and White witches are good and both vie for power. In Britain, the White witches have successfully culled (read: exterminate) most of the Black witches in an attempt to save themselves.

Nathan’s is the only known Half: half-Black, half-White witch. His father is Marcus, the infamous, powerful and most evil of Black witches. His mother was a White-witch from a good family, and now she is dead. Nathan has never met his father but hopes one day he might.

Although his immediate family (apart from one of his half-sisters) has always been protective of him, Nathan has grown up hearing how bad he is, a victim of intense persecution, prejudice and violence. Then the White Witches Council determines that Nathan needs to be taken away from his family.

Kept in cage, constantly beaten and under surveillance at all times, Nathan is keenly aware that he needs to escape before he reaches the age in which all witches are given three gifts then learn the extent of their powers and abilities. As a Black witch, he will die if he doesn’t.

I’ve been trying to gather my thoughts about Half Bad ever since finishing it. I will be upfront and say: I didn’t find it a particularly good book although it succeeds in some points. Amongst those, the relationship between Nathan and his half-brother is touching and the second person narration is effective.

Nathan’s viewpoint carries the story – part of it in second person narration (“You”), part of it in first person. The second person narration is one of the best aspects of Half Bad. The story opens with Nathan’s ordeal: he is being kept in a cage, constantly observed, working as a house-slave for the person who is keeping him. The cruelty he experiences is almost indescribable and it makes perfect sense that the narration here is in second person. It is very effective in showing the dissociative state Nathan lives as a means of self-preservation.

The narration changes into first person when remembering his life, which is presented as another way of self-defence as he remembers the kindness he has known from his brother Arran and his childhood sweetheart, Annalise who happens to be a White witch. That most of his memories also dwell on the ignoble torture and violence he has suffered doesn’t seem to matter – in fairness it makes sense, because one cannot simply forget that amount of suffering. And Nathan has suffered. A lot. In fact, 60% of this book is dedicated to let us know how much Nathan has suffered, by making sure to describe in graphic detail all the violence and persecution that Nathan has experience all his life. From alienating him from others to constant surveillance From mild name—calling to outright bullying and physical violence and torture, a large part of this book is all bad bad torture bad bad torture stab burn torture. Ok book, I GET IT. Nathan has had a tough life! You know, I realised that from the moment that the BOOK OPENS WITH HIM LIVING IN A CAGE.

Now, I understand and appreciate the points this story is trying to make. That violence often does not have a point and it’s often loud, and in your face. That even though the White witches believe themselves to be good, they are still capable of horrible acts of violence when moved by fear and prejudice. That this narrative of “intrinsic goodness” from the side of the winners is bound to be biased. That Nathan, after suffering all this might out as bad as people expect him to be and how can anyone judge him? (You know, Nature versus Nurture). But these are put forth with such a heavy hand, all I wanted to do was to scream: You do not need to HIT ME OVER THE HEAD WITH YOUR POINTS, BOOK, FOR I AM FULLY CAPABLE OF MAKING MY MIND UP. I can’t help but to feel that the story is going for edgy for edgy ’s sake – and everything else including worldbuilding and secondary characters fizzles out in comparison as do the extremely hurried last 40% of the book.

And to be frank, I am not even sure that Nathan’s terrible life makes sense from an internal logic point of view: it seems counterproductive and counterintuitive that the Council – a group that so expertly were able to create political circumstances in which to dominate their world – would so treat someone they hoped to use as an ally in the future. But I guess you cannot really expect bigots to be intelligent or fair.

Very disappointing read. I’ve no interest in carrying on with the series.

I love it when we disagree.

Half Bad is not an elegant book, nor is it particularly subtle, or even well-written. It’s a raw, bloody flurry of a read that is both effective and frustrating.

Half Bad (I apologize if I call it Bad Half because THAT is what it looks like to me on the cover and I think it makes sense with the story) is kind of like a really, really messed up Harry Potter. (I mean, imagine all the sweetness and innocence sucked out of the early Harry Potter books, and jumping straight to the Dark Lord’s return, Sirius, the battle for Hogwarts time. That’s a bit how Half Bad feels from the onset.)

Like Harry Potter, Half Bad is set in a version of our world with witches and magic. Witches are only born of other witches, although bloodlines occasionally mix between White and Black, and Witches and Fains (think: muggles). In order to become a full Witch, a Whet (child witch) must reach 17 years of age and receive three “gifts” from a Witch of their bloodline (literally, the child must drink the blood of the Witch). I love this familial twist, that the three gifts must be bestowed by a family member that carries one’s blood, otherwise a whet dies a terrible death. It’s like a truly messed up – but given how violent and murderous this society is, an utterly necessary – evolutionary survival trait.

Of course, the really interesting stuff happens in the division between White and Black witches: this is an overt dichotomy in which Whites are Good and Blacks are Bad. This is what Nathan has been told his whole life, and as a half-White, half-Black whet, he’s been tortured about his evil heritage for his entire young life. Literally tortured. The thing is… Whites aren’t actually as good as they portend to be. They hate, hunt and kill Black witches (preemptive self-defense!); they brutalize and marginalize anyone with half-Black blood (or even half-Fain blood); they are, in short, not nice people. I love that we never see Black Witches until the end of the book, and they hardly seem as terrible and evil as the Whites.

That said, this is hardly a subtle message, and I totally get where Ana is coming from with her frustrations at the bluntness of this book’s messaging. And yet… despite the utter lack of subtlety or grace, I very much enjoyed diving into this messed up world. (In a sadistic way. You know what I mean.)

The other part of the book that worked, in my opinion, was Nathan’s characterization. Ana has covered this, mostly, so I’ll just say that I wholeheatedly concur, and found his narrative to be so genuinely painful, raw, and honest. From his coping mechanisms to the use of an almost stream-of-consciousness-esque second-person narrative, I believed in Nathan. His life has been so painful, so fraught with hate and anger; at the same time, this is what makes the flashes of true love and glimmers of happiness in his life so vibrant. The relationship with brother Aran chokes me up a little bit, as does his connection to his grandmother and sister Josephine. Then there’s Nathan’s desperation for his father’s attention that is so gut-wrenching to read, his eventual friendships with Gabriel and Nikita, and – my favorite – the dependency between Nathan and his jailer, Celia.

On the negative side, however, I was not a huge fan of the romantic interest which read as manufactured and out of place with the rest of the story (although we’ll see how the star-crossed lovers fare in future novels, I suppose). Similarly, I agree with Ana in that I wasn’t enamored with the book’s final act, which felt rushed and underdeveloped. Finally, there’s the question of style and writing overall, which I think is the real polarizing point for Half Bad. Have no illusions: this is not a very well-written book. Its themes are blatant, it has all the subtlety of a sledgehammer, and its plotting is scattered and lopsided.

But the roughness of the book and it’s struggles are almost… endearing. Like Nathan’s arc – so fraught, so raw, so pained – Half Bad won me over in part because its unrefined nature mimics its protagonist’s arc.

But that’s just me. I recommend giving this book a shot, and I’ll certainly be back for more.

Ana: 4 – Bad but not without some merit