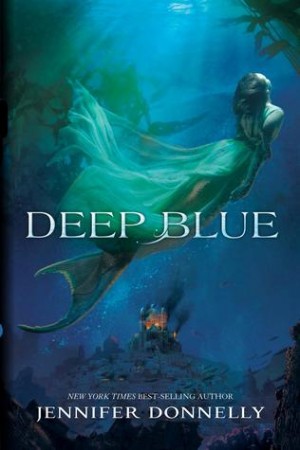 The first in a series of four epic tales set in the depths of the ocean, where six mermaids seek to protect and save their hidden world.

Deep in the ocean, in a world not so different from our own, live the merpeople. Their communities are spread throughout the oceans, seas, and freshwaters all over the globe.

When Serafina, a mermaid of the Mediterranean Sea, awakens on the morning of her betrothal, her biggest worry should be winning the love of handsome Prince Mahdi. And yet Sera finds herself haunted by strange dreams that foretell the return of an ancient evil. Her dark premonitions are confirmed when an assassin’s arrow poisons Sera’s mother. Now, Serafina must embark on a quest to find the assassin’s master and prevent a war between the Mer nations. Led only by her shadowy dreams, Sera searches for five other mermaid heroines who are scattered across the six seas. Together, they will form an unbreakable bond of sisterhood and uncover a conspiracy that threatens their world’s very existence.

Stand alone or series: First in the Waterfire Saga

Why did I read this book: I fell in love with how beautiful this book is – the cover, the illustrations. I was also curious because Jennifer Donnelly is an author who comes highly recommended and there was a lot of hyper surrounding the book.

The production values of Deep Blue are astonishing. From a purely tactile perspective, this book is stunning: a lovely cover, blue lettering and gorgeous illustrations fitting the under-the-sea theme peppered throughout. The book is the first in a four-book series launched with much fanfare by Disney as a multi-platform “saga”, including an enhanced ebook and an original song. According to this PW article, the book will have a staggering “250,000-copy first printing, and the $500,000 marketing campaign for the novel includes a national author tour kicking off May 6; print, TV, and in-theater consumer advertising; promotion through ABC Family and Hollywood Records; and a retail floor display with riser.” I wouldn’t be surprised if the next step was a TV show or an upcoming Disney movie. Its author is a successful, respected writer who has penned well-reviewed YA and adult novels.

The premise is pretty cool too: Serafina is a 16-year-old mermaid of the Mediterranean Sea, the princess of Miromara, the oldest civilisation of the merfolk. She is bound by duty to her kingdom and by the love for her people even as she feels the burden of her position. On the day of her Dokimi ceremony – a traditional, gruesome rite that will determine whether she is worthy of the crown – which will precede her engagement to dashing Prince Mahdi, everything changes. The kingdom is attacked, her mother is mortally wounded and Serafina has to run away if she is to stay alive.

The attacks are directly connected to Serafina’s haunting dreams. She dreams of sea witches who foretell the imminent return of an ancient evil and who call to Serafina and five other mermaid heroines – each from a different sea kingdom – to unite and fight to save their world. They just need to find each other first then go on a quest to get the six talismans spread across the oceans of the world.

Starting with the good: I dig the idea behind the book. Even if the tropes are familiar (a Quest! To Find Talismans! And Save the World!), I like the fact that it’s six mermaids, from different parts of the world (India, China, Brazil, etc – bonus points for diversity). I am always up for stories about girls going on adventures, becoming friends, developing a sisterhood and saving the world. The idea here is also to examine the burden of power and tradition, the question of identity and ecological issues affecting the oceans of the world. I even liked the cheesiness of the many (many!) language puns (“currensea”, “merlfriend”).

The problem really is that the execution leaves a lot to be desired. My problems with it are manifold: from tone to voice, from character development (or lack of) to the writing. And the info-dumping. Oh my goodness, the info-dumping. The first 25% of the book as well as it last few chapters are all exposition. Obviously the author put a lot of thought into creating this world from its historical background (all the way back to Atlantis) and magic system to the many (many!) details of the world. This includes everything: clothes, hairstyles, social customs, and furniture. It’s all very clunky. Worst of all, some of it is even ridiculous. Bearing in mind this is all set under water, I couldn’t help but to laugh at the descriptions of hairstyles, dresses and tea drinking. This last one drove me to distraction: how exactly do you pour and drink hot tea from a teacup, under the sea?

Info-dump and silliness can be forgiven if the writing is right, if the voice is engaging, if the characters are well-developed. But no such luck. The camp nature of the language and the silliness of these world-building details clash heavily with the nature of the story. There is a darkness inherent to the story – death, torture and destitution for example – that is never truly matched by the light tone of the narrative.

This is amplified by the simplistic writing and between that and the heavy info-duping, I can’t help but to think that the book has been written down. The teenagers in the book sound much younger and there is a lot of hand-holding, artless dialogue and internal monologue. This is the sort of internal monologue that can be found in the book:

“Life is a beauty contest. And I’m sick of competing in it, sick of being a smiling, pretty little princess. There was another contest that mattered now – a contest for Cerulea, one of life and death.”

There is very little in terms of character development and the biggest draw of the story – the relationship and bond between the mermaids – ends up being a big disappointment. Serafina and her best friend Neela literally swim into the other mermaids and from there on instantly develop a bond of sisterhood. They all sound like each other too and it’s hard to differentiate each mermaid. Considering the diversity of backgrounds and how they are each from a different part of the world, it is disquieting when the extent of a character’s ethnicity is limited to an Indian sari or to “almond-shaped eyes”. I guess the idea behind this is that “all teenagers are the same” but I think this is naïve at best, reductive at worst.

The right foundation was just right there for this to be a resounding success. What a shame that Deep Blue isn’t all that good. My experience reading it can be summarised thusly: it was equal parts me going “well, this is cheesy fun” and “wow, this is bad”. Ultimately, the terribleness of its flaws became so overwhelming they eclipsed any of its promising elements.

Reading Next: One Man Guy by Michael Barakiva