Arcana Review Part I: The Kairos Mechanism by Kate Milford

We’re reviewing a double-dose of Kate Milford’s Aracana Project – two novellas set in the same world as her awesome full-length novels The Boneshaker and The Broken Lands. Today’s review (Part I) is for The Kairos Mechanism; tomorrow we review Bluecrowne. 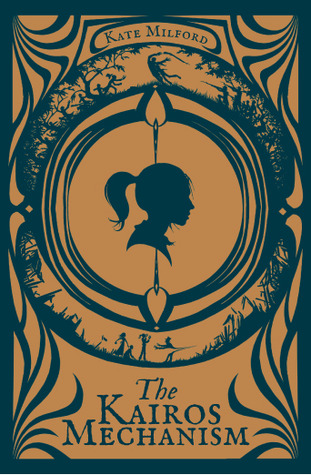 September, 1913. The crossroads town of Arcane, Missouri, is a place where strange things happen, and lately those strange things have a habit of happening to thirteen year-old Natalie Minks. It’s Natalie who first encounters the two boys who arrive in town seemingly out of nowhere, carrying a dead man between them. Odder still, a few of her older neighbors immediately recognize the dead man as a fellow citizen who’s been missing for fifty years–and who doesn’t appear to have aged in all that time. When another newcomer, a peddler called Trigemine, arrives in town, Natalie learns why the two boys and the peddler have really come to Arcane. And, of course, she realizes she has to stop them.

Like The Boneshaker and The Broken Lands, The Kairos Mechanism is a moderately frightening folklore-based fantasy. If you have read The Boneshaker, you’ll find the novella full of clues as to what’s coming and bits of history about characters you’ve already met. If you haven’t read it, don’t worry. You’ll fall in love with Natalie and Arcane right away.

Stand alone or series: Can be read as a standalone, but follows the events of The Boneshaker

How did I get this book: Bought (ebook)

The Kairos Mechanism is the first short story in Kate Milford’s Arcana Project – the self-published companion novellas set in the same world as her full-length, traditionally published works – and follows a few familiar faces from The Boneshaker. It is still 1913, and thirteen-year-old Natalie Minks has already saved her strange crossroads hometown of Arcane once from a grave evil. But while Dr. Limberleg and the ills brought by his traveling emporium have been stopped, Arcane is still a strange and powerful crossroads that draws the attention of other strange and powerful creatures…

In The Kairos Mechanism, Natalie watches as two young men – one not much older than herself, one about the age of her own brother – walk into town, carrying a dead body. Not just any dead body, but the body of the younger brother of Arcane’s own saloon owner, Mr. Maliverny. The curious thing though is that it’s the freshly deceased corpse of a young man – and Cole Maliverny should be an elderly man. His pallbearers are curious young men, too – something about these strangers seems out of joint and out of time.

What it all comes down to, as Natalie discovers, is kairos – not the chronological order of time (chronos), but the potentiality of time. Arcane in 1913 is a town ripe for potentiality, and other parties have taken notice. In particular, a sulter (that is, a person who followed the army, peddling goods) who has a unique ability to play with time has set his sights on a particular artifact in Arcane. Once again, Natalie must step in to protect the town and the people she loves from evil…

Oh, The Kairos Mechanism, you are a worthy successor to The Boneshaker (a book which I loved dearly). Natalie Minks remains one of my favorite MG heroines because of her braveness, her fierceness, and her penchant for mischief – all qualities shining in abundance in this novella (including Natalie punching a few people in the face, eavesdropping on conversations, and ultimately saving the day). Beyond Natalie, I also love the burgeoning friendship she is growing with Miranda – who is the “girly-girl” to Natalie’s tomboy, but who is every bit as fierce and smart and awesome (with an iron arm, to boot). Something that makes me a little wary in fiction, particularly MG/YA fiction, is the divide between “girly” (associated with silly, boy-crazy, frivolous and therefore less worthy) and “tomboyish” (associated with smarts, physical prowess, and practicality, therefore more worthy) – while this type of labeling is at the forefront of Natalie’s mind, I love that Milford’s narrative challenges those labels with Natalie and Miranda’s friendship, and with the fact that Natalie is starting to get a little older and noticing things a little differently. (I cannot wait to see how this progresses in future stories and books!) The other standout character here is an entirely new face to this series – a boy named Ben, who is out of time and desperate to fulfill an ugly task to save his brother. I love the friendship that unfolds between him and Natalie very much, and desperately hope there’s a way that we can see more of brave young Ben again in the future.

Beyond the characters, though, The Kairos Mechanism is so wonderfully effective because it is so deliciously creepy. I count all of the books in this series as types of horror novels – not the blood and guts kind (although I do want to point out that there is an explosion of blood at one point), but of the sinister magical forces and people kind. In Kairos, Natalie and her friends are up against a frightening peddler named Mr. Trigemine, and his desire to find a certain relic – a relic that turns out to be something entirely unexpected – at any cost. There’s time travel involved, changing of the past and its effects on the future, and a small mechanism that can control them all – all of this is beautifully written in this novella.

Suffice it to say, I loved this book. I love that with every new story, we learn a little more about the magic and the people – both ordinary and extraordinary – who shape this world. And on that happy note, I should say that while you can read this novella as a standalone, you’ll enjoy it all the more after you read The Boneshaker – so if you haven’t done that yet, do yourself a favor and get started. Then read The Kairos Mechanism, and thank me in the morning.

“Kairos,” he said slowly, “is the right moment. It’s the moment when
time is ripe for something. It’s … ” He paused, thinking. “Potentiality? Do you know what I mean?”

Natalie frowned, then shook her head.

“Well, I don’t know how much better I can explain it,” Ben mused. “I don’t really understand it, not exactly. But I gather there are two kinds of time. There is chronos, which is .. .it’s what time is if you imagine that it’s like a line.” He
reached down to draw a line in the dust between his right boot toe and the toe of Natalie’s left shoe. He marked a spot near his foot. “Here I am, back in the war. And if we follow time, as if it was a line, until it comes here to you … ” He marked another cross at Natalie’s end of the line. Then he ran his finger over the line between the two marks. “This is chronos: one thing happening after another, all
in what I guess you’d call proper order.”

“And kairos … kairos is the proper time for something specific.” He scratched his nose thoughtfully. “You don’t know much about fighting, do you?”

“Kicking and punching, but not like what you mean, probably.”

“No, I mean fighting in battle. Most of the really big engagements I’ve been part of have begun with two lines of force: us, and them.” He held his arms out in front of him, palms facing each other. “The lines are the armies, and when the fighting begins we start crashing at each other, trying to find points of weakness, because if you can find those points and drive through them, you can break the other army up and defeat it or drive it into retreat.”

“Well, sometimes those weak points are actual places where the army’s line isn’t well defended or where you can take advantage of the landscape. But sometimes, the weak point is a moment where the circumstances line up just right. Someone’s orders got garbled. A commander has doubts. His men are underfed or angry or don’t like him as much as the fellow he replaced. Heck, once I saw an entire battlefield come to a standstill just because there was a blood moon rising.”

**Make sure to stick around tomorrow, as we review the second story in the Arcana Project and interview author Kate Milford (with a giveaway of a set of her books)!**

You can purchase The Kairos Mechanism 3 ways:

The Illustrated Kairos Mechanism (Free/pay what you like; illustrated by teen artists; PDF only)