Title: Doppelganger (re-released in 2008 as Warrior) 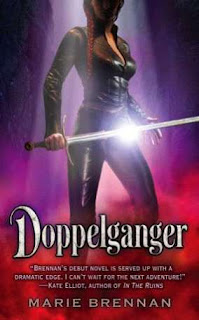 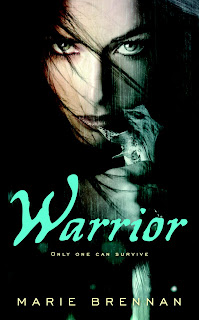 Stand Alone or Series: First book in the Doppelganger duology

Summary: (from amazon.com)
When a witch is born, a doppelganger is created. For the witch to master her powers, the twin must be killed. But what happens when the doppelganger survives? Mirage, a fierce bounty hunter, lives by her wits and lethal fighting skills. She always gets her mark. But her new mission will take her into the shadowy world of witches, where her strength may be no match against magic. Miryo is a witch who has just failed her initiation test. She now knows that there is someone in the world who looks like her, who is her: Mirage. To control her powers and become a full witch, Miryo has only one choice. To hunt the hunter and destroy her.

Why did I read this book: I actually was logging into amazon, when the new releases Warrior and Witch were recommended on my page. After some investigation, I found that both books were previously published with different titles, and came highly recommended by the likes of Rachel Caine and Kate Elliot–two authors I adore. I bought both books immediately!

Judging from the cover of this book (I have the original publication), I wasn’t sure what to expect. It looks kind of The Matrix meets Highlander, and I half expect the cover model to climb onto a Harley or something. Definitely misleading, considering this is actually a strict fantasy novel of the sword and sorcery variety! Cover aside, my interest was piqued by the unique premise. Doppelganger definitely surpassed my expectations, and is a truly wonderful, captivating read.

The story opens in a tavern with a solitary Hunter named Mirage. Mirage is young and the best at what she does–she’s a ruthless, born fighter and highly trained by her Hunter school Silverfire. She’s also restless and incredibly bored with the easy contracts that have come her way of late. So, when her fellow hunter and year-mate Eclipse approaches her with a dangerous mission, Mirage hastily accepts–in spite of the fact that it involves working for witches, whom Mirage cannot stand. The pair rides out to meet their would-be employer, a Fire witch who informs them that the Fire Heart Key Tari-nakana has been murdered. Their mission is to get to the bottom of the crime, to find the responsible party, and report back as quickly and quietly as possible. In order to accept the mission, the witch has the condition that both Mirage and Eclipse must take a blood oath–a magical bond that requires the Hunters to succeed in their mission, or else they will die; with potential for great glory, or ultimate failure. Mirage accepts in an instant, hungry for the challenge.

Meanwhile, Miryo is a student, preparing for her final test and the unblocking of her powers to become a witch in full. When she reaches the final part of her examination, however, she is given earth-shattering news. Miryo is told that she is a full witch, but she cannot use her powers despite having passed the five tests. For Miryo, the journey has just begun.

Every time a witch is born, a ritual is performed to open the child so that she can channel the natural power of the four elements. As a product of this ritual, however, a doppelganger is created. It is the mother’s duty to kill the doppelganger on the fifth night, before it has bathed in starlight–before it has a soul–thus ensuring the witch-child will be able to come into her full powers once she is of age. Miryo is told that for some reason, her doppelganger is still alive–and the only way Miryo will safely be able to use her powers (and in fact, the only way Miryo can survive as the pressure to use the magic that flows around her grows with each passing day) is to find her doppelganger and kill her with her own hands.

And thus, Miryo and Mirage’s stories converge–as both witch and doppelganger are thrown headlong on a dangerous path that will challenge everything they know.

Doppelganger is a very strong story, and it is hard to believe that this is Ms. Brennan’s debut novel. The world she creates here, drawing on the more traditional Western European woods and village settings so prevalent in the s&s fantasy genre is nicely tweaked with the use of what almost feels like Japanese-inspired system of rival assassin clans and names. The system of magic in this universe also draws from tradition as it is rooted in the four elements–earth, air, fire and water–but also with a very important fifth element known as the “void”. While all witches have control of the natural elements, it is the fifth that they do not understand–the void that is the equal but opposite force, negating the elemental magic that flows through each witch. Another interesting way to spin a more garden variety power hierarchy.

Really, it is the premise–a doppelganger with a soul and mind of its own, not some hollow “evil twin” story–that sucks readers into the story. The early chapters alternate between Mirage and Miryo’s stories, creating an exciting dynamic as each character learns a little bit more, and they get closer to their eventual meeting. This clever choice in terms of writing style also gives readers equal footing with both Mirage and Miryo, allowing the characters to be perceived as two separate, sympathetic entities (as opposed to just telling the story from Miryo’s perspective as she hunts down her undeserving duplicate). In fact, the book begins with the titled doppelganger’s point of view–an ingenious decision by Ms. Brennan–hammering home this notion that one of them is not “better” or more deserving than the other. Both characters are fully fleshed out and believable–I loved the contrast between the more gentle (yet determined) Miryo and the fierce, ballsy Mirage. I found myself drawn to both characters, and on the edge of my seat wondering who–if anyone–would ultimately prevail. While these two protagonists were well developed, I felt some of the secondary characters and villains could have used a bit more detail. I wanted more of Mirage’s year-mate and friend Eclipse in particular–besides being a loyal friend to Mirage, I wish there could have been more of his thoughts, any doubts and/or concerns he may have had, etc. As is, Eclipse is written as an unfalteringly loyal side-kick type of character, but with flashes of potential to be much more–something I hope that is explored more in the next book.

Doppelganger moves at a brisk pace, uncovering clue after clue leading to the ultimate clash between witch and warrior–but I was a bit disappointed that after pages and pages of tension, sideplots and intrigue things wrapped together so quickly and tidily. Still, there is a lot to look forward to and a sufficient amount of loose ends to take care of in the second part of this duology. I am excited to see how the next chapter of Mirage and Miryo’s story plays out in Witch–I am certain there are going to be some serious implications after the dramatic conclusion to this book.

There was nothing. Not only was the Hall gone, and the Primes who stood in it, but nothing came to replace it. There was no wind, no images, nothing at all. Miryo had been struck deaf and blind–more, even: her skin felt no sensations, she smelled no odrs, even her own sense of her body was gone. There was nothing.

And Miryo knew it was the Void, but even that thought would not come, would not form in the emptiness. There was nothing.

Her heart would have beat faster, had she a heart. She would have been terrified, had fear been able to exist. Her mind, were it not gone, would have dissolved into shrieking insanity. But it was gone, they were all gone; there was nothing except the Void, and the Void was nothing.

Her scream rang in the vaulting of the Hall.

Additional Thoughts: A doppelganger is a widely shared myth across cultures, although taking its name from German. The term has a universally negative connotation–as doppelgangers (or doubles) are bad omens of illness, ill luck, or even death. Perhaps the most famous case of a doppelganger is that of U.S. President Abraham Lincoln. Across most fictional invocations of the myth, doppelgangers are almost uniformly evil–which makes Ms. Brennan’s story all the more unique and enticing, as Mirage is not some heinous copy of her counterpart Miryo.

And for those X-Files fans out there, you might recall the episode “Fight Club” (yes, the one with Kathy Griffin…times two) where the closer the two doppelgangers come to each other, chaos ensues. 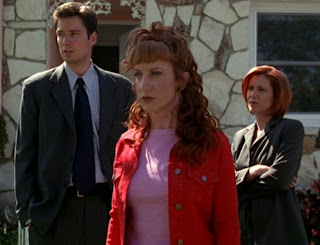 Over at Kirkus: STAR WARS Dark Disciple by Christie Golden