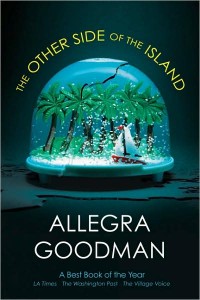 Title: The Other Side of the Island

Honor and her parents have been reassigned to live on Island 365 in the Tranquil Sea. Life is peaceful there—the color of the sky is regulated by Earth Mother, a corporation that controls New Weather, and it almost never rains. Everyone fits into their rightful and predictable place. . . .

Except Honor. She doesn’t fit in, but then she meets Helix, a boy with a big heart and a keen sense for the world around them. Slowly, Honor and Helix begin to uncover a terrible truth about life on the Island: Sooner or later, those who are unpredictable disappear . . . and they don’t ever come back.

Why did I read this book: I’ve had this book on my TBR for a while. I’m always on the lookout for a new post-apocalyptic/dystopian novel, especially of the environmental persuasion. The Other Side of the Island definitely fits the bill!

In the years after the world has been ravaged by global warming, pollution and war, peace has emerged in the form of Earth Mother. With her message of Peace, Love and Joy, Earth Mother has brought blessed Stability to a flooded, weather-beaten world. With color-overlayed skies, her ‘ceiled’ and controlled islands remain safe from savage, fierce weather wrought by climate change. While Earth Mother’s world is Safe and Secure, it also has a number of very strict rules to ensure that it stays that way. Each family is allotted a single child, and must pick that child’s name from a preselected list with a birth-year first letter. Each child must pass rigorous examination in order to attend school. Curfew is enforced every night, credits are assigned books are regulated, and everything is ordered. Predictable. Safe.

Except, when ten-year old Honor and her parents move to Island 365, relocated from their home in the wilder, uncharted Northern Islands, they don’t fit in. Honor’s name, with its silent “H” stands out to her classmates, as does her general deficiency in knowing Earth Mother’s official prayers, creeds and history. Honor’s parents break curfew amongst other rules – singing to their daughter, and even having an unheard of second child.

Honor, desperate to fit in and be liked by her fellow classmates, is ever-conscious of how awkward she and her family are – how they do not fit in the predictable, desirable mold as decreed by Earth Mother. Dismayed and frightened by her parents’ behavior, Honor decides to take matters into her own hands before she becomes a complete pariah at school…but then the unimaginable happens. Her parents are Taken, leaving her an Orphan. No one knows what happens to people that are Taken, but Honor and her friend and fellow Orphan Helix are determined to find out.

I’m getting into these environmental catastrophe/apocalyptic dystopias, and Allegra Goodman’s The Other Side of the Island certainly fits the bill. An effective story about control, misinformation, and – as with many dystopias – the best intentions gone awry, this novel is certainly readable, if familiar. The future world, Earth Mother’s paradise, is a highly regulated, efficient machine. Sky color is regulated by projectors, and humans are controlled and steered away from unpredictable behavior – the implication of course being that human unpredictability leads to pollution, conflict and the demise of the planet. The question, then, posed by The Other Side of the Island is how far must humanity, must the planet itself be controlled? And at what cost? The extent of Earth Mother’s control is chilling stuff – chunks cut from books, names preselected and approved, citizens drugged and regulated to the point where art, different methods of counting, and songs are outlawed.

Although the novel makes a gallant effort at a range of motifs – familial love and duty, for example – many aspects came across as implausible and heavy-handed. Borrowing heavily from other novels (substitute Earth Mother for Big Brother), The Other Side of the Island doesn’t really come close to the moral complexity or subtlety of its numerous predecessors, such as Lois Lowry’s The Giver or George Orwell’s 1984. The convenience of memory-drugging citizens is a bit too simplistic for my tastes, and certain key details (Helix discovering lost pages of The Wizard of Oz or The Bridge to Terabithia, or Honor bizarrely learning to count in base two only to later use that as a secret code) are just a little too fortuitous for my liking. From a logistical standpoint, I found myself unable to suspend disbelief with just how solidly Earth Mother’s grip was on society (drugs can only get you so far), and certain details – tree climbing octopi? beacon colored/projected sky? – were left distractingly unexplained and, well, implausible. In addition, the novel does show a tendency towards Class Lesson Info Dumping (on a level almost as notorious as Teri Hall’s The Line), which is a HUGE pet peeve. And, from a thematic standpoint, the conflict and the dividing line between the “good guys” and “bad guys” is similarly blatant. Ultimately, the central thematic conflict boils down to a question of SAFETY versus LIBERTY (see the Notable Quotes excerpt below), which translates to a simple message (i.e. Totalitarianism BAD! Freedom GOOD!). Complexity? Not so much a huge priority in The Other Side of the Island.

That said, the greatest strength of the novel lies in Honor’s characterization and narrative. As with most young children, Honor’s first priority when she and her family move to Island 365 is to fit in – even if it is at the expense of others. Her desires to make friends, to be Predictable and Good (note the caps) are the impetus behind the first half of the novel, and when it all goes to ground after Honor inadvertently draws attention to her family’s…unconventionalism, Honor’s journey of realization and her resolve to discover the truth is a gripping thing. I loved the reversal here, because so often it is the parents that are the slaves to the system, too old or too afraid to break from the shackles of their dystopian societies. In The Other Side of the Island, however, Honor is the one that is too scared to rebel, and it is her parents that fearlessly rise up. It’s an interesting way to turn a trope on its head, though I’m not certain ultimately how effective it is (as I’m a fan of the immutable, brave young hero).

The bottom line: The Other Side of the Island is a solid read. It’s nothing particularly new or memorable, but with an interesting reversal of character and a fittingly chilling totalitarian society, this is a book certainly worth at least checking out for the dystopian fan. Younger readers or those not so deeply-versed in the dystopian canon will most likely enjoy this book more fully.

Notable Quotes/Parts: No official excerpt is available online, but here’s a snippet from the book (that I think highlights the style of the novel pretty well):

“The Flood destroyed the ancient world,” Honor recited to the class. “Where there were continents, only islands are left. Where there were archipelagos, only mountainous islands remain. After the Flood, and the wars that followed, Earth Mother organized the Great Evacuation to the remaining islands in the Tranquil Sea. Then the Earth Mother rose up and spoke. ‘What is freedom? What is choice? Words and only words. We need Safety. We need shelter from the elements. Without shelter all other words are meaningless.’ Earth Mother pledged to Enclose the Polar Seas. She pledged to establish New Weather in the North and reclaim the islands there, one by one. Finally, she pledged to make a new world in the islands of the Tranquil Sea, islands she numbered and named the Colonies.“

Additional Thoughts: Author Allegra Goodman does have an interesting piece at her website about the backstory for The Other Side of the Island – which you can read HERE.

Reading Next: How I Live Now by Meg Rosoff