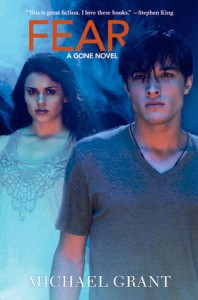 Despite the hunger, despite the lies, even despite the plague, the kids of Perdido Beach are determined to survive. Creeping into the tenuous new existence they’ve built, though, is perhaps the worst incarnation yet of the enemy known as the Darkness: fear.

Stand alone or series: Book 5 in the Gone series

Why did I read this book: Are you kidding me? This series is probably my current running favorite YA series, period. These books are horrific, action-packed, and awesome in the extreme – in short, I LOVE THIS SERIES. When I received a copy of Fear in the mail, I may have done a banana dance.

It has been four months since the dramatic events of Plague – after a superflu has ravaged the children of the FAYZ, after Sam and his crew have found an alternate source of freshwater up by the lake, and after the remaining survivors have split into two distinct groups. Perdido Beach now belongs to the self-appointed “king” Caine, who rules with brutality, with the wary backing of the business-minded Albert. Meanwhile, Sam and the rest of the crew (including the now pregnant Diana) have moved up to the Lake, creating a secondary settlement, with one exception. Astrid – the genius, the saint, Sam’s long-term girlfriend – has left the group to live on her own for four long months, as penance for sacrificing her younger brother Petey in a desperate attempt to end the nightmare of the FAYZ once and for all.

But nothing has changed. Even with the unparalleled, immensely powerful autistic Petey gone, the barrier still remains, separating the children of the FAYZ from the outside world. To atone, Astrid leaves the group for four long months, learning to fend for herself and to make peace with her decisions. But then she notices something that cannot be ignored, and Astrid must return to the group, to Sam, to prepare everyone for the fear of what lies ahead.

Because the FAYZ is changing.

A dark stain spreads along the barrier.

Soon, the stain will cover the entire dome, leaving all of those within its confines eternally deprived of light. Without light, there is no food. There is no hope. There is only fear.

Sam and his friends know that this change can only mean that the FAYZ is entering its end game. And in the darkness, the evil known only as the Gaiaphage lashes out, making one last desperate play for the lives of everyone imprisoned within the FAYZ.

The penultimate novel in the Gone series, Fear is a terrifying, maddening rush of a book. There’s a palpable feeling of impending doom throughout this latest installment, and just like the kids of the FAYZ readers can also sense that the series is reaching its frenetic peak; we can sense that the end game is near, though like Sam and Astrid and everyone else, we are almost completely in the dark as to what shape that end game will take.

Damn, but I love this series.

It’s hard to write a review for a new book in the Gone sextet. If you’ve read this far along, you know this series is unflinchingly brutal. You know that murder is commonplace, that horrific mutations are par for the course, and that power struggles between the different factions within the FAYZ are secondary to the terror that is inspired by the Gaiaphage and his loyal servant Drake/Brittney. In Fear, stakes are escalated yet again. The driving force of this novel is the essence of fear itself, with the impending neverending darkness that threatens the FAYZ – which means a slow death by starvation, as no food will grow, no fish can be caught, and children will turn on each other, burning down whatever they can to create light. The other fear, however, is within certain characters. This time around, Penny, the sadistic girl who can make realistic hallucinations that can break a person’s mind, gets a leading role. I love that we learn about Penny from her perspective and we gradually understand why she has become this broken, insane girl bent on hate and pain. She’s a formidable villain, and her end in Fear does NOT bode well for the remaining survivors of the FAYZ. Let’s just say, Whip Hand Drake now has some competition for most terrifying monster.

Fear is also a turning point for a number of our core heroes – particularly for Astrid. THIS is what I have been waiting for from Astrid, an emotional, raw reaction to everything that has happened, and an evaluation of her own choices and position. To this point, Astrid has remained that aloof, untouchable ice princess, and a genius that might be too smart for her own good. The predictable, dichotomous divide between Virgin/Good Astrid and Whore/Bad Diana has always bothered me, but in Fear, things…change. Astrid’s character has gone through the ringer, and she is finally given more depth as a character beyond the sanctimonious girl she has been for most of the series. I like that. A lot. Speaking of Diana, while she takes backseat for much of Fear, her particular arc – that of her pregnancy – is integral to the novel as it builds to its climactic end. Finally, I’d be remiss if I didn’t mention Sam’s own journey. It takes him 4 books to get to the realization that he isn’t a good manager or delegator, but the revelation hits home in Fear. Sam is a warrior, and that he can finally admit that speaks volumes to his growth as a character. So many other characters are appreciated in this book and have grown into their own – I loved Quinn’s role as leader of the fishermen, the change in Lana the healer, and the realization that Dekka has regarding her and The Breeze. Suffice to say, there is a lot of growing up in this book.

From a plotting perspective, there isn’t much I can say specifically without treading in spoiler-infested waters. Petey has disappeared, but isn’t truly gone; meanwhile something is happening to the Gaiaphage, and to the FAYZ itself. For the first time, in Fear we also get a parallel minor narrative running outside of the Dome, with desperate parents fighting against a military that seems bent on keeping secrets. From the outside, they can also see that something is happening to the impenetrable bubble, and actions are being taken to end things once and for all.

This is a complex story, folks. In many ways, it’s like the much beloved television show Lost, with its ensemble cast, brutality and supernatural slant. And, if you were ever a Lost fan, you know that those writers loved to end on WTF!POLARBEAR-like cliffhangers. Such is Fear.

Needless to say, I loved this book. I loved the growth in characters, the crescendo of terror that builds from page one and the ugly, dramatic showdown that closes out the novel some five hundred pages later. If you have stuck with the series this far, you are in for one hell of a ride. Absolutely recommended, and in the running for one of my favorite novels of 2012 thus far.

The countdown begins to the ultimate novel, Light. I cannot wait.

Notable Quotes/Parts: You can read the first 113 pages of Fear online via Harper Collins’ Browse Inside feature HERE. Check it out.

Reading Next: The False Prince by Jennifer A. Nielsen