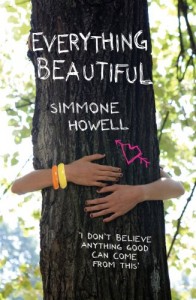 Summary: Riley Rose, atheist and bad girl, has been tricked into attending Spirit Ranch, a Christian camp. There she meets Dylan Kier, alumni camper and recent paraplegic, who arrives with a chip on his shoulder and a determination to perfect all of his bad habits. United in their personal suffering and in their irritation at their fellow campers, they turn the camp inside out as they question the meaning of belief systems, test their faith in each other, and ultimately settle a debate of the heart.

Why did I read the book: I received an unsolicited copy of the book from the publisher in the UK

Riley Rose is dumped by her father and stepmother at the Spirit Ranch Holiday camp where she has to spend one week whilst they go on a much needed holiday, away from the family’s troublemaker. Riley is not very keen on spending a week at a Christian camp. For starters she doesn’t believe in God. Plus, she likes to drink and to have sex and she really wants to go to Ben Sebatini’s party to do all of the aforementioned. Good thing that her best friend and partner in crime Chloe, got her a bus ticket out of the there and all she has to do is to get by for a couple of days and then find a way to take that bus on Wednesday.

Armed with a manifesto that says:

and with her self-confidence and smarts, Riley is determined to be different and self-sufficient. But then there are all of these activities she has to attend and gasp, participate on. There are these other kids, most of them bullies, the majority old-timers at the camp and they all know each other. Riley at first seems to be the odd one off: a troubled teenager (ever since her mother died two years ago – Riley has yet to cry over her loss), living in excess with not only the sex and the drinking but also the eating: Riley is fat. She weighs 82 kilos, with a wobbly belly and big boobs but she has no problems with showing these off. Quite the contrary, if there is one thing to be said about Riley is that she knows how to use her strongest features.

But the more time she spends at the camp, the more she realises she is not alone and her determination of not getting involved starts to erode as she gets to know kids like the repressed Sarita, her roommate and the siblings Olive and Bird. And then, there is also the boy in the wheelchair, Dylan Luck, who used to be the one of the fittest guys in the camp and a bully on top of that and who is now struggling to come to grips with his new reality.

This is unlike any YA books I have read recently if ever. Not only because of the lack of supernatural elements but because it actually falls in the direct opposite end of the spectrum with very real, down to earth, elements: not only grief and death, and the need to come to grips with the hardest facts of life but it also deals with less-than-perfect people with less-than-perfect lives, from the boy who lost the use of his legs, to the girl that is overweight and cannot cry.

There is drug and alcohol use and underage sex. One of the strongest positives about Everything Beautiful is how the latter is not portrayed as something bad in itself – sex can be good even when you do it for the wrong reasons. And even then it is not really about the fact that you had sex but mostly about the state of mind behind the reasoning. Riley is a very experienced young girl who uses sex as a self-esteem boost but she is not judged for it, nor does she have qualms about it. It is just the way it is – but it did my heart good to see her having sex with someone she truly liked and had a connection with. She is also very responsible and adamant in having safe sex always – Riley may be many things but she is not an idiot and for that I am extremely grateful to the writer.

I had zero expectations about Everything Beautiful as I haven’t seen this book reviewed in any of the blogs I regularly read. In all honesty, I am not even sure why I decided to read it. I do like the cover but after reading the blurb, I was afraid that I would be preached at given the setting of the book. What really matter is that I did pick it up and I am glad that I did so: the book turned out to be an immensely enjoyable, intelligent read, with no preaching whatsoever. Quite the contrary, there is an ambiguity about the characters in Everything Beautiful which makes it well, beautiful to read. Even characters that at first appeared to be mere caricatures gained depth by the end of the book.

Above all, I just loved the fact that Riley does not go through a Revelation, does not “learn” a lesson. There is no great change by the end of that week – the world doesn’t all of a sudden become a great place nor do these kids become something they are not when the book opens. What does, very realistic, happen is that this one week, opens up the possibility of change, shows new ways but they do not come miraculously from Above – they come from inside, from relating to the other. It offers the chance of starting to heal what is broken. Friendship, a possible relationship, all is there for Riley to take if she wants to. The evidence is right there in the end, when Riley works on her manifest and edits it – edits it – she does not delete it all and starts from scratch.

As I am writing down this review more than two weeks after finishing reading this book, it strikes me how fresh my memory of the story is – but not in a “I remember all the details” kind of fresh. More like a feeling that I have read something special. Akin to how I remember those small, contained movies such as Little Miss Sunshine which rarely offer any grandiose answer to questions about life, the universe and everything but rather shows a glimpse into the life of its fascinating characters. I have a fondness for movies like those and I now have a fondness for Everything Beautiful.

It goes to my keeper shelf.

Notable Quotes/ Parts: I loved Riley and Dylan’s trip to the desert (the book is Australian , by the way) and this is an excerpt:

“What was it about the desert that left me stumbling for words? Words were human tools – but this….this vision had nothing to do with us; it had occurred in spite of us. I felt like I was trespassing. I was a rude speck on an ancient tapestry. Then I felt grateful. I wasn’t sure to whom – God or Buddha or the Big Bang – but while I stared, while there was no past or future, just the sky and the lake, I felt that I had been let in on some kind of Utopia. In a matter of minutes, as the sun continued to rise, the brilliance died – like everything beautiful had to.”

Additional Thoughts: I have a problem with the cover of the Hardcover edition (published by Bloomsbury USA): 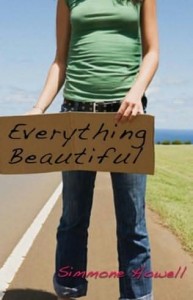 Is this supposed to portray, overweight, big girl Riley? Really?

I much prefer the UK paperback cover (top of the post) or the Australian cover below. 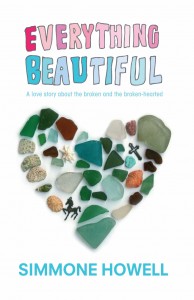 Verdict: a great YA read, with its share of funny and sweet moments without shying away from conflict, sadness and questioning. I loved Riley and I loved Dylan.