Title: The FitzOsbornes in Exile 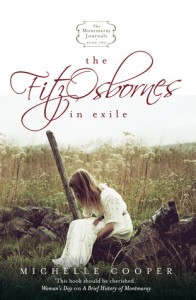 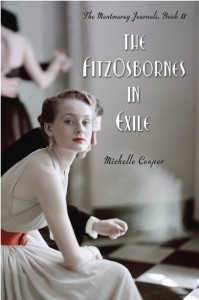 Michelle Cooper combines the drama of pre-War Europe with the romance of debutante balls and gives us another compelling historical page turner.

Sophia FitzOsborne and the royal family of Montmaray escaped their remote island home when the Germans attacked, and now find themselves in the lap of luxury. Sophie’s journal fills us in on the social whirl of London’s 1937 season, but even a princess in lovely new gowns finds it hard to fit in. Is there no other debutante who reads?!

And while the balls and house parties go on, newspaper headlines scream of war in Spain and threats from Germany. No one wants a second world war. Especially not the Montmaravians—with all Europe under attack, who will care about the fate of their tiny island kingdom?

Will the FitzOsbornes ever be able to go home again? Could Montmaray be lost forever?

Stand alone or series: Book two of the Montmaray Journals

Why did I read this book: I loved A Brief History of Montmaray, the first book in this trilogy. When I realized that The FitzOsbornes at War was forthcoming this fall, I had to hurry up and review this middle volume.

**WARNING: This review contains unavoidable spoilers for the first book in the Montmaray Journals trilogy! If you have not read A Brief History of Montmaray and want to remain unspoiled, look away! You have been warned.**

January 1937. The FitzOsbornes have narrowly escaped their beloved home Montmaray with their lives, and have taken refuge with their only surviving relative, Aunt Charlotte (aka the Crown Princess) in the comforts of her extensive English countryside estate. Here, Sophia, Veronica, Toby, and Harry (and of course, alleged half-brother Simon Chester) struggle to their new lifestyle – the decadence of British high society a far cry from their crumbling castle on the sea. In particular, the three eldest FitzOsbornes grapple with their Aunt’s mission to bring them out into society and quickly marry them off – only to people of quality, of course. While Sophia is, understandably, excited for her new wardrobe and debut as the Season starts, her charming older brother Toby and beautiful cousin Veronica can muster far less enthusiasm. Toby, because he’s already – wildly, inappropriately – in love with Simon; Veronica, because she could care less about being a debutante when the fate of Montmaray is at stake and in the clutches of the Nazis. As the months pass, Sophia and her siblings go through the ups and downs of the English aristocracy, all the while struggling to come to grips with the rising tensions at home and abroad.

All the while, the fate of Montmaray hangs in the balance, and if the exiled royals want to save their sovereign country, they must take action in an increasingly volatile world – as Guernica is decimated, Hitler rolls across Czechoslovakia, and both England and the League of Nations are paralyzed from taking any retaliatory action.

The second volume in the Montmaray Journal trilogy, The FitzOsbornes in Exile is a rare book that manages to blend the lighthearted with grave subject material, alternating between debutante balls and political embroilment. All this, of course, relayed through the candid narration of Princess Sophia’s journal entries. The fact that Michelle Cooper can pull this off is both amazing and effective, allowing readers to connect with Sophia and her family, but also realizing the dark days that are rapidly approaching for the FitzOsbornes and the rest of Europe. There are bits that are frothy and entertaining – as Sophie regales us with tales of her wobbly curtseys, her fear of falling on her face as a bridesmaid at a friend’s wedding, wearing the wrong thing that sets the more vicious young ton ladies atwitter – and her narrative feels wholly genuine, just like a girl would write about in her journal (if you’re a girl and ever kept a journal, you may identify with Sophie’s recordings of hopes and dreams and friends and clothes – I know that I did).

But then, seamlessly, Michelle Cooper switches from parties and chilled champagne to the cold truth of Europe in 1937-1939: assassination attempts, impotent politicians, and an increasingly ominous political environment. Add to this volatile cocktail the author’s tightrope-walking act, weaving a fictional country into the tensions leading up to the collapse of the League of Nations, and England’s declaration of war after years of appeasement! This seemingly impossible feat is accomplished fantastically well, with very little infodumping or contrivance.[1. Ok, almost no contrivance. There was one conversation in particular, about the Maginot Line involving silverware that felt a little obvious and history lesson-ish. BUT, I found it interesting and well done enough to ignore any info-dumpy misgivings (not to mention this whole exchange is likely very helpful for any reader unfamiliar with the attacks, tactics, and advances during the period – particularly young adults that may be reading about the Maginot Line for the first time!).]

The true beating, bleeding heart of this book, however, is Sophia FitzOsborne. My goodness how Sophie has grown in this second book! Her voice and keen (but seemingly offhand) observations are what drive A Brief History of Montmaray, and in The FitzOsbornes in Exile, we watch her mature not only in writing style and narrative voice, but as a character, too. Sophie, as you may recall, is the evenheaded FitzOsborne that doesn’t think too highly of herself (resigned as a perennial wallflower), but isn’t annoyingly self-deprecating or petty. She references Jane Eyre on occasion in her journals, and the allusion is apt – you can feel Sophie shares Jane’s passion and compassion, bubbling, writhing beneath her calm exterior. As the years pass and Sophie grows from a 16 year old to an older and wiser 18 year old, her journal entries stray less towards girlish infatuation (with someone who likely will never return her attention, seeing as he was her brother’s paramour), to fears for her family, for her nation, and fort he frightening prospect of things to come.

Of course, the other Montmaravian royals are present and wonderfully drawn in this second book, too, painted sympathetically by Sophie’s pen. Veronica is the same headstrong, brilliant, passionate woman that speaks her mind (and has a heartfelt, beautiful speech at the end of the book), Toby is the same infuriatingly charming wastrel, spoiled yet endearing in his own way because of his big heart. Harry, who also grows in this book, is delightful as always, leading a squadron of Basque children refugees and becoming a scout leader with a penchant for mischief and archery (this will make sense when you read the book). And of course, Simon Chester is there too – breaking Toby’s heart with his indifference (and pursuit of glamorous women), frustrating Veronica with his superiority, leaving Sophie to mediate the mess. We’re also introduced to the FitzOsbornes’ matriarch, Charlotte, who is more of a caricature as the overly-dramatic aunt, keen to marry off all of her nieces and nephew and see them situated in good society.

My only particular quibbles with this second book – which overall is better than the first, in my opinion – are twofold. First, the sense of time passing and pacing is a little slow, and a little dragging in this second book. While Ms. Cooper does a phenomenal job of blending the light with the heavy, reading about such and such garden party or chicken luncheon can be slightly tedious (especially when there is a Deranged Assassin on the loose and the fate of Montmaray is ignored for so long!). The second quibble is meatier and a slight spoiler – so look away if you don’t want to know:

The integration of Montmaray as a possible catalyst/role player in key events leading up to England’s participation in the war left me feeling a little uncomfortable. There’s the implication that Montmaray was (possibly) the landing base for the bombing of Guernica, for example (and the destruction of Montmaray was, apparently, the test run for Guernica! AND Guernica may have been bombed because of the help of a Basque Captain in rescuing the Montmaravians!). And then later in the book, we see this again with Montmaray’s appeal to the League of Nations – which is unanimously approved!!!!- to condemn Germany’s aggression. This type of revisionist history makes me feel conflicted, to say the least.

All this said, I truly, wholeheartedly enjoyed this book and I eagerly await the third and final volume of the Montmaray journals with The FitzOsbornes at War. If you haven’t read this series yet, I highly recommend it.

Notable Quotes/Parts: From the official excerpt – with the following context:

Their Royal Highnesses, Princesses Veronica and Sophia of Montmaray, accompanied by the Princess Royal, Princess Charlotte of Montmaray, have arrived at Montmaray House in anticipation of the Season.

It seemed an extraordinary thing for The Times to print on their front page – who on Earth would care? (Especially as hardly anyone here seems to know where Montmaray is, let alone what’s happened to it. Toby says that people at school were always mistakenly thinking he came from Montenegro or Montserrat, or getting him mixed up with Prince Rainier of Monaco.) But then this morning, an absolute avalanche of envelopes descended upon Montmaray House. Advertisements from dress shops and tea shops and businesses that hire out gilt chairs and marquees; offers of free sittings with photographers; letters from dance schools and florists and ‘hair artistes’. And then there were the invitations.

‘What’s a fork luncheon?’ asked Veronica, staring at one engraved card as we sat around the breakfast table. ‘And who’s Mrs Douglas Dawson-Hughes, and why would she invite us to one?’

‘We’ve got eleven invitations to tea parties,’ I said, counting. ‘One of them promising consultations with “Madame Zelda, the famous fortune teller”.’

‘She can’t be all that famous, if they need to explain who she is,’ said Veronica.

Over at Kirkus: Noumenon by Marina J. Lostetter