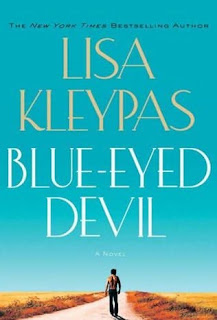 Stand alone or series: Second book in the Travis’ series by Kleypas

Summary: “Blue-Eyed Devil” is the story of the charming, volatile and ambitious Hardy Cates, who is determined to carry out his private revenge against the Travis family. Haven is the rebellious Travis daughter who struggles against her overpowering attraction to the most dangerous man in town. But when Hardy crashes a Travis family wedding, the heiress and the bad boy uncover an explosive chemistry that neither of them can deny. Hardy Cates is an unscrupulous rascal, but now he’s trying to clean up his act. He is looking for the perfect society wife, the kind of woman Haven Travis could never be. Having once been burned by a love affair gone wrong, Haven vows to stay far away from the sexy heartbreaker. However, Haven discovers that the temptation of a blue-eyed devil is hard to resist. And then when a menace from Haven’s past appears, Hardy may be the only one to save her…

Why did I read the book: Because of the sheer amount of positive reviews.

I was caught completely unawares by Blue-Eyed Devil. I fully expected it to be a good read – it is a Lisa Kleypas after all – but wasn’t prepared for when it turned out to be an amazing book and one that has become one of my favourite romance novels of all time.

This is the story of Haven Travis, told in first person point of view. It begins at her brother’s wedding party – Gage, who is getting married to Liberty Jones, heroine of Sugar Daddy. Haven is attending the wedding with her fiancée Nick but at the reception she can’t help but to notice this guy, this guy with incredible blue eyes. By accident they end up at the dark cellar where Haven mistakenly assumes he is Nick and they end up kissing passionately. She then learns that not only he is not Nick but he is Hardy Cates, the guy who tried to come between Gage and Liberty in Sugar Daddy and who has crashed the reception to tease his enemy. He is invited to leave and we don’t see more of Hardy until much later in the book.

Haven proceeds to marry Nick, against her family’s will and ends up cut off and stranded. Haven starts her life with Nick innocently believing that love conquers all. What comes next in the story was very hard to read. For the next two years, her life is turned upside down when it’s clear that Nick is an abusive husband. Not one of those that are outright violent – at least not at first – but one that, with subtlety, reinforced by a strong personality, shapes Haven’s according to his needs. Little by little, Haven is stripped of her own self, loses her personality and becomes a shadow of her former self. We learn later that Nick has a personality disorder and at that point in time, Haven submits to a relationship where there is no room for dissension; where there is no room for her true self. It was a very difficult relationship to read about – my innards were twisted in agony for Haven and for that feeling of having a destiny you think you cannot escape from. Until something horrid happens, and beaten up and shattered to pieces, with the help of her brothers Gage and Jack, Haven is finally able to get away, to get a divorce and to start over.

Haven begins the story too young, too sheltered and innocent being then catapulted into adulthood and into a harsh reality that messed up with her sense of self-worth and self-preservation. It is a painful, slow journey to recovery for Haven. She needs to re-connect with herself, mind, body and soul. To re-discover who she is, what she likes, to find a job, to reunite with her family, her brothers, undergoing therapy sessions that felt very realistic and finding a new footing in life. And of course, finding true love with a wonderful man helps immensely.

And this is when we break away from romance hell to romance heaven. For Hardy comes back to her life, again by accident. They meet at a bar and they are both reminded of that heated encounter which neither was able to forget. Hardy starts a relentless campaign to date her and at first she is not prepared to get into a new relationship. But Hardy is ever so gentle, patient and the cave woman in me needs to come out and say it: he is also too hot for words.

I was trying to come up with a way to describe Hardy when it hit me like lightening: give or take a few differences, Hardy is a contemporary Derek Craven. A self-made, ambitious man, coming from the gutter, becoming a millionaire and doing anything to get the obstacles out of the way. Raised by an abusive, criminal father, he also has that sense of not being worthy of his heroine. In the end, for a fleeting moment,
there is a near miss into Big Misunderstanding arena avoided at the eleventh hour by a hero that is able to say “I am sorry, I was wrong” and a heroine who is capable of seeing through the barriers he has raised.

And this is where I say Lisa Kleypas is an amazing writer: because she was brave enough to address something new – to write, realistic and graphically, about an abusive relationship and a personality disorder that is more common than any of us would like to think and to give it a fair take: the abuser is a sick person and the abused is not to be judged for enduring it; whilst at the same time being capable of taking one of the biggest clichés of romance as a genre, a too hot-too strong-almost alpha male-millionaire and turn him into a believably real man. For all that he is a staple romance hero he is also the catalyst to mend Haven’s broken soul with his openness, his gentle care and one hero that is fully opened to be mended in return. Does love conquer all? No, I am too cynical to believe that but Blue-Eyed Devil makes me wish I would.

Blue-Eyed Devil, in my most humble opinion is one of those books that begs to be taken from its niche (contemporary) within a distinct genre (romance) and be hailed simply as: literature.

Notable quotes/Parts: So many parts worth quoting: the elevator scene when Hardy is the first person Haven thinks of calling for help and how he came to the rescue; the fact that he went into murderous mood at the sight of someone hurting her. I loved to read about the slow progress of their relationship, how they started to spend more and more together, immersed in conversation. One such talk went like this:

“Ever since I can remember, I wanted to get somewhere, be someone. I’d see other sons of bitches who had it all – an expensive car, a big house, a beautiful woman. And I told myself, “Fuck’em. Someday I’ll have it all too, and I’ll be happy’” His mouth twisted. “but the past couple of years, I finally got the things I wanted, and it wasn’t enough. I was still a miserable bastard. When I’m with you though….”
“What” I prompted.
“When I am with you, I feel like I finally have what I need. I can relax and be happy”

I no longer believed in the idea of soul mates, or love at first sight. But I was beginning to believe that a very few times in your life, if you were lucky, you might meet someone who was exactly right for you. Not because he was perfect, or because you were, but because your combined flaws were arranged in a way that allowed two separate beings to hinge together.

A celebration for Haven, leaving the past behind:

His love came with no strings attached, which I thought was the greatest gift one human being could give to another.
“you know”, (….) “I am just as much me when I’m with you, as I am without you”

Additional Thoughts: sometimes it can be frustrating to read first person narratives, especially when there is a hero one would love to learn more about. “What is Hardy thinking” was my mantra whilst reading BED and then I found this: Lisa Kleypas’ special post at Romance Novel TV where she publishes the first encounter between Hardy and Haven from his point of view. Go forth and read it!

Verdict: One of the best books I have read, romance novel or not. Hardy Cates is tied with another hero (whom you will learn all about in November) as my favourite hero of 2008.

Reading next: Seduce me at Sunrise by Lisa Kleypas.