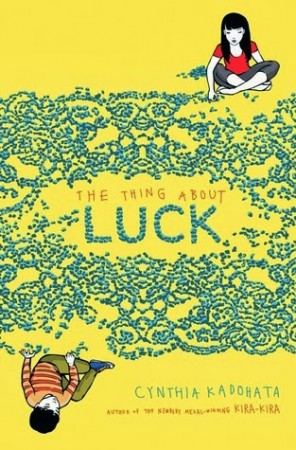 Title: The Thing About Luck

There is bad luck, good luck, and making your own luck—which is exactly what Summer must do to save her family in this novel from Newbery Medalist Cynthia Kadohata.

Summer knows that kouun means “good luck” in Japanese, and this year her family has none of it. Just when she thinks nothing else can possibly go wrong, an emergency whisks her parents away to Japan—right before harvest season. Summer and her little brother, Jaz, are left in the care of their grandparents, who come out of retirement in order to harvest wheat and help pay the bills.

The thing about Obaachan and Jiichan is that they are old-fashioned and demanding, and between helping Obaachan cook for the workers, covering for her when her back pain worsens, and worrying about her lonely little brother, Summer just barely has time to notice the attentions of their boss’s cute son. But notice she does, and what begins as a welcome distraction from the hard work soon turns into a mess of its own.

Having thoroughly disappointed her grandmother, Summer figures the bad luck must be finished—but then it gets worse. And when that happens, Summer has to figure out how to change it herself, even if it means further displeasing Obaachan. Because it might be the only way to save her family

Why did I read this book: This had been on my radar for a while but when it made the National Book Award Shortlist, I decided to read it.

Most twelve-year olds don’t think about death but after catching malaria and nearly dying, Summer Miyamoto becomes especially reflective about her life. One thing that strikes her the most is the thought that her family has been cursed with a difficult stretch of bad luck this year. As if her nearly fatal bout of malaria hadn’t been enough, her brother Jaz is going through a friendless time and her parents had to go back to Japan to help with ailing relatives right at the time when they are supposed to be working in the wheat harvest season to pay the bills.

They leave Summer and Jaz in the care of their elderly grandparents Obaachan and Jiichan who come out of retirement to work for the harvest company. Her grandfather is to work as a combine driver, and her grandmother – through spells of excruciating back pain – is to cook the meals for the workers with Summer as her assistant. The financial well-being of the family and their mortgage repayments depend on the work being completed but custom harvesting is hard, demanding work that take a toll on the youngest members of the team, let alone Summer’s elderly grandparents.

I am not sure I’d categorise The Thing About Luck as a straightforward coming-of-age story although it has elements that fit that narrative. I wouldn’t say that Summer has fully transitioned into adulthood by the end of the book although there is definitely some groundwork there. Rather, I’d call The Thing About Luck a snapshot of a short moment in time when Summer becomes aware of time passing and of the right now. The story involves growing up and self-awareness but it’s also a reflection on the world around her and the challenges her family faces. Summer tells us about custom harvesting, about her new-found obsession with mosquitoes and fear for her self-preservation; about her relationship with her difficult brother and about her relationship with her grandparents.

Summer’s is a charming, meandering narrative that is almost plot-less in its back and forth but her voice never fails to seem authentic in the portrayal of a family who is struggling as they deal with poverty and illnesses. This is a generational work as well and probably the loveliest thing about it is the relationship between Summer, a second generation Japanese-American and her Japanese immigrants grandparents. The book explores really well (I thought), the gap between them, exemplified by Obaachan and Jiichan’s relationship with each other, with the world around them and with their grandchildren. They are old-fashioned and demanding but loving and wise in ways that Summer has difficulty grasping (but which are very clear to the reader).

The biggest growth here though is realising that luck, rather than something that happens to you is something that you can affect and change. It’s no wonder then, that by the end of the book Summer declares her year of bad luck over.

I was half way through reading The Thing About Luck when it won its well-deserved National Book Award for 2013.

Kouun is “good luck” in Japanese, and one year my family had none of it. We were cursed with bad luck. Bad luck chased us around, pointing her bony finger. We got seven flat tires in six weeks. I got malaria, one of fifteen hundred cases in the United States that year. And my grandmother’s spine started causing her excruciating pain.Furthermore, random bad smells emanated from we knew not where. And my brother, Jaz, became cursed with invisibility. Nobody noticed him except us. His best friend had moved away, and he did not know a single boy to hang around with.

Even our cousins looked the other way when they saw him at our annual Christmas party. They didn’t even seem to be snubbing my brother; they just didn’t see him.The thing about luck is that it’s like a fever. You can take fever meds and lie in bed and drink chicken broth and sleep seventeen hours in a row, but basically your fever will break when it wants to break.

Reading Next: Twinmaker by Sean Williams

Middle Grade Review Bonanza: The Wolves of Willoughby Chase by Joan Aiken, Permanent Rose by Hilary McKay, and From the Mixed-Up Files of Mrs. Basil E. Frankweiler by E.L. Konigsburg