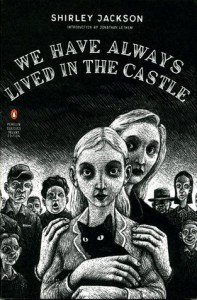 Title: We Have Always Lived in the Castle

Merricat Blackwood lives on the family estate with her sister Constance and her uncle Julian. Not long ago there were seven Blackwoods—until a fatal dose of arsenic found its way into the sugar bowl one terrible night. Acquitted of the murders, Constance has returned home, where Merricat protects her from the curiousity and hostility of the villagers. Their days pass in happy isolation until cousin Charles appears. Only Merricat can see the danger, and she must act swiftly to keep Constance from his grasp.

Why did I read this book: I recently read and LOVED The Haunting of Hill House and after that I had to read Castle, which I was told was even better, as soon as possible.

It could be argued that We Have Always Lived in the Castle is a book chiefly about routine – routine that is painstakingly described by its narrator Mary Katherine “Merricat” Blackwood and thoroughly adhered to by her and those she shares her life with: her beloved sister Constance, their sickly uncle Julian and even Jonas, the cat.

This daily routine is almost a magical thing for Merricat, source of comfort and power. Certain days of the week belong to cleaning the house as well as making sure that each room remain exactly as they once were. Other days are the days where Merricat ventures outside the boundaries of her house in search of food and books. Those are the worse days: the days when she is taunted by the villagers and where it is made clear that the Blackwoods are others and have always been so.

Their otherness are both real and imagined. There is clearly a distinction of social class and the villagers see the Blackwoods as lofty and separate. The Blackwoods themselves have always thought so as well but the remaining Blackwoods are other for different reasons. Just how much of Merricat and Constance’s strangeness is exacerbated by any external factor is a matter for discussion but there is something clearly broken here. The more time is spent with the Blackwoods, the clearly this becomes and Merryicat and Constance both reveal facets of themselves that are extremely disturbing and even perverse.

The problem is that the villagers – unlike us, the readers –have no way of knowing just the extent of the girls’ strangeness. When they act upon their mistrust, they are acting on their own accord, led by their own prejudices and small-minded persecution. There is horror here but it is a different type of horror than the one that takes place inside the house – and inside Merricat’s point of view.

This juxtaposition of what the villagers know and what they don’t know is only one of the reasons that make this book such a triumph. Merricat’s (extremely) unreliable narrative as well as the book’s ultimate conceptualisation embody perfect storytelling.

We Have Always Lived in the Castle is an incredibly harrowing story because of the former. Something terrible has happened to the Blackwoods 6 years ago and something terrible is about to happen again when the observance of their routine is abruptly interrupted by an unwanted visitor. It starts when Merricat is no longer allowed to go to the village. As we come to realise, this is a person who is completely unable to change – the Blackwoods live suspended in time and the biggest indication of that is how Merricat’s voice is that of a much, much younger girl than she is supposed to be. These girls have not grown at all and their carefully maintained lives are only possible because of that. The reasons why are open for interpretation.

The latter – the book’s brilliant framing – is exemplified by the narrative within narrative as Uncle Julian tries to organise and retell those events that took place six years before. But above all in the way the story progresses and eventually culminates in a perfectly shaped fairytale: the type that horrifies but also presents no excuses for its horror. The type that sees its roots in oral storytelling (this might be a written story, but Merricat is telling us her story in a most traditional way) as it grows and transforms in time. The ending encapsulates this perfectly.

I admit that this review is a rather cryptic one in terms of how I have refrained from talking about specific plot details but believe me when I say this is for the best. [1. I’d note that in certain editions of the book there is an introduction by Jonathan Lethem that to my dismay, completely and utterly spoils the story. I suggest you don’t read the introduction before reading the book like I unfortunately did . But do go back to it later]

There are definitely thematic parallels between this and the The Haunting of Hill House as well as the psychological horror that fuels the narrative. But it is the narrative in the two books – how engaging and unnerving they are – that brings both books together and which makes me say, without hesitation, that Shirley Jackson has blown my mind away. And I am so happy to have finally discovered her books.

My name is Mary Katherine Blackwood. I am eighteen years old, and I live with my sister Constance. I have often thought that with any luck at all I could have been born a werewolf, because the two middle fingers on both my hands are the same length, but I have had to be content with what I had. I dislike washing myself, and dogs, and noise. I like my sister Constance, and Richard Plantagenet, and Amanita phalloides, the death-cup mushroom. Everyone else in my family is dead.

Joint Review: Worldweavers – Gift of the Unmage by Alma Alexander