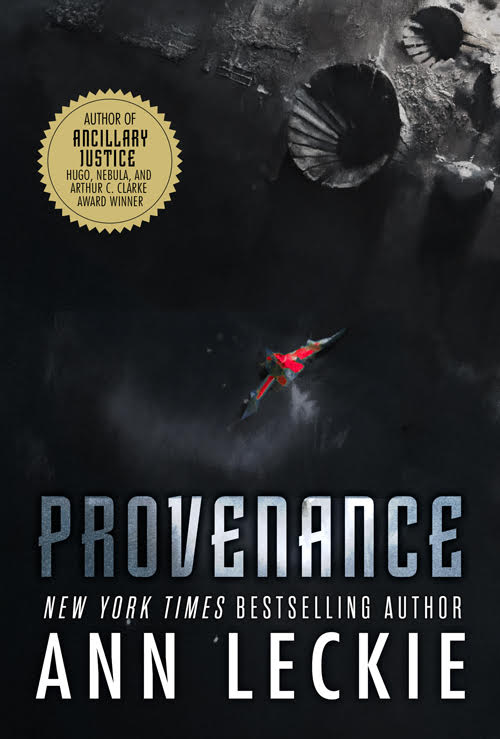 A power-driven young woman has just one chance to secure the status she craves and regain priceless lost artifacts prized by her people. She must free their thief from a prison planet from which no one has ever returned.

Ingray and her charge will return to her home world to find their planet in political turmoil, at the heart of an escalating interstellar conflict. Together, they must make a new plan to salvage Ingray’s future, her family, and her world, before they are lost to her for good.

Stand alone or series: Stand alone but set in the same world as the Ancillary novels

It starts with the Worst Plan Ever: a young woman named Ingray, desperate for her mother’s approval (and to potentially be named her heir) uses the last of her money to smuggle out the infamous thief Pahlad Budrakim from a prison planet so that e can tell her where e has hidden precious artefacts stolen from a powerful family. This plan relies heavily on bribery, coercion and the hope that everything will run smoothly. It doesn’t. Not only that, but Pahlad insists that those precious artefacts? Are worthless.

You see, in these parts of Ann Leckie’s world – Hwae is a planet far far away from the adventures of Breq and company – Vestiges are the most important items a person, a family, and their society can have. From small signed mementos to important documents that hold their culture together, these Vestiges are history. But Pahlad insists that not only most of these are fakes but also that to those from outside Hwae, they are a joke.

But for Ingray and her family, provenance is everything.

Back to her home world – destitute and close to despair – Ingray and her new friends (Pahlad and Tic, the captain of the ship that transports them back home) find a planet in political disarray. And when an important political envoy is murdered and Pahlad framed for it, it will take all of Ingray’s acumen and Tic’s tech knowledge to come up with even more outrageous plans to sort it all out.

A comedy of manners, a space adventure and a heist, Provenance is Ann Leckie’s new stand-alone novel. Comparisons are of course inevitable – not only because of the success of the author’s previous trilogy but also because this stand-alone novel is set in that same world. While there are reverberations from that first trilogy happening in the wider political background (the Conclave is going to happen soon, news of AIs trying to become independent are now reaching Ingray and her world), Provenance is very much its own thing, a self-contained, fun, light, funny novel. In many ways, arriving here feels inevitable – part of a journey that started with Ancillary Justice: every subsequent novel in that world became smaller and smaller in scope, with the last novel firmly telling what felt to me, a very personal story.

Thus, Provenance feels very much at home with me, a welcoming, nurturing, comforting, appealing novel that focuses a lot on found families, on determining one’s place in the world. It is above all, the story of two individuals – Ingray and Garal (Pahlad’s new chosen name, the question of identity becoming ever larger) who find themselves in circumstances beyond their control, having to do their best.
Each having to navigate the murky waters of family relations: Garal deals with untold betrayals and Ingray with untold expectations.

Provenance plays an even larger role than the one played by the Vestiges: Ingray is a foster child from a public creche and her powerful mother never lets her or her brother (another foster child, but from a powerful family) forget this. Ingray’s desperate makeshift plan is just that: a desperate ploy to win the affection of her mother and to prove her worth. Even when she doesn’t quite believe herself she has any. Ingray’s development and growth as character and to examine all sort of internalised self-rejection is really well done here. All the more so because Ingray doesn’t immediately transforms into a self-assured, kick-ass character. Quite the contrary, even throughout the climax, as she fights for her life and to save the lives of others, she does so through fear, tears and sweat. I haven’t seen a female character such as this in a long time, a character who is allowed to feel conflicted, fearful and I really did love how the author portrayed Ingray.

Provenance also shows a different background to its predecessors in the way that culture, history, language and gender are represented. In Ingray’s world, a person decides which gender identity they are, for example. Further, the examination of history, provenance and archaeology through the very existing of the Vestiges was super fascinating. Ingray knows those Vestiges are fake: do they make them less relevant or important? Does it matter?

Perhaps the only “negative” thing about Provenance is that it is too short and there wasn’t near enough of the secondary characters (and the lovely romance between Ingray and her female BFF) to slake my thirst for them. Still, : Provenance is a super great novel and a great example of optimist, fun Science Fiction.

Additional Thoughts: We had a chat with Ann Leckie about her books, about Provenance, about her place in SFF and more. Coming up on Thursday this week!

Book of the Month: Touch the Dark