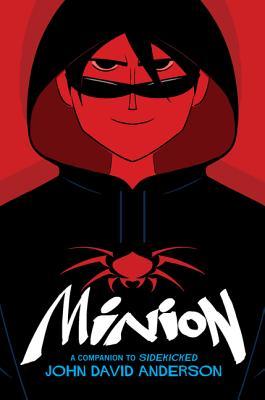 John David Anderson returns to the world he created in Sidekicked with an entirely new cast of characters-this time the villains-in a funny and emotional companion to his first breakout tween novel.

Michael Morn might be a villain, but he’s really not a bad guy. When you live in New Liberty, known across the country as the City without a Super, there are only two kinds of people, after all: those who turn to crime and those who suffer. Michael and his adoptive father spend their days building boxes-special devices with mysterious abilities that they sell to the mob at a price. They provide for each other, they look out for each other, and they’d never betray each other. In New Liberty, a city torn apart by the divide between the rich and the poor, the moral and the immoral, this is as much of a family as anyone could ever hope for.

But then a Super comes to town, a mysterious blue streak in the sky known only as the Comet, and Michael’s world is thrown into disarray. The Comet could destroy everything Michael and his dad have built, the safe and secure life they’ve made for themselves in a city where safety and security are scarce. And now Michael and his father face a choice: to hold tight to their life, or to let it unravel.

John David Anderson, author of the acclaimed Sidekicked, has written another story set in an America where superheroes and supervillains are commonplace, but where the line between right and wrong, good and evil, is still not any less elusive.

Stand alone or series: Companion novel to Sidekicked (but can be read as a standalone)

Why did I read this book: I thoroughly enjoyed Sidekicked, and was thrilled when I learned that there would be a companion novel set in the same world. I was even more ecstatic when I found out that the companion novel would follow a supervillain (if you could call him a villain).

“Boxes are marvelous things, Michael. There is a moment, just before you open one, when a box contains anything, when it could be anything. And even though you know it’s not true, you still imagine that one day you will find a box that holds the exact thing you’ve been looking for, the thing you’ve wanted most of all.”

Michael isn’t a “good” guy, but he knows that the line between Good and Bad is far less defined than most people pretend. And for a kid who was abandoned in the back of a White Castle as a baby and raised in a Catholic orphanage, Michael’s handling his power as best he can. One day, the young orphan’s life changes when he’s adopted by a rumpled man in a loud Hawaiian print shirt – one Professor Edson, who learns about Michael’s unique ability.

With the Professor, Michael finds happiness. Sure, the strange rumpled man in his clashing clothes is a brilliant scientist who spends every second in his locked basement, inventing mysterious devices in boxes… but Michael and his new father form a powerful bond of trust, respect, and love.

The duo of father and son live on the outskirts of New Liberty – Michael is homeschooled year round by his dad and helps him carry out his madcap designs for questionable clients. (This includes robbing the occasional bank for the necessary funds to build said designs. A kid with the ability to convince others to do his bidding is a pretty valuable asset.) One thing the Professor has always told his son is that Michael must never tell anyone else about his power – especially not the mobster types that the Professor works for.

But one summer day, the (relatively) tranquil life that father and son have built is smashed apart with the force of a speeding comet – no, literally, a superhero codenamed the Comet comes to town. Suddenly, the pressure is on New Liberty’s “villains” to step up their game, and when Michael’s abilities are discovered by his father’s employers, things get dangerous.

Michael and the Professor face a frightening choice – to stay, or to run from villains and supers who threaten their lives. One thing is for certain: together, the father and son will do what they must to survive.

“That’s the other thing about boxes,” he said. “You don’t have to open them. It’s your choice. You can stay up here as long as you please. But you should know that if you do open that door, if you look at what’s inside, things will never be quite the same. And you won’t be able to turn back.”

I was pleasantly surprised by Sidekicked, John David Anderson’s first book in this superhero series. In comparison, Minion is a much darker tale (to be expected, as this is a story following villains instead of supers), but one that is every bit as unexpected and moving as its predecessor. In fact, I’d go so far as to say that Minion is better than Sidekicked because of its gravity and pathos, and its relatable approach to those who dabble on the darker end of the power spectrum. The most striking thing about this series is that it doesn’t simplify or dichotomize “Good” and “Evil.” Nor does the series make a cutesy play for villainy in the way of Dark Lord or Evil Genius, for example (not that there’s anything wrong with cutesy!). Rather, Minion examines one of the most powerful aspects of the superhero mythos: the blurred boundaries between good and bad, especially when one is trying to do the right thing. Don’t let the series packaging fool you; these are hefty books that deal with some meaty, serious issues. Abandonment, anger, frustration, helplessness – all are emotions that characterize young Michael as he tries to find his way in the world.

Luckily, Michael isn’t alone. Which brings me to the next best thing about Minion – the relationship between Michael and his father.

I looked up at my father. The man who had rescued me from St. Mary’s School for Wayward Boys. Who had brought me ice cream and bought me my first pair of tennis shoes and taught me how to play backgammon and what it’s like to sleep in on Sundays, the way God supposedly did. And I knew that no matter what was down there, it wouldn’t change the way I felt about him. I nodded, and he handed me the key.

I opened the door and flipped on the light.

And made my descent.

Starting Minion, I was a little worried because of the heavy use of standard tropes: i.e. orphaned, lonely protagonist grows up in an environment where he’s deeply misunderstood and gradually learns to use his power for nefarious means because it gives him a measure of control over his life and the lives of others. Imagine my surprise, then, when Minion takes things in a different direction – Michael is adopted by a man who is lonely and has some deep secrets, but who loves and respects his boy. The element of choice is what’s so beautiful in this book and in the relationship between the mad Professor and his charge. It’s clear from the outset that the Professor works for some shady figures and that he knows about Michael’s ability (hence, why one would think he adopts the kid in the first place). But knowing that, the Professor waits until his son is old enough to understand before offering to tell Michael what he does for a living. Even then, Michael is the one who makes the choice to open the box, to go down the stairs, to help his father. Of course, the question remains as to whether or not a thirteen year old can fully understand and consent to such acts – but the way John David Anderson writes the relationship between father and son feels believable and built on a place of trust and honesty. And I like that, very much.

On the negative side, however, Minion suffers from a distinctive and shocking dearth of female characters. Let me rephrase that: as it stands, the female characters in Minion exist solely to support or propel male characters along their respective arcs. The novel features just two female characters: Michael’s love interest Viola (who, predictably, is more than she seems), and his mother (whose backstory we hear near the end of the book). Considering how well the male characters are written in this book, it’s a shame that the women are so reductive – I can only hope that should there be any other books in this series, we’ll gain a little more perspective.

This one complaint aside, ultimately, Minion is a strong book. Better than its predecessor and full of emotional resonance, I thoroughly enjoyed this companion novel and certainly recommend it.

Notable Quotes/Parts: You can read a sampler online HERE.

Reading Next: So You Want to Be A Wizard by Diane Duane