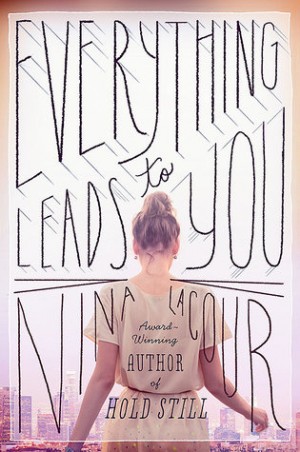 Title: Everything Leads to You

A love letter to the craft and romance of film and fate in front of—and behind—the camera from the award-winning author of Hold Still.

A wunderkind young set designer, Emi has already started to find her way in the competitive Hollywood film world.

Emi is a film buff and a true romantic, but her real-life relationships are a mess. She has desperately gone back to the same girl too many times to mention. But then a mysterious letter from a silver screen legend leads Emi to Ava. Ava is unlike anyone Emi has ever met. She has a tumultuous, not-so-glamorous past, and lives an unconventional life. She’s enigmatic…. She’s beautiful. And she is about to expand Emi’s understanding of family, acceptance, and true romance.

Why did I read this book: I was in the mood for a romantic ContempYA and this seemed to fit the bill. Plus, I heard good things about it from different trusted sources.

There is a recurring motif in Everything Leads to You that speaks to the magic of cinema – and consequently, of stories – and how it is possible to be both sweep off your feet by a story and still be aware of its inherent nature as fantasy, as construct. This is very true for Emi, who is a child of Hollywood and whose work as a set designer intern has placed her in a position to be deeply cognisant of what she calls “collapse of the fantasy” (when you know everything that goes behind the cameras in order to create that imagined world) but whose love for cinema – the creation of it, the experience of – still runs deep and true. It is that and the way that the story itself and its progression mimic that idea, more than anything else, that makes Everything Leads to You such an interesting, engaging novel.

It starts with the death of one of Hollywood’s most iconic actors, one of Emi’s most beloved stars, someone whose private life has been shrouded in mystery. The discovery of a long-lost letter changes everything: the legendary actor might have had a daughter and all of a sudden finding her becomes really important for Emi and her best friend Charlotte.

Their investigation leads them to Ava, a young girl whose life so far has been tumultuous and difficult. Ava is beautiful and complicated and Emi starts to fall for her as the two girls become even closer when they start working in the same movie. And if at first Emi looks at Ava as some impossibly tragic and romantic ideal, soon she will realise that the reality is different from any imagined fantasy.

Everything Leads to You is probably the closest thing to a RomCom in book format – from character’s arcs to story progression, from storytelling to hopeful ending – I can think of. I loved it. I loved it for the romance between the two girls that somehow managed to be both understated and grandiose. It’s a quiet romance in many ways but also one where you can almost hear the unsaid things and the sweeping music score in the background when they kiss for the first time. I loved it for the acknowledged differences between them – especially that of class and privilege. Emi’s life has been easy, she has the best of everything, enough money to not have to worry and a nice, supportive net of family and friends as well as the privilege of being able to come out as lesbian without any problems.

As a cinema lover, I also appreciated to see Emi’s relationship with cinema, that shared interest with her parents and close friends being played as something very personal rather than universal. Their appetite for the type of stories they love, for how they approach cinema is something that is theirs, not necessarily something to be immediately experienced the same way by everybody else.

Everything Leads to You is lovely and romantic and thoughtful. Very highly recommended.

Notable Quotes/Parts: One of my favourite things about the novel was following Emi when she was doing her job. She was passionate about it and really good at it too. Plus, it made me think of these different sides to making a movie, I never thought about before. Here is a good quote about it.

This is what I love about production design. The writers imagine the story, tell us where people are and what they do. The actors embody the characters, give them faces and voices. The directors and producers transform an idea into something real. But the art department, we do the rest. When you see their rooms and you discover that they love a certain band, or that they collect seashells or hang their clothes with equal space between each perfectly ironed shirt or have stacks of papers on their desks or a week’s worth of dirty dishes in the sink and bras strewn over brass doorknobs—all of that is us.

The art department creates the world. When you walk into someone’s house and you see all of their things—the neatness or the clutter, the objects they have on display—that’s when you begin to really know someone. Maybe there’s a guy you think is your friend but then you go to his house and discover his walls are covered in taxidermy animals and trophies and you never even knew that he hunted. Maybe it’s creepy, maybe the mounted heads look deranged, not preserved exactly right. Or maybe they’re perfect and you can tell he’s proud, that he’s really good at something. Either way, it makes him more interesting. All of that is important and a lot of the time it isn’t in the script; it’s something the art department gets to imagine.

Reading Next: Complicit by Stephanie Kuehn