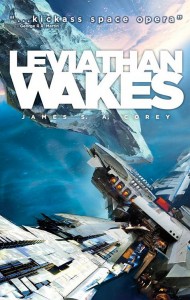 Humanity has colonized the solar system – Mars, the Moon, the Asteroid Belt and beyond – but the stars are still out of our reach.

Jim Holden is XO of an ice miner making runs from the rings of Saturn to the mining stations of the Belt. When he and his crew stumble upon a derelict ship, The Scopuli, they find themselves in possession of a secret they never wanted. A secret that someone is willing to kill for – and kill on a scale unfathomable to Jim and his crew. War is brewing in the system unless he can find out who left the ship and why.

Detective Miller is looking for a girl. One girl in a system of billions, but her parents have money and money talks. When the trail leads him to The Scopuli and rebel sympathizer Holden, he realizes that this girl may be the key to everything.

Holden and Miller must thread the needle between the Earth government, the Outer Planet revolutionaries, and secretive corporations – and the odds are against them. But out in the Belt, the rules are different, and one small ship can change the fate of the universe.

Stand alone or series: Book 1 in the Expanse series

Why did I read this book: Having tried and enjoyed MLN Hanover’s Black Sun Daughter books as well as Daniel Abraham’s fantasy writing with this year’s release of The Dragon’s Path, I was intrigued when I learned that Abraham/Hanover also wrote Leviathan Wakes with GRRM’s assistant Ty Franck under the James S.A. Corey nom de plume. Solid synopsis, great reviews, and a wicked fine cover (look at that baby! She’s gorgeous.) only cemented my book-greed.

Humankind has found a way to expand from the inner planets of Earth and Mars to the further reaches of the Solar System, with colonies and outposts along the asteroid belt to the moons of the great gas giants. Though people may have been able to build ships with the ability to traverse the solar system, light-speed travel (or anything even remotely approaching luminal speeds) remains a distant goal; the stars an unattainable, unfathomable mystery. All that changes, however, when the crew of ice-mining vessel the Canterbury pick up a distress beacon from a wayward starship amongst the rubble of Saturn’s rings. When executive officer Jim Holden and a small landing crew investigate the cold, breached hull of the Scopuli, they discover a dead ghost ship and a beacon powered by a Mars-branded transmitter. Moments later, Holden and his handful of crewmates watch as impossible cloaked ships appear and nuke the Canterbury, vaporizing the hundreds of souls aboard. Terrified and enraged, Holden broadcasts the event, pointing the finger at Mars as the responsible party.

On the Belt outpost of Ceres, run-down detective Miller goes through his usual routine of keeping the peace between civilians, the law, and organized crime syndicates. When Holden’s foreboding message reaches the settlement, however, the tenuous coexistence goes to hell. Long unsettled with their outsider status, taxed and levied by the superpowers of Earth and Mars, the Belters rise up against anyone with the stocky appearance that comes from growing up in full gravity. As human civilization inches ever closer to total annihilation and full-scale interplanetary war, Miller doggedly works on his last case – a routine missing persons job that turns out to have much deeper implications than anyone could have expected. As Miller uncovers the whereabouts about his erstwhile heiress and Holden and his crew try to survive numerous close encounters with blood-hungry political parties on all sides of the war, a deeper, more terrifying truth comes to light, and humanity may never be the same again.

So far as cinematic sci-fi goes, Leviathan Wakes is as entertaining and summer-blockbuster as you can get with a 600 page book. Beginning with an undeniably awesome hook (comparable to an X-Files episode intro, right before that sweet Mark Snow track begins to roll), Leviathan Wakes manages to be both a space opera and a futuristic hardboiled noir-style detective yarn. As opposed to the trend of many space operas, however, this first novel in the Expanse series is deceptively insular, as humanity is confined to the sandbox that is our local solar system. As such, the strongest element of this book lies with its construction of this future human society, scattered across the planets and asteroid belt, as the tensions between Mars, Earth and the Outer Planets Association (the OPA) mount and the fate of mankind hangs in the balance. Like many familiar colonization stories, it’s hard for a superpower, or corporation, or any form of tyrant, to reign over a distant outpost, and the rebellious attitudes of the OPA have a familiar revolutionary ring. The added difference of physiological appearance between those stockier humans accustomed to life in 1G, versus the elongated Belters adds an interesting new level of discrimination, handled expertly by Mr. Corey (or should I say, Messers Abrams and Franck). Though this certainly isn’t a hard science fiction rendering, Leviathan sticks to the realms of technical plausibility, spurning Battlestar Galactica-esque FTL drives and taking care to address the physical tolls of accelerated space travel, heat signatures, and radiation woes.

From a storytelling perspective, Leviathan Wakes also does an admirable job for a first novel in a series. The plotting is solid, jumping from incredible opening hook (one of the rare times I was pissed off that my train was actually on time) to a burst of explosions and near-death escapes. There are two storylines tracked along the course of the novel, told in alternating protagonist/chapter style (not unlike epic fantasy). Though the book is a bit overlong and tends to drag in the midsection, especially as only marginal progress is made with the overall mystery that is at the core of the book, when the main thread is picked back up the novel ends with a hell of a bang. The only tedious parts of Leviathan Wakes concerned the main characters, as the cast is somewhat underdeveloped in relation to the worldbuilding. The two leads and narrative focal points of the book are archetypal, with the aging, divorced, drunk, Humphry Bogart-esque gumshoe and the idealistic, charming XO-reluctantly-cum-Captain. Though there is a solid attempt at providing motivations and backstories for these characters, I honestly could have done with a little less exposition – there’s far too much time spent on menial exchanges (Miller with his partner, Miller at one of many bars; Holden feeling the tiring, ball-retracting effects of g-force acceleration, and so on and so forth). That’s not to say I didn’t enjoy the characters – quite the contrary. Though, to be perfectly frank, Miller’s character arc was far more engrossing to me than Holden’s annoyingly blase (and frustratingly stupid) self-righteousness. There’s also a female component to the cast that I appreciated, as Naomi (the new XO after Holden’s unwitting promotion) is both capable and confident (and totally doesn’t settle for Holden’s BS). Of course, there’s also the allure of the mysterious Julie, the disappearing dame that started it all, who we only meet directly in the prologue of the book.

Despite some unevenness midstory and a bit of tedious repetition in the character building department, Leviathan Wakes ends with a dramatic flourish, full of promise for the subsequent books in the Expanse series. I, for one, will definitely be around to check them out.

The Scopuli had been taken eight days ago, and Julie Mao was finally ready to be shot.

It had taken all eight days trapped in a storage locker to get to that point. For the first two she’d remained motionless, sure that the armored men who’d put her there had been serious. For the first hours, the ship she’d been taken aboard wasn’t under thrust, so she floated in the locker, using gentle touches to keep herself from bumping into the walls or the atmosphere suit she shared the space with. When the ship began to move, thrust giving her weight, she’d stood silently until her legs cramped, then sat down slowly into a fetal position. She’d peed in her jumpsuit, not caring about the warm itchy wetness, or the smell, worrying only that she didn’t slip and fall in the wet spot it left on the floor. She couldn’t make noise. They’d shoot her.

On the third day, thirst forced her into action. The noise of the ship was all around her. The faint subsonic rumble of the reactor and drive, the constant hiss and thud of hydraulics and steel bolts as the pressure doors between decks opened and closed. The clump of heavy boots walking on metal decking. She waited until all the noise she could hear sounded distant, then pulled the environment suit down off of its hooks and onto the locker floor. Listening for any approaching sound, she slowly disassembled the suit and took out the water supply. It was old and stale; the suit obviously hadn’t been used or serviced in ages. But she hadn’t had a sip in two days, and the warm loamy water in the suit’s reservoir bag was the best thing she had ever tasted. She had to work hard not to gulp it down and make herself vomit.

When the urge to urinate returned, she pulled the catheter bag out of the suit and relieved herself into it. She sat on the floor, now cushioned by the padded suit and almost comfortable, and wondered who her captors were – Coalition Navy, pirates, something worse. Sometimes she slept.

Additional Thoughts: Love the cover art as much as I do? Make sure to pop over to the Orbit Blog to download awesome Leviathan Wakes wallpaper. 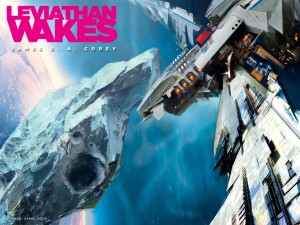 And, if you’re interested in some of the thought process behind the book, check out James S.A. Corey over at John Scalzi’s in a new Big Idea post.

Reading Next: The Dead by Charlie Higson