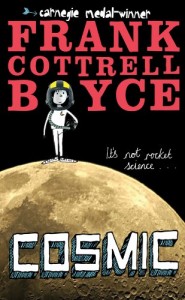 Genre: Contemporary (with a bit of Sci Fi since it’s sort of set in SPACE) / Children’s

Liam has always felt a bit like he’s stuck between two worlds. This is primarily because he’s a twelve-year-old kid who looks like he’s about thirty. Sometimes it’s not so bad, like when his new principal mistakes him for a teacher on the first day of school or when he convinces a car dealer to let him take a Porsche out on a test drive. But mostly it’s just frustrating, being a kid trapped in an adult world. And so he decides to flip things around. Liam cons his way onto the first spaceship to take civilians into space, a special flight for a group of kids and an adult chaperone, and he is going as the adult chaperone. It’s not long before Liam, along with his friends, is stuck between two worlds again only this time he’s 239,000 miles from home.

How did I get this book: Bought (Kindle edition)

Why did I read this book: Jaclyn Moriarty talked about it on her Smugglivus’ guest post and I bought the book after I read the post.

Cosmic proves rather successfully that the most ludicrous premise can turn into a wonderful, believable story in the hands of a competent writer:

Liam Digby is only 12 but he is VERY tall. He is so tall that people actually think he is an adult (the fact that he has Premature Facial Hair also helps). For most part, Liam enjoys the benefits and advantages of being regarded as an adult: he goes to places he is not supposed to; he gets to drive a Porsche; and after passing the height restrictions, enjoys the scariest rollercoaster ever: the Cosmic. On the downside, being too tall and adult-like somehow creates unreasonable expectations and it’s not unusual for Liam to hear the words: “a big guy like you, you should know better” .

Still, the perks outweigh the disadvantages especially when – by pretending to be an adult AND a father (to his friend Florida Kirby) – Liam manages to win a competition to go to the world’s newest, most exciting theme park IN CHINA, The Infinite Park. Whilst their parents think they are going to a school trip to the Lake District, celebrity-obsessed Florida and Liam along with 4 other winners and their kids travel to China, where they learn that the five kids will actually be going to SPACE in the Infinite Possibility Rocket “ride” and only one of the adults get to accompany them; this adults will be voted by the kids after going through a series of tests that sort of come across as Survivor Meets Charlie and the Chocolate Factory.

Which is how 12 year-old Liam ends up in a rocket. Lost in space. With 5 kids. As the sole responsible ADULT. Where he is recording a message to his father explaining how he ended up there – which is actually the book itself.

Do you see what I mean by a “ludicrous” premise? But the thing is, and I can’t stress this enough: Cosmic is less about how Liam ends up in Space and more about what it means to be an adult or a child and about unreasonable expectations and about

Between the extremely funny:

Even though I could barely see the Premature Facial Hair, once I knew it was there, I couldn’t stop thinking about it. It was ticklish and it was tempting to stroke it. Stroking it made people notice it and when people noticed it then tended to shout, ‘Wolverine’ and worse. Which is why I decided to get rid of it. I slashed at the brown candyfloss with dad’s razor, which did get rid of it. Sadly it also got rid of a lot of blood. (…) Dad said, ‘He’s been shaving.’ ‘What?’ said Mum. ‘He can’t shave! He’s much too young to shave.’ ‘Well, he’s definitely too young to have a beard,’ said Dad. And he showed me how to shave in a less life-threatening manner. ‘The only thing is,’ he said, ‘now you’ve started, you’ll have to carry on. The hairs will get harder and harder the more you shave them.’ So I don’t get wisps of candyfloss any more. I get this stuff that looks like naturally occurring toilet brush.

And the very moving:

One person has just left the crowd and is heading over to me. It’s Dad. He’s walking towards me like there’s some special gravity pulling him towards me. And maybe there is. Maybe everyone’s got their own special gravity that lets you go far away, really far away sometimes, but which always bring you back in the end.

this book was almost perfect in tone – it does reveal certain Truths without being didactic and it made me laugh and tear up in equal measure. Interestingly both laughter and tears meet up perfectly in the character of Florida Kirby – oh how I loved her and her sadness and smartness hidden behind her celebrity-obsessive personality.

I think Cosmic would be enjoyed by just about everyone in the world and in the words of Gob Bluth: “What you need to know… [dramatic pause] Is that it’s magic” or more to point: it is totally cosmic. Read it.

‘Ohmygod, the Earth has gone! What have you done with the Earthyouidiot!’

And this interaction between Liam and his dad after Liam disappeared for an afternoon of fun at the Cosmic ride and made his father worried sick:

(…) ‘And then I find you cheerfully waving and eating chips on a fairground ride. How d ‘you think I feel about that? ‘Happy that I’m alive?’ He glared at me and said, ‘Possibly. In some remote and noble corner of my heart, yes. But mostly no.’ I said, ‘I’m sorry.’ He then said ‘You should know better, a big lad like you.’

Reading Next: 13 Treasures by Michelle Harrison