For every readalong book, we’ll structure this a little bit differently than our usual Joint Review fare – first, we’ll give our (brief!) opinions regarding the book, then we’ll tackle some discussion questions. Finally, we’ll ask YOU to join in. 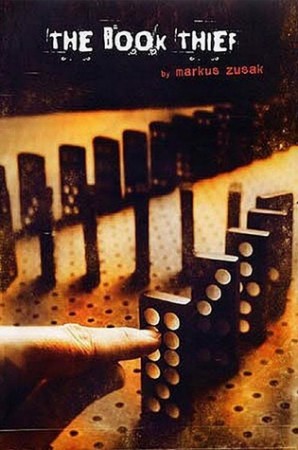 In superbly crafted writing that burns with intensity, award-winning author Markus Zusak, author of I Am the Messenger, has given us one of the most enduring stories of our time

Ana’s Take: I managed to somehow miss reading The Book Thief all these years, despite the awards and the overwhelming praise it has received. I was cautiously happy when it was picked for this month’s readalong. And it started really well for me – I was charmed by the narrative voice and I was emotionally shaken in the beginning but during my reading of the book, something happened and I felt utterly disconnected from the story by the time I was finished with it. Am I heartless to admit I was wholly unaffected by the ending?

I’ve been thinking about it and the truth is: I felt utterly manipulated by the author into feeling a certain way about the story. I felt there was lot of hand-holding like the author couldn’t trust its audience to understand the severity of the events displayed. In the end, although I don’t regret reading it, I can’t really say I loved it.

Thea’s Take: This is an interesting OSW pick, because I actually read this book when it first came out in 2006, and I remember enjoying it very much, although I was never really compelled to pick it up for a reread. When The Book Thief was selected for this month’s readalong, I was excited (good timing, what with the movie adaptation and all), but also a little anxious. And you know what? Uupon rereading The Book Thief, I found so many stylistic choices that grated on my sensibilities, now, as a reader. I also felt distanced from the book, apathetic towards the characters and the overall story – perhaps because I knew where everything was going? Alas. This reread convinced me that The Book Thief does not quite stand the test of time (in my opinion, of course).

1. The most distinctive thing about The Book Thief is the narrative. Not only the light, amusing style and voice which are at odds with the heavy topic but also WHO the narrator is. What do you think of these choices?

Ana: I am torn. I am torn because I am trapped between trying to understand the intention and working from what I actually got from the writing. I think the light, amusing style works? And it makes sense in a weird way: after all Death, the narrator, is trying to show its sense of humour, right? That its outlook in life is also extremely…cheesy and overly sentimental also kind of makes sense in its meta-commentary to discredit any sense of utter seriousness one would expect from Death.

But in a way that choice does perhaps backfire? It’s not that I feel that the narrative voice makes light of the serious topics presented in the story but I guess that in a way, it does allow for a sense of remoteness that end up making the characters and the events almost cardboard cut-outs of what one would expect from a story about World War II. I can’t but to feel that the gimmick of having an Amusing!Death! narrator took over to the detriment of anything else.

Death is also an omniscient narrator but an omniscient narrator with opinions and those opinions at times made me positively queasy. One such opinion seemed to run through the novel: the thought that some people managed to survive and remain alive because they “really wanted to live” or they have a strong “will”. As opposed to what exactly? 50 million people with a death wish??? Ugh x 1000.

It unsettled me considering this was a thought from not only death himself but other characters as well and it goes unchecked and unchallenged in the narrative.

Thea: This time around reading The Book Thief was a bizarre experience. The thing that bothered me the most about the book was the narrative style – not that I mind Death as the narrator, nor am I opposed to what Zusak tries to do with his lighthearted tone. The thing that bothered me the most was the incessant, heavy-handed foreshadowing. Death is omniscient and reporting on Liesel’s story after the fact, and so can make all kinds of little ominous hints that The Good Times Are Ending, or overly descriptive/attempts at poetic asides, all of which are fine in small doses but utterly annoying when repeated ad nauseam.

I also echo Ana’s discomfort with the notion that survivors are the ones that stubbornly cling on to life more than anyone else. No. Sometimes death happens, and often it has nothing to do with one’s strength of will or desire to survive. This attitude, especially given the Holocaust setting, is NOT ok.

2. The book is set during a specific time in the history of the world, i.e. World War II. What did you think of the author’s choice of depicting the story from the point of view of a largely German cast?

Ana: This is probably one aspect of the novel that I enjoyed the most. I am not sure if any historical research was done but I loved the snapshot of one small village and the different ways that people engaged with not only with the Nazi rule but with its ideas as well. From the ones who fully appreciated, internalised and believed in what was being said and done to the ones who had to conform out of fear and reprimand. I appreciated the story of good German people trapped in an impossible situation. Sometimes it is easier to colour all of Germany at the time as a terrible place full of horrible, evil people than to try and understand that the situation was much more complex than that.

Thea: I have absolutely no qualms with the German perspective! In fact, I applaud this character choice. To see the unfolding of WWII through the eyes of German citizens – especially a small, near impoverished town like Liesel’s – is a unique and memorable perspective. I love that Zusak does not pass judgement on the characters in the text, but shows them as ordinary people trying to live during an impossible, terrible, horrific time.

3. With regards to characters: who are your favourites and why? Expanding a bit on this question: what did you think of the female characters as portrayed in the book?

Ana: Do I have any choice but to say Hans, here? He was such an example of sheer Good that it is impossible not to like him but I can’t help but repeat: he was so good as to be a cardboard pattern for Good?

With regards to the female characters – we were asked on Twitter yesterday what we thought of the female characters and if the main character had any positive female friends. We thought that was a really good point and made me think that actually, the answer to this question is ….more or less. Undoubtedly the most important characters in the book – the ones written more in depth, the ones given a richer internal life are all men: Hans, Rudy and Max who are all portrayed as gentle and caring souls.

Then you have the female characters who, although important to Liesel, were not on the same level as the male ones. The foster mother was a shrew who only showed her love through spankings and screaming but had really a Hidden Heart of Gold. Needless to say, I was not impressed.

Thea: It’s an interesting thing to ponder. See, when I first read this book, I quite loved Liesel and Hans, and Rudy, and Max. I cared for these characters, I sympathized with them, I desperately rooted for them.

This time around…I felt like there was a disconnect. As I said in an email to Ana earlier, the characters all felt a little rough – in particular, the female characters. I still love Liesel, but I agree that the male characters are given a broader range of emotion and depth on the whole. The secondary female characters in this novel are reduced to tropish stand-ins – the nagging shrew, the steely shopkeeper, the hollow ghost of a wife. That’s frustrating.

4. What is your favorite thing from this book? What weren’t you enthusiastic about?

Ana: To start with I like Death’s voice and was amused but this soon wore off. As you can probably tell by now, I was very disappointed – I expected a lot more. Sorry to be a downer, everybody!

Thea: I love the idea behind the story most of all – whether or not the book delivers on that promise is another animal. I like the structure of the novel, with its chapters within chapters, and I like heroine Liesel very much indeed. That said, the stylistic choices, the irritating foreshadowing, the lack of emotional resonance or depth… that bothered me. I’m also shocked at how much my reading of this book has changed over the course of 8 years!

5. Have you read any of Markus Zusak’s books before? Will you try any others if you are a newbie to his books?

Ana: To be completely honest? I was not really impressed with the book enough to want to read more. Unless you all think this is a huge mistake I am making?

Thea: This is the only Zusak book I’ve read. I’ll certainly give him a chance in the future – although I’ll be wary of the reread. I actually haven’t seen the film adaptation of The Book Thief yet – anyone here have thoughts? I will give it a rental to see how the characters come off on screen.

Now over to you! Please feel free to engage with the questions (and our answers), come up with your own talking points, and/or leave links to your reviews!